In terms of standard connectivity, the iPad offers Wi-Fi (802.11n) and Bluetooth 2.1+EDR, with 3G models also offering cellular data connectivity. All iPad models have an accelerometer, compass, speakers, a microphone, and a 30-pin dock connector. The iPad also offers a claimed 10 hours of battery life for viewing video, with 1 month of standby battery life.

Models with 3G will be unlocked and will be able to use GSM micro SIMs. In the U.S., AT&T will offer two data plan options $14.99 for up to 250 MB per month and $29.99 per month for unlimited data. No contract is required for either option, and free access to AT&T's Wi-Fi hot spots is included. Data packages for iPad users outside of the U.S. will by in place by June.

The iPad will have standard apps for personal information management, including an address book and calendar, along with e-mail, Safari, Google Maps, and Notes. A special version of iTunes is also on board to provide an optimized browsing experience on the device's 9.7-inch screen.

Accessories will also be available for the iPad, including a dock with a mechanical keyboard that will accommodate the iPad in portrait orientation and a case with a built-in stand for video viewing. Prices on these accessories were not announced. The iPad also supports Bluetooth keyboards.

Multiple demos showed unmodified iPhone apps working on the iPad at original resolution and scaled up to take advantage of the iPad's increased screen real estate. According to Scott Forstall during his time on stage, the iPad can run "virtually every" app without modification, with an on-screen button to scale an app's resolution up and down as desired. iPhone users will not need to re-purchase apps to load them onto an iPad. 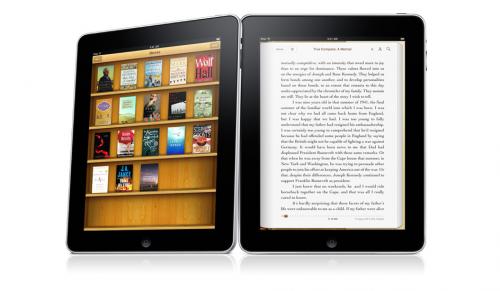 As expected from recent rumors about Apple's negotiations in the past few weeks with major media publications, the New York Times was on hand to demo a dedicated New York Times app, stating they were proud to "pioneer the next generation of digital journalism." The app offers an expanded view of the paper's content with in-line video viewing and synchronization capability with the iPhone app.

Jobs then unveiled the iBooks app, referencing Amazon's Kindle and describing that they wanted to "stand on their shoulders and go a little further." The iBooks app has a store - the iBookstore - featuring content from Penguin, HarperCollins, Simon & Schuster, Macmillan, and Hachette Book Group. iBooks uses the open ePub standard and offers tables of contents and intuitive page navigation on the iPad, along with the ability to read in portrait and horizontal orientations using the built-in accelerometer. Jobs highlighted True Compass by Edward M. Kennedy, describing its $14.99 price tag in the iBooks store.


New iPad-specific versions of iWork applications also made an appearance at the event, with demos of Keynote, Pages, and Numbers by Phil Schiller on the iPad. Schiller pointed out specialized on-screen keyboards and drop-down menus to spotlight the ease of use of these apps on the iPad. The iWork apps will cost $9.99 each.

At the end of the event, Jobs described the iPad as the company's "most advanced technology in a magical and revolutionary device at an unbelievable price." He also pointed out that there are over 125 million iTunes accounts with credit cards and that using the iPad will be second-nature for the more than 75 million iPhone and iPod touch users.

Sounds very revolutionary to me.

hey - heres an idea Apple - rather than enter the world of gimmicks and toys, why dont you spend a little more time sorting out your pathetically expensive and crap server line up?
or are you really aiming to become a glorified consumer gimmicks firm?
W

Blah blah. The haters come out, as usual.

1024x768 IPS LED-lit 9.7" display. Like the new iMacs, the display is KEY. People like the pretties, and this is DAMN pretty! I can't wait for it.
Reactions: svanstrom
A

What? No Core i5 MacBook Pros? Boooo!

Nice job with the 'pad, though.

this should be compared to davinci, or bango....
H

Great, another thread for all the people that were expecting a $800 - $1000 tablet with potential 2 year phone contract to whine about getting a $500 device with no contract.
Reactions: svanstrom

I can picture buying this and using it exclusively in the bathroom while I go number two...
Reactions: CakeJronkJake
T

Although nice there is nothing "magical" or "revolutionary" about the device. I was expecting so much more from apple on this one.

MacRumors said:
At the end of the event, Jobs described the iPad as the company's "most advanced technology in a magical and revolutionary device at an unbelievable price." He also pointed out that there are over 125 iTunes accounts with credit cards and that using the iPad will be second-nature for the more than 75 million iPhone and iPod touch users.

+The device itself looks great - hardware wise, as does the extra UI elements. Apple made good use of the extra real estate
+iBooks application looks good.
+The price is also good.
+ability to run existing iPhone apps - but look stupid at their 'regular' size - stuck in the middle of a huge screen
+HD great
+Ability to connect physical keyboard is also a positive.
+iWork( though MS Office would be better for a lot of people - maybe its coming?)
+very nice battery life

-However, lack of multi-tasking is a real eye opener.
-Lack of Flash - Steve went onto one website - that had flash and of course didn't display probably. I really wish Apple would make Flash optional.
-No ability to 'side load applications' - which isn't a surprise since its mobile OSX.
-Ultimately, a giant iPod Touch
A

Will it run Linux?

Is there confirmation it doesn't do multitasking, or is that just assumed since they didn't mention it?

Those price points are not appealing to me....at all

While I would have liked built in GPS & both forward & back cameras, this seems like a pretty solid device. I don't have much need for one right now, but I could see something like this catching on.
S

Okay so how long do we have to wait for MBP updates. . .

I don't care for the Pad I have an iPhone I don't need a bigger one. . . not hating but I don't have a need for it.

Will the high end 15" Pro work GREAT for heavy music production/movie production or wait for the i5 Cores?
S

why the frick wont they give us week-view calendar on the iPhone?

In a world where we are FINALLY appreciating widescreen movies and TV's are ALL moving to a 16:9 format why do we go back to a 4:3 aspect ratio on a brand new 2010 device!!

Everything is perfect for me, except the lack of GPS.

I am planning a huge road trip in the middle of the year and was really hoping I could use the new Apple awesomeness.

It's the one thing it's missing for me.

If free WiFi becomes widespread among businesses, it would reduce the need for the 3G model. Some stores have free WiFi for customers; the more the better.

I would opt for the $499 model. Then when I was in a store that didn't offer free WiFi, I would put a graphic on the screen in big bold letters indicating, "No Free WiFi Available!" and let others see it as they pass me by.

Does it have a headphone jack?

Is Apple going to develop custom processors for all of their products?

I want to see the benchmarks for this.

They have accomplished catching my eye, I think I may wait for larger flash capacities until I buy one. I'm a bit disappointed they didn't refresh the macbook pro's. No matter, I'm still another year until I'll be in the market for a new mbp... when my warranty expires! I'm also pleased that I can purchase one that does not contain 3G technology, although considering a contract is not necessary, perhaps I'll go for a non-contract data plan.