In the release notes for Safari 12.1, the new version of Apple's browser installed in iOS 12.2, Apple says that it is removing support for the "Do Not Track" feature, which is now outdated.

From the release notes: "Removed support for the expired Do Not Track standard to prevent potential use as a fingerprinting variable." 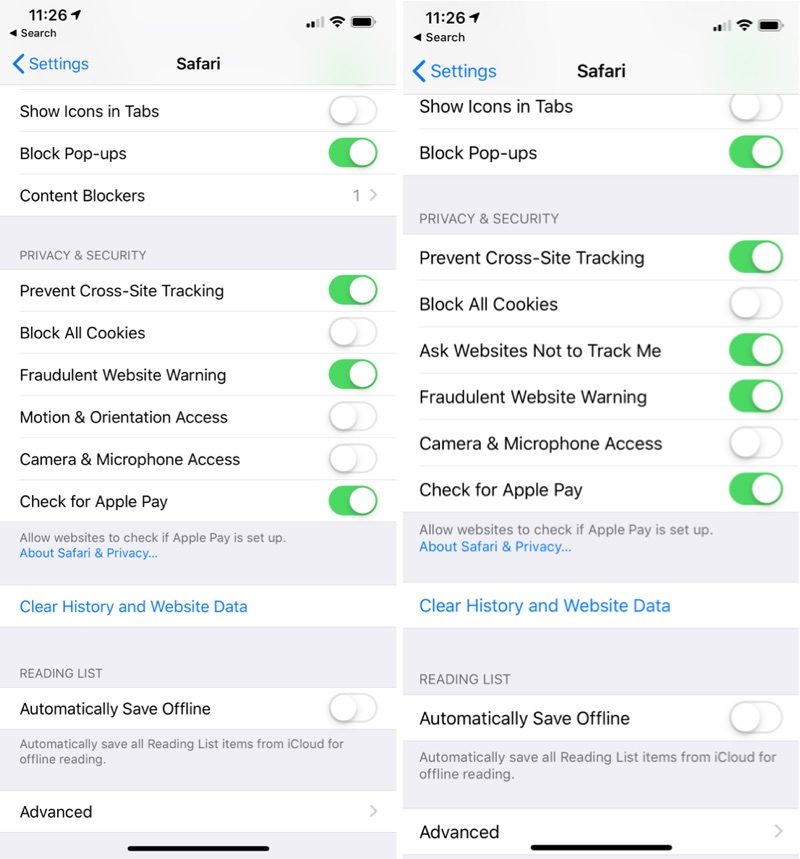 Do Not Track is no longer an option in iOS 12.2, as seen in iOS 12.2 screenshot on left. iOS 12.1.3 screenshot on right.​
The same feature was also removed from Safari Technology Preview today, Apple's experimental macOS browser, and it is not present in the macOS 10.14.4 betas. According to Apple, Do Not Track is "expired" and support is being eliminated to prevent its use as, ironically, a fingerprinting variable for tracking purposes.

"Do Not Track" is an outdated feature that was added to Safari quite a long time ago, first showing up in OS X Lion in 2011. Proposed by the FTC, "Do Not Track" is a preference that is sent by a user's browser to various websites requesting that advertising companies not use tracking methods.

It is entirely up to the advertising companies to comply with the "Do Not Track" messaging, and it has no actual function beyond broadcasting a user preference. All it does is say something to the effect of "hey, I prefer not to be tracked for targeted advertisements," which websites, advertisers, and analytics companies are free to ignore.

In the settings for Safari in iOS 12.2, Apple is no longer listing "Do Not Track" as a setting that can be toggled off or on, and in the Safari Preview browser, "Ask websites not to track me" is no longer listed as an option.

To replace Do Not Track, Apple has been implementing much more stringent Intelligent Tracking Prevention options, which do actually have a tangible effect and prevent the tracking methods that many advertisers and analytics sites use to detect your cross-site internet browsing.

Glad they did this - it was such a misleading option (in reality) one had to wonder if it was pushed forward by advertisers / trackers in the first place to give users a false sense of security.

Instead we got a million GDPR and cookie popups
Reactions: freedomlinux, Cameroncafe10a, Yugure and 16 others

That's funny. I just turned that on today with Firefox.

Same people that complain about the headphone jack, ethernet port, and the cd-rom drive being deprecated will also complain about this, and then comment how innovative it is to remove the do not track functionality and that "Timmy is greedy."

What else is new.
Reactions: pianophile, Advil, slineaudi and 7 others

Wow, so the do not track feature was used by ad companies to fingerprint you? These companies know no bounds
Reactions: Cameroncafe10a, twhart, fredrik9 and 6 others

It’s a little wonky, but cross-site tracking prevention, among other features like Safari Reading List and iCloud tabs and keychain are why I’m totally happy with Safari as my default browser.


az431 said:
Same people that complain about the headphone jack, ethernet port, and the cd-rom drive being deprecated will also complain about this, and then comment how innovative it is to remove the do not track functionality and that "Timmy is greedy."

I haven’t even unwrapped the lightning earpods that come with my iPhone XS. If you have a couple of good Bluetooth earphones it makes no sense to go back to wired.
Reactions: HacKage and Glockworkorange

I actually thought Do Not Track was a good idea at the time. Sure, advertisers didn't have to honor it, but they had incentive to. Few people turned it on, so advertisers wouldn't have a significant revenue loss in honoring it and it would boost their reputations. It could have even been a precursor to something with a bit more teeth, where governments could write laws criminalizing tracking such people. It would hardly have cured us of the growing threat to user privacy, but it would have at least done something about it. It was a rare moment where it looked like scummy advertisers and privacy advocates could actually come to some sort of positive agreement, however small.

The problem with it was that it all hinged on the option being disabled by default, so that only the rare unicorns who actually knew about it and wanted it would turn it on. Microsoft made the infuriating decision to blatantly violate this delicate contract by making Do Not Track enabled by default in Internet Explorer. So all that could happen from there was for the whole thing to come tumbling down. I vaguely remember some website trying to create a compromise where they would still honor the header if it came from a non-Microsoft browser, but I guess that kind of duct tape over the mess wasn't sustainable. Advertisers were spooked and it all ended sadly-ever-after.
Last edited: Feb 6, 2019
Reactions: bwillwall, AnonMac50, LV426 and 2 others
B

Get a Pi Hole. Job done.

az431 said:
Same people that complain about the headphone jack, ethernet port, and the cd-rom drive being deprecated will also complain about this, and then comment how innovative it is to remove the do not track functionality and that "Timmy is greedy."

Yea … I complain about the lack of the headphone jack
Reactions: whooleytoo, KPandian1 and David G.

Cuts down on ads, absolutely.

That feature was as useless as the headphone jack feature, so good on them for scrapping it as well. I'm all for more minimalist, streamlined software as well as progressive hardware. The jack was a security risk as well, as shown by the French team who hacked into a phone through the headphone jack.
Last edited: Feb 6, 2019
Reactions: FightTheFuture, HopefulHumanist and centauratlas

The article should also point out how "Prevent cross-site tracking" setting makes "Ask websites not to track me" setting unnecessary and irrelevant.
C

Wow, I knew the feature wasn't helping 100% because it was voluntary, but I didn't know it could be used against me.
N

To put things into perspective, the so called evil is advertisers setting cookies to track users browsing behavior. The "ultimate evil", the end game, the devil, is an AD that pops up on some page you visit that some algorithm calculated you might be interested in. Oh the horror.
(Yet everyone watches the Super Bowl and looks forward to seeing the ads... but I digress)

At this point (2019) everyone & their sister has or should have an AD blocker extension installed in their browser. Once installed, no amount of devious tracking cookies by advertisers can do anything... cuz the ad blocker blocks all the ads anyway.

So cookie tracking paranoia? Get over it (and use an ad blocker).

Run a Linux util on an iPhone? Interesting.

thecastle said:
Wow, so the do not track feature was used by ad companies to fingerprint you? These companies know no bounds
Click to expand...

they'll use everything at their disposal

What is browser fingerprinting?
L

nutmac said:
The article should also point out how "Prevent cross-site tracking" setting makes "Ask websites not to track me" setting unnecessary and irrelevant.
Click to expand...

Except, that's not true.

Try this test for tracking / browser uniqueness.
Click to expand...

Pfft, I never used that crap anyways. Just exercise a little caution, and advertisers won't have a clue who you are. 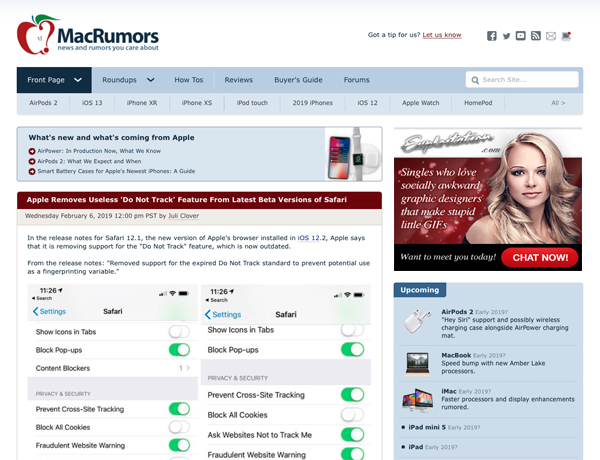 Calling it useless was generous. It was negatively useful.

Except that Chrome is sending every site you visit to Google, the biggest tracker of them all.

Safari is sending all site info to Google also, if you have "Warn when visiting a fraudulent website" enabled under Preferences > Security. Disable that for sure. It uses Google "Safe" Browsing to do that.
Reactions: fairuz
Z

JosephAW said:
That's funny. I just turned that on today with Firefox.
Click to expand...

Which does work and also enabled anti-fingerprinting at the expense of some sites not working correctly. I'm still figuring out the anti-tracking methods on FF 65/Dev 66.
Reactions: JosephAW