Amid widespread complaints over Apple's new iOS 6 Maps app, which replaced the Google-powered application that had shipped on iOS devices since the iPhone debuted in 2007, some observers have wondered how much of the shift was due to Apple's desire to reduce its reliance upon on Google and how much might be due to other factors. 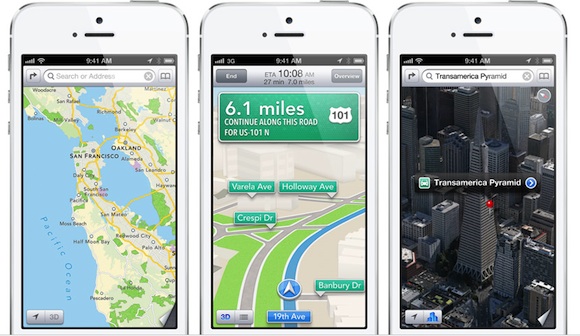 In particular, there has been some speculation that demands by Google could also have played a role in Apple's decision, with the suggestion being that Apple may have been forced to roll out its own mapping solution a bit sooner than it had planned for if its contract with Google had been running out.

The Verge now reports that such speculation is unfounded, with Apple and Google having had over a year left on their contract for Google's Maps app. Consequently, Apple could presumably have continued using Google's app in iOS 6 as it worked to improve its own mapping product for a launch with iOS 7 next year.

For its part, Apple apparently felt that the older Google Maps-powered Maps in iOS were falling behind Android -- particularly since they didn't have access to turn-by-turn navigation, which Google has shipped on Android phones for several years. The Wall Street Journal reported in June that Google also wanted more prominent branding and the ability to add features like Latitude, and executives at the search giant were unhappy with Apple's renewal terms. But the existing deal between the two companies was still valid and didn't have any additional requirements, according to our sources -- Apple decided to simply end it and ship the new maps with turn-by-turn.
Click to expand...

Apple's decision apparently caught Google off-guard, as Google is reportedly still several months away from having a standalone maps app ready for submission to the App Store.

Article Link: Apple Reportedly Had Over a Year Left on Maps Contract with Google

Billions in cash pissing away money on a not needed maps app and yet still no desktops. Apple is officially my gadget only supplier.
Comment

If this is true, then Apple really let us (the customer) down. As a software developer, I don't see any down side (other than cost) to taking the time needed to put out a fully baked product. As far as cost goes, Apple has $100 B in the bank. I think they can afford it.
Comment

Well, they should've used it. And also used that time to fix all the issues with Apple Maps before releasing it.
Comment

What a frigging boneheaded move. The person responsible should be questioned closely. And I daresay that Steve would never have released a new service that was worse than the old.
Comment

The TbyT directions more than make up for any other shortcomings for me anyway.
Comment

They hate Google. Is it hard to understand?
Comment

Sucks for us users but Apple needs the data to start making major improvements, better to do it now (should have done it a while back) and suffer people being annoyed.
Comment

I would think that if their contract with Google was expiring they would want to move to another option at least a year before the end of the contract. This way those who don't upgrade won't be left without a maps option at all.
Comment

iGrip said:
What a frigging boneheaded move. The person responsible should be questioned closely. And I daresay that Steve would never have released a new service that was worse than the old.
Click to expand...

im assuming the person responsible was either Cook or Forstall. And wasn't it Steve who decided to go thermonuclear on Google? Steve deserves a lot of the blame for this IMO.
Comment
G

Android phones have had far superior native maps/navigation since day 1, and I agree with the article that the gap was widening with each release. Apple made the right move. They'll get maps right eventually.
Comment

gmanist1000 said:
They hate Google. Is it hard to understand?
Click to expand...

Is it hart to understand that they hate Google? No. Is it surprising that they let that hate result in a sub-par user experience like this? Yes.
Comment
M

It's time apple allows users to assign default apps for, web browser, email client & maps. Users that don't care can live with defaults, the others can optimise their experience.
Comment
N

Oh, wow. If this is true, then Apple really screwed us over. What on earth were they thinking?
Who cares about turn-by-turn directions or fancy 3D-buildings when your core data is so broken?
Comment
H

google should work out a free deal with apple to allow google maps on the app store, and charge $1 dollar for it. when they rake in a few million dollars from the sale they won't need to say anything more on the subject and apple will continue to look like numbnuts for making this short-side anti-customer move.

disclaimer: i'm no fanboy (of anything) and i own an iphone 5. google maps is just better and more accurate.
Comment
U

Same. Maybe its cause I'm from Canada but it seems to work ok for me. I'm only on the 4 though so no idea if that 3D stuff is wonky.
Comment
C

Presumeably the fact that IOS5 still uses google maps proves there must still be some active contract in place anyway else maps in io5 would stop working?
Comment
N

That's exactly what Apple wanted! They didn't want people to be able to download an alternative...
Comment
S

Didn't Google also start charging for use of their map service? That is why iPhoto doesn't use it anymore, no?
Comment
C

You know I'm happy about what happened with Maps because Apple won't let my phone have all the feature...

Thanks Apple for saving me from a bigger disappointment!!!
Comment

gmanist1000 said:
They hate Google. Is it hard to understand?
Click to expand...

They should not sell their customers short, just to take a jab at Google. That's bad business.
Comment
B