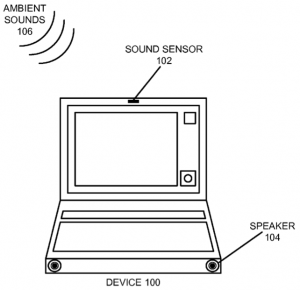 A new patent application published today reveals that Apple is researching the use of ambient sound sensors to automatically adjust speaker and mobile phone ringer volume based on the device's environment.

For instance, a user who adjusts the volume of a mobile phone ring tone for a loud environment may later move to a quieter environment, where the loud ring will be disruptive. Similarly, powering up a laptop computer in a quiet lecture hall or home may result in an inappropriately loud and disruptive boot sound. Alternatively, a volume level which is optimized for a quiet environment may not be detectable if the associated device is moved to a louder environment, which can result in a missed audio signal.
Click to expand...

The July 2007 patent application, credited to illumination specialist Peter Mahowald, describes a number of different measurements, including maximum, minimum, or average sound level and frequency or type of sound, that could be used as a basis for automatic audio output adjustments. The application also describes an adaptive learning component in which the system would monitor whether a user overrides the system's automatic settings in a given environment and would incorporate the user's preferred settings into its future actions.

While Apple has given no indication that they plan to incorporate this technology into their products, the company already makes extensive use of ambient light sensors in the iPhone, iPod touch, and many of their computers.

Even some sports cars have had adaptive radio volume for years.
Comment

I wish they had this for tv.

Nothing like cuddling with your girl watching Law & Order SVU and a commercial comes on with Billy Mayes screaming at your about Mighty Mend.
Comment

dissdnt said:
I wish they had this for tv.

Nothing like cuddling with your girl watching Law & Order SVU and a commercial comes on with Billy Mayes screaming at your about Mighty Mend.
Click to expand...

Uhm, a lot of TVs have a feature to keep all audio normalized (the same level). TV commercials are made intentionally loud because the marketers realized people turned the volume down during commercials or left the room. Movie theatre ads do this too.
Comment

Most new vehicles have this with respect to in car sound systems - when you increase speed and the engine emits more noise the volume goes up. Interesting to see how they implement this in computers, though.
Comment
N

Wow, I think that drawing may depict Apple's touch(iPhone OS) based netbook.

Sure you might say that it is just a generic computer image, and don't read anything into it, but that is my gut feeling.
Comment

This is a STUPID ASS patent. This is the kind of crap that pisses me off about our current patent system. This has been done by others for DECADES. There is nothing new or novel about this and a new patent shouldn't be issued for it, even if it may not have been applied to laptops before...


dissdnt said:
I wish they had this for tv.

Nothing like cuddling with your girl watching Law & Order SVU and a commercial comes on with Billy Mayes screaming at your about Mighty Mend.
Click to expand...

They do have what you're asking about... many manufactures incorporate sound leveling into there sets under different trade names... that's different though, it's adjust the volume between programs/commercials, but again that's different than adjust for background/ambient noise.
Comment
T

Freaking pickup trucks and vans and all types of cars have it. It was annoying in the 90's, and it's annoying now. I hope there's on option to turn it off.
Comment

i can see a lot of missed calls coming from this.
Comment

This could be a very useful feature, IF it works.
Comment
R

Isn't a "sound sensing device" also known as a microphone? And don't they already use the mic to do feedback/noise cancellation?
Comment
A

Wow.. apple is being a bit of a patent troll here... I'm pretty sure cars have had this feature since the mid 90s. I don't really know what makes this patent so unique over technology that has existed for decades
Comment
K

Sayer said:
Uhm, a lot of TVs have a feature to keep all audio normalized (the same level). TV commercials are made intentionally loud because the marketers realized people turned the volume down during commercials or left the room. Movie theatre ads do this too.
Click to expand...

Think that is illegal in the UK now - all adverts must be at the same volume as the actual broadcast.
Comment

Yeah, many (mostly luxury?) cars do this, as many have already pointed out. This seems like something that can be implemented easily via software, however, since our microphones already appear to be perpetually on (or very instantly-on when needed). All one would need is an effective algorithm to transduce ambient noise input volumes to an automated volume increasing function ....
Comment
S

I think it may be useful, just give the user adjustability.

I too think the patenting frenzy is a little much. Acutally it blows my mind sometimes. Like others have mentioned, how can apple patent this when it has really been around since the 90's in gmc cars, trucks and vans? It seems as if they want to put a patent on EVERYTHING. I wonder what it will be like when I am grey-headed and I have grandchildren.
Comment
C

Sound like Apple is trying to patent the wheel. It's not like this is a new idea.

But perhaps there is a slight twist here that is new. Maybe they are applying psycho-acoustics and only listening to the environmental noise that users percieve to interfer ith the computer sounds or the learning thing sound new too. Other then that all they are doing is adjusting the volume to keep the signal to noise ratio constant. Not a new idea at all.

The good thing is that Apple could implement this in software as almost all Macs have built-in mics. They could drop this feature into mac OS X at any time without much effort
Comment

That would we great if you had your laptop in a big group. At school I wouldn't have to worry about music starting at full volume.

What would be even better is to have this on an iPod.
Comment

Kilamite said:
Think that is illegal in the UK now - all adverts must be at the same volume as the actual broadcast.
Click to expand...

Illegal perhaps but it is still in practise by many channels.

To be honest I would much rather see the ability to control system sounds and user sounds individually rather than auto adjusting volume.
Comment
E

Sure you might say that it is just a generic computer image, and don't read anything into it, but that is my gut feeling.
Click to expand...

It's just a generic computer image. Apple has NO reason to use pictures of prototype-hardware in patent-applications when some generic image will do.

You are a classic example of a Mac-user who reads way too much in to things.
Comment
B

Kilamite said:
Think that is illegal in the UK now - all adverts must be at the same volume as the actual broadcast.
Click to expand...

How would you enforce that? Make all broadcasters pay for even more equipment?

The commercials aren't too loud. They're as loud as the technology allows. Call it more full bodied if you wish. The simply use the full possible volume. Music CDs are the same way. A TV show is more dramatic and while the loudest thing in the entire show might be an explosion or a gunshot or something, the rest of the show has to be different levels for realism. In other words you might have someone whispering in one scene, and only using 20% of the possible voume. Then the next scene is someone yelling, and they need to be louder. Say 70% of the volume. Then you've got a huge explosion. That utilizes the full 100%.

Well, commercials are 30 seconds and stay at the 100% mark the entire time. There's not much point in them having whispering.

Apple's patent is based on adjusting volume based on ambient noise.

AFAIK cars adjust the volume based on the speed of the vehicle, not the environmental noise.
Comment
T

Gives you an idea of JUST HOW POINTLESS patents are these days. This "invention" has been around several decades....so Apple is going to vigriously enforce its patent rights, iirc from the latest analyst calls, yeah...sure they are like they don't have better things to spend time and money on.
Comment
M

What if your phone is in your pocket, bag, or in the bedroom when your in the shower. Surely the "sound sensor" (mic) can't help there. Maybe good if it just picks up really loud environments.
Comment

As some users have mentioned, this has been used in vehicles for at least a decade. Sounds interesting, however what if you are having a conversation with someone and the adaptive sounds increases the volume to a level where you end up muting the computer volume. Seems kinda counter-productive.

Might have some benefits, however overall it similar to the adaptive backlight and backlit keyboard on my MBP. I hard ever use it.