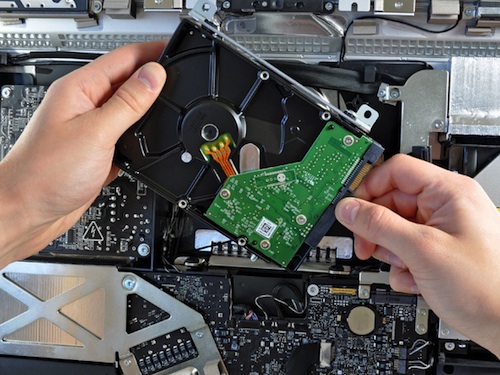 As noted by Other World Computing, Apple has implemented a new temperature sensor system on its latest iMac models that significantly hampers the ability of users to replace their original hard drives in the case of failure or a desire to upgrade. Without the custom 7-pin hard drive cable and proprietary firmware included on stock hard drives in the new machines, the new iMacs' fans spin to full speed and the machines fail to pass the Apple Hardware Test.

For the main 3.5" SATA hard drive bay in the new 2011 machines, Apple has altered the SATA power connector itself from a standard 4-pin power configuration to a 7-pin configuration. Hard drive temperature control is regulated by a combination of this cable and Apple proprietary firmware on the hard drive itself. From our testing, we've found that removing this drive from the system, or even from that bay itself, causes the machine's hard drive fans to spin at maximum speed and replacing the drive with any non-Apple original drive will result in the iMac failing the Apple Hardware Test (AHT).
Click to expand...

As the report notes, the change does mean that anyone seeking to replace the hard drive in a new iMac will have to go through Apple, limiting options and increasing costs.

It is not a matter of "if" but rather a matter of "when" your hard drive is going to fail. We preach this all the time in regards to having a proper backup strategy in place to prepare from when that failure happens. But it seems now, that when that happens to the main drive on your iMac, you're left with two options - buy a new drive from Apple and have them install it via one of their Authorized Service Centers, or enjoy the rather large Apple logoed paperweight on your desk. Want a 3.5" drive larger than 2TB? Too bad - Apple doesn't offer them.
Click to expand...

Apple has not officially supported do-it-yourself hard drive replacements on the iMac for many years, but many users have still elected to take on the task themselves or have others not specifically authorized by Apple perform the swap for them.

Honestly, I was very close to jumping on board with a new i7 - but this tanks my ambition. Even when someone invariably makes a workaround, I'm not sure about it.
Comment

That's some bull. Just an unnecessary Apple hurdle. Don't they realize this is the kind of thing that really pisses off with regards to their company?

Sometimes I appreciate the closed ecosystem/"walled garden" but I don't need to wear a helmet and straight-jacket in my private garden.
Comment
J

This is ridiculous. Temp is available via SMART data you need an extra cable connection.
Comment

This is the reason I switched on Windows 7. It's very hard to be a power user on Mac. Great OS, but the hurdles Apple makes you go through sometimes, are flat out annoying. 99% of the people using an iMac, however, would never know this is an issue.
Comment

I wonder how long til someone finds a workaround.
Comment

Time for an after market upgrade kit. This sounds like Apple was having thermal issues with the hard drives. With any luck, Apple will include some kind of firmware switch for people running SSD as SSDs should not have the thermal issues.
Comment

UGh! Seriously! I've updated the hard drives in every Mac I own just to extend the useful life of each of the machines. If I have to pay a Mac tax on adding hard drives now, Hacintosh may be next on the list instead of a shiny new i7 iMAC. That said I hope they reverse this horrible decision and don't decide to extend it to the laptop side of the business.
Comment
E

Although, I can say that opening an iMac is not something I wanted to do anyway.

I dislike this but I'll dislike it even MORE if this spreads to the Mac Pros and the laptops where I feel I have a better chance of actually being inside of.
Comment

You've got to be kidding me.

No, seriously, this is a joke or a misstatement, right? Apple makes dick moves every now and then, but this can't be for real. If so, well, looks like I'm never buying an iMac again (at least until this crap stops). Because **** all if I'm ever going to pay the Apple tax on crap like HDDs and RAM.
Last edited by a moderator: May 12, 2011
Comment

Although, I can say that opening an iMac is not something I wanted to do anyway.

I dislike this but I'll dislike it even MORE if this spreads to the Mac Pros and the laptops where I feel I have a better chance of actually being inside of.
Click to expand...

Are you kidding me? Apple are really testing their limits nowadays...
Comment
G

Build it and they will come...

Build it and they will come....

Get the smallest HD and swap in in half a year when aftermarket 2Tb HD will appear. Then sell the "old" 500Gb on e-bay and you'll still be better off money wise.
Comment
A

I think thermal is an excuse to create a very closed system, as just modifying the connectors for the hell of it is an excuse. I don't get it, they are huge, people love them, and then they slowly start a bait and switch system on us. Same ***** google did with android. Open platform everyone. Now that we have you all under contracts, guess what. No longer an open system.

Unbelievably lame! So glad I decided on a 2009 Mac Pro over a new iMac. I was torn, but my number 1 thing would have been to open it and install two hard drives.

Plus the 09 Mac Pro's can now be hacked for hex core chips! Good timing!

Where did the dislike button go (J/K love the new site)? -1 for me.
Comment
A

This is retarded, so they're forcing people to buy the apple SSD instead of buying the cheap hard drive, then purchasing their own SSD and installing it at half the cost. **** everything about this.

edit: by half-cost I mean, assuming people didn't want a 256gb ssd, maybe they wanted a 128gb or some other size. The point is they don't have options anymore, they either get whatever mechanical drive apple sticks in or the spent $500 on get to be surprised by whatever SSD apple sticks in there.
Comment
D

This confers that the next desktop Mac I buy will most likely be a MacPro. Hopefully not long before a 3ed party hack.
Comment
B

On an island in Maine

So Apple is in essence giving their computers a life span of 3-5 years... Major fail! Any tech person will tell you, it's not a matter of "if" a hard drive will fail, but a matter of "when." It's bad enough you have to go through the screen, all that metal tape and tiny non-standard screws to get at the hard drives on the new machines, now they are making them proprietary too? WTF. Apple should make the iMacs with swappable drive bays on the side like many manufacturers do with laptops. CPU, GPU, etc. don't need to be user replaceable, but RAM and Hard Drive absolutely do. Either that or they need to make a tower that costs less than a used car.
Comment

This is just totally unnecessary. I'd like to know one reason why this is a good thing for end users...

The previous sensor stuck to the drive worked and works just fine. I can kind of understand the batteries being none user serviceable on the laptop range, although i still dont agree with it. But this just takes the piss.

That stinks - especially since they don't offer a 500GB SSD option ... my plan was to get their cheapest harddrive option and replace it with a nice fast 500GB SSD - well, guess no new iMac for me (at least not until they give me a 500GB SSD option) ...
Comment
M