Apple appears to be ironing out a bug that meant some iOS 14.5 users were unable to adjust the "Allow Apps to Request to Track" setting that was rolled out as part of Apple's App Tracking Transparency (ATT) feature. 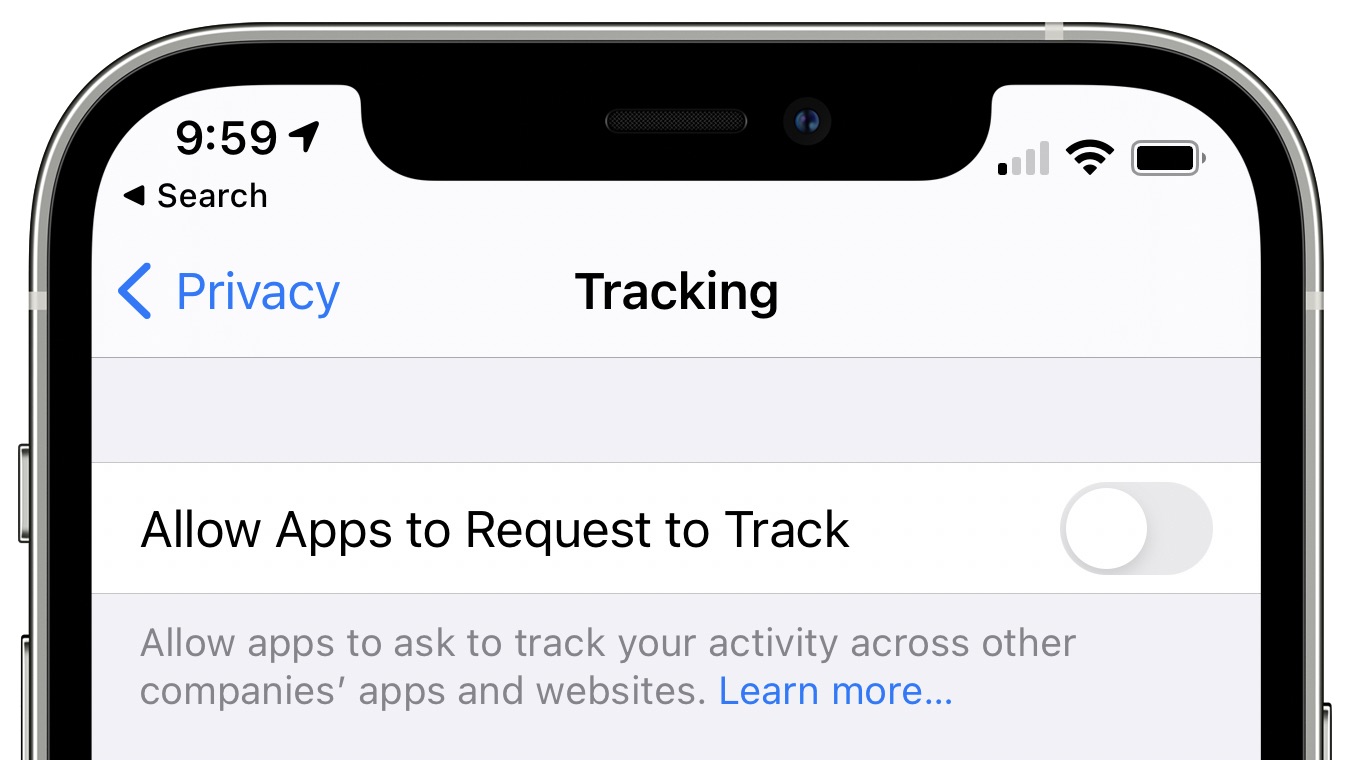 In iOS 14.5, iPadOS 14.5, and tvOS 14.5, ATT requires that apps ask for permission before tracking your activity across other companies' apps and websites for targeted advertising purposes.

On iPhone and iPad, users can manage tracking permissions on an app-by-app basis in the Settings app under Privacy -> Tracking, where a new "Allow Apps to Request to Track" switch resides. The setting is off by default.

On devices with the "Allow Apps to Request to Track" setting turned off, all apps that request to track are denied permission by default and cannot access the device's random advertising identifier, known as the IDFA.

Apps are also not permitted to track your activity using other information that identifies you or your device, such as your email address, although this policy is not enforced at a technical level.

Apple says there are a few circumstances where the setting may be legitimately grayed out, but a significant minority of users had still found that they were unable to adjust the setting despite meeting Apple's criteria for full access.

A May 3 update from Apple had been expected to fix the problem, but reports from users unable to control the feature persisted after the update was installed. Based on the latest reports from social media, however, Apple appears to be resolving the issue.

Shortly after ATT was launched, an early analysis suggested that 96% of iOS users did not plan to allow tracking for any app.

Apple recently shared a video with more details about its new App Tracking Transparency requirement for those interested in learning more.

ATT (App Tracking Transparency)...I wish it was named differently, I always read...AT&T
Reactions: decypher44, Cayden, jbachandouris and 4 others
A

Will it throttle my phone ?
Reactions: TiggrToo and EmotionalSnow
K

acorntoy said:
Will it throttle my phone ?
Click to expand...

i am surprised how few of my Apps seem to have used it before or maybe got rid of it? I only received it from Instagram and one other app so far. I assumed a service like Spotify or Outlook for instance would have tracked before.
Reactions: michaelnugent, amartinez1660 and MikeTheBohunk

Same here. I turned it on out of curiosity, and only 6 apps have requested to track me so far. Strangely enough though, one of them is a photo editor/collage maker — an app I would've never expected it from.
Reactions: michaelnugent and amartinez1660

contacos said:
i am surprised how few of my Apps seem to have used it before or maybe got rid of it? I only received it from Instagram and one other app so far. I assumed a service like Spotify or Outlook for instance would have tracked before.
Click to expand...

Many have updated their apps to not track.
Spotify probably does it anyway serverside.
G

Only took them six years to fix it!

It’s not a bug, it’s a feature. ?
Reactions: SFjohn and julesme
N

But how did people notice it's disabled? I never even thought to try turning it on.
Reactions: amartinez1660
A

nottorp said:
But how did people notice it's disabled? I never even thought to try turning it on.
Click to expand...

I got a serious question on this, and it has to do with how intricate technicalities legal terms have (as shown on tv at least): if I don’t “allow apps to request to track”, so the app never had the chance to display the prompt, can they just continued to track and get away with it since they never received “No” for an answer?
I ask also because this made a lot of noise but I have had this Limit Ad Tracking / Allow Apps To Ask option off for quite some time... and it is my understanding that apps have been tracking anyways.
M

Obviously, Facebook and Google got into the innards of iOS and altered the code such that ATT is "greyed out" disabled.

The above was irony.

I have always had this turned off -- even before 14.5 -- and I am still being tracked. I have tried uninstalling apps and reinstalling them etc.

My guess will be the free apps on iOS will begin charging for the apps due to lack of Ad tracking. ? Get ready to open up your wallets.

Seems to me the setting was locked correctly. No need to fix it.
Reactions: chemenski and SFjohn

Because it’s not a Trademark infringement issue.

TiggrToo said:
Because it’s not a Trademark infringement issue.
Click to expand...

I don't see why not. Customers could be easily confused. Apple sells phones, AT&T sells phones. Apple could be trading on AT&T's good name and loyalty of it's customers.
T

rpmurray said:
I don't see why not. Customers could be easily confused. Apple sells phones, AT&T sells phones. Apple could be trading on AT&T's good name and loyalty of it's customers.
Click to expand...

Because it’s just a three letter acronym. It’s not a commercial entity, it’s three letters that are used as a short hand version of App Tracking Transparency.
You must log in or register to reply here.
Share:
Facebook Twitter Reddit Email Share Link
Register on MacRumors! This sidebar will go away, and you'll see fewer ads.
Sign Up
Top Bottom