Apple today seeded the second beta of an upcoming watchOS 4.2.2 update to developers, one week after seeding the first beta and two weeks after releasing watchOS 4.2, an update that introduced support for Apple Pay Cash. 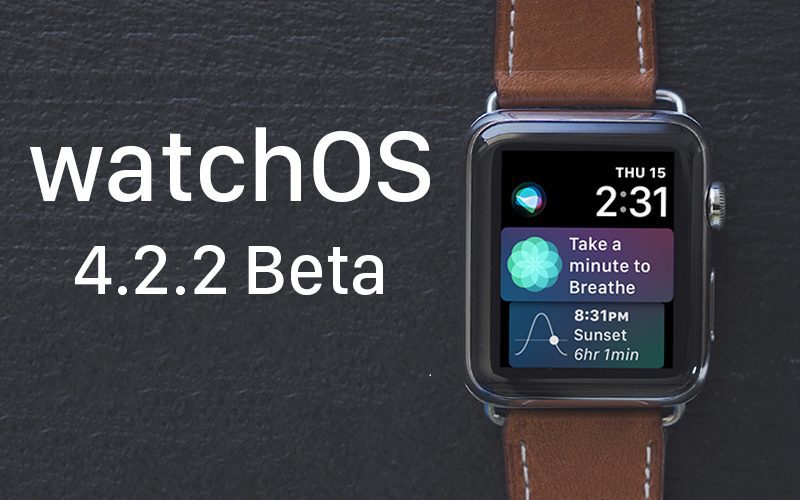 We don't yet know what features or improvements might be included in the watchOS 4.2.2 update, as no outward-facing changes were discovered in the first beta.

It's possible this update focuses mainly on bug fixes, and if that's the case, we won't know the extent of the changes until it sees a public release complete with release notes.

Should new features be discovered in the second watchOS 4.2.2 beta, we'll update this post.

I guess this is just more streamlining and fixing. Hopefully the next .x iteration will have more of the included apps working independently of the phone. My S3 LTE is still far too iPhone dependant.

edflo63085 said:
Apple needs to do something with the Apple Watch series 3 with the lte I’m a truck driver and my Apple Watch is always some what connected to the phone which sucks cause I love streaming music but it barely works cause it’s always connected they should do a 5ft ratio on the watch cause there’s no point of having lte
Click to expand...

What about the model without LTE? Also what about battery? iPhone should always connect where possible. LTE is a back up connection, not a first choice.
Reactions: Shirasaki
A

And why can't they let streaming audio go to the watch speaker?

I have AirPods. I just would like to listen on the watch speaker instead sometimes.
A

Aston441 said:
And why can't they let streaming audio go to the watch speaker?

I have AirPods. I just would like to listen on the watch speaker instead sometimes.
Click to expand...

Listen to music on the watch speaker? Are you serious? I certainly don’t want to do this. It’s a tiny speak that has terrible acoustics with zero base. No... just no!
Reactions: abrooks and Shirasaki
W

Anyone know if this fixes the silent mode not working on Watch Series 3 with 4.1? HomeKit commands are acknowledged loudly on my Watch S3 even with silent mode enabled.

Ad13 said:
What about the model without LTE? Also what about battery? iPhone should always connect where possible. LTE is a back up connection, not a first choice.
Click to expand...

edflo63085 said:
Look I’m always in the trailer n I don’t want to have my phone with me that’s why I bought the Apple Watch lte version but that’s feels more of a mistake cause it never working
Click to expand...

I don't totally understand what you're going on about, but maybe turning off Bluetooth on your phone would help? Then it won't be connected to the watch.. if that's what you want.