Registered developers can download the beta through the Apple Developer Center and once the appropriate profile is installed, betas will be available through the Software Update mechanism in System Preferences.

As with all new betas, Apple recommends not installing the new macOS update on a primary machine because it is early release software and could have bugs.

macOS Monterey introduces Universal Control, a feature that lets a single mouse, trackpad, and keyboard be used across multiple Mac or iPad devices, plus there's a new AirPlay to Mac feature.

Safari has been redesigned with a new tab bar (with a toggle for two different designs as of the third beta) and support for Tab Groups, and FaceTime has gained spatial audio, a Portrait Mode on M1 Macs, and Voice Isolation for cutting out background noise. There's also a new SharePlay FaceTime feature that lets Apple users watch TV, listen to music, and share their screens with one another.

Shared With You, a separate feature, keeps track of the music, links, podcasts, news, and photos that people are sent in Messages, highlighting it in the relevant apps. Notes has a new Quick Note feature for jotting down thoughts, and collaboration is easier with mentions and an Activity View.

The Shortcuts app from iOS is now available on the Mac, and Focus helps people stay on task by cutting out background distractions. There's an updated Maps app with a whole slew of new features, and with Live Text, Macs can now detect text in photos or provide details on animals, art, landmarks, plants, and more in images.

Mail Privacy Protection hides IP and prevents tracking through invisible pixels, and iCloud Private Relay keeps Safari browsing protected. There are many other new features in macOS Monterey, with a full rundown available in our macOS Monterey roundup.

Not showing up for me... 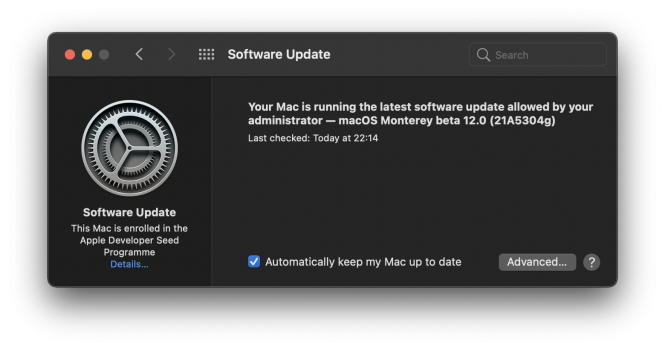 Not showing up, guess we have to wait a little longer. 3 weeks wasn't enough. Another hour or two is needed. Release Notes show really no fixes, mostly same known issues from beta 5 with some new known issues.

Ah... the joys of waiting for the update to appear. Fingers crossed we finally get Universal Control now.
Reactions: tshane and tmaxxtigger

While i appreciate all the work on the backend of the these releases making the OS(s) more stable, i must admit this years “updates” are the least exciting for me across the board. Makes me wonder if the real “innovation” will come once all their hardware has moved over the the apple silicon architecture and off of intel. I’m just missing the “WOW“ factor and apple products feel a little stagnan to me.
Reactions: michaelnugent, Jonas07, MuppetGate and 11 others

obamtl said:
Ah... the joys of waiting for the update to appear. Fingers crossed we finally get Universal Control now.
Click to expand...

I was thinking the same. Really don’t want this to be a 15.1 feature.
J

No mention of Universal Control in the beta 6 release notes.

and Universal Control is...?
Reactions: olad, SenorWhyMe, wwinter86 and 1 other person

No reference to Universal Control in the release note for new features. I guess the wait continues….
N

Originalblez said:
I was thinking the same. Really don’t want this to be a 15.1 feature.
Click to expand...

I would imagine if as in years past MacOS releases a few weeks after iOS, universal control will come with 15.1. Without Monterey it’s not useful anyway
Reactions: Originalblez
V

Downloading now... agreed it was a long week of 3 weeks...

Mitthrawnuruodo said:
Not showing up for me...

I think this is a permissions issue. I have the same problem. I had to give myself (the only user of the mac and admin) admin privileges to open some files after the last update.

dpdpdp said:
and Universal Control is...?
Click to expand...

Had endless Finder crashes on the current build (on an M1 Mac). Hoping they snagged the Finder-related bugs in the new beta.
Reactions: RandomDSdevel

Jason111001 said:
I think this is a permissions issue. I have the same problem. I had to give myself (the only user of the mac and admin) admin privileges to open some files after the last update.
Click to expand...

Nah! Probably just a bit of lag in the delivery system.

can't wait to install this on my iPad! ?
Reactions: RandomDSdevel, Shirasaki, obamtl and 1 other person