Apple Sending iOS 5 to iPhone Assemblers at End of September, No Sign of Redesigned iPhone 5

In a new report, analyst Ming-Chi Kuo reports that Apple is scheduled to send the golden master version of iOS 5 to its iPhone and iPod touch assembling partners during the timeframe of September 23rd through 30th, suggesting a launch for the new hardware around mid-October once the assemblers have had time to install the software on already-produced hardware and ship it out. The claims are in line with other reports suggesting that Apple will debut the next iPhone around the middle of next month. 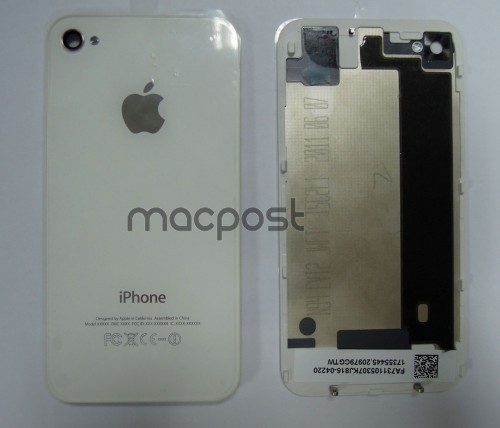 Back panel from prototype N94 iPhone​
Perhaps more interestingly, Kuo has seen no evidence of the rumored redesigned "iPhone 5" in the supply chain. Instead, his sources point to the "N94" iPhone that has been popularly referred to as the "iPhone 4S" as the sole new iPhone model set to ship, with Apple planning for 30 million units through the end of the year. Apple is also planning production of an additional 5 million units of the existing iPhone 4 and iPhone 3GS models as it transitions to the new model.

While many have been holding out for a significantly redesigned iPhone 5 offering a thinner, tapered profile as shown in third-party cases supposedly based on leaked design documents, essentially no evidence for such a model has surfaced in the form of parts leaks or other details. While some have suggested that the N94 is a decoy/scrapped/backup model and that Apple is keeping the redesigned model under tighter wraps, Kuo is not seeing signs of such a model anywhere in Apple's supply chain.

As for the N94 iPhone, Kuo also shares a few details on the device:

- 512 MB of RAM: This is to be expected, as the next iPhone should be using the same A5 chip found in the iPad 2, which does in fact offers 512 MB of RAM.
- Camera module height "almost same" as in iPhone 4: Camera thickness is the major limiting factor for overall device thickness, meaning that the next iPhone is not likely to be significantly thinner than the iPhone 4. Sony is said to have started shipping camera sensors to Apple's manufacturers back in July, with OmniVision coming online to assist in September or October.
- 3.5-inch display: A number of rumors have claimed that Apple will be using a larger display for the new iPhone, but Kuo's sources indicate the screen will be the same size as that found in the iPhone 4.
- Glass front and back: Although not 100% confident on this item, Kuo's sources suggest that Apple will continue to utilize the same basic design of the iPhone 4, with glass on both the front and back of the device.
- Manufacturing shares: Foxconn is scheduled to handle 85% of the production load for the new iPhone, with Pegatron taking the remaining 15%. As previously noted, Pegatron will be a bit slower to ramp up production, and will primarily be supplying Apple's Asia-Pacific markets.

As for the next-generation iPod touch, Kuo sees very few enhancements over the current fourth-generation models. The most visible change will be the addition of white models, with Apple said to be targeting production at a 60-40 split between black and white for both the iPhone and iPod touch. The iPod touch is said to be set to see a major redesign for the 2012 release.

Sorry, but it's already been CONFIRMED that this is false.

This is definitely believable though. I'm cool with an iPhone 4 with an LTE chip shoved into it alongside an A5.
T

If this rumor turns out to be true.
G

What about those pretty MR 3d renders? And that video on youtube? You know the one. lol
T

So what would be new for the iPhone 5? I don't believe this one..
A

How do they install?

How do they actually install the OS fast and efficient on millions of units?
D

I'd be both very surprised and disappointed if those were all the changes that were made.
A

Then frankly, I'm not buying it, if this is true. A slight speed bump and marginally thinner design is not going to make me spend 200 bucks. That just seems silly.

Regardless, I find it really hard to believe that all of those cases that were made for a redesigned iPhone with the tapered design were made for nothing. We've had what, 10 reports indicating that there is no redesign, and another 10 saying it will be a major redesign. How is this guy any different?

I'm thinking this is going to be for the "iPhone 4s" device.

asbeve said:
How do they actually install the OS fast and efficient on millions of units?
Click to expand...

Many many computers running iTunes. lol.

So basically same as iPhone 4 now with faster CPU and better camera, kind of what I expected, did not think they would redesign a whole new phone after just one year.

I am still in contract with my 4, so I am holing for some news on the touch front more than anything. I hope for a higher res screen for those wishing for that though!

It would be silly for apple to have a slow progression of advancements, with Android devices coming on so strong now. But it does feel like Apple isn't really after that crowd at this point anyway.

Mr. Pink said:
Sorry, but it's already been CONFIRMED that this is false.

This is definitely believable though. I'm cool with an iPhone 4 with an LTE chip shoved into it alongside an A5.
Click to expand...

Well, I, like everyone else on here, have been eagerly awaiting to see the "new" iPhone. However, I can pick up my iPhone 4 right now, look at it, and still feel mesmerized by it. It's truly beautiful. Sometimes you don't fix what's not broken. For all we know, they might be doing some big changes under the hood that are worthwhile to most. Time will tell, though. (I sure as hell hope it's more than just an increase of ram and megapixels.)
D

It's really starting to seem like we won't getting a big upgrade, which leaves me confused as to why they would wait so long to introduce it.

I know the is from an analyst and should be taken with a grain of salt but it's getting worrying that we can't seem to find any information that points to anything other then the N94 device.
V

I don't believe iOS 5 is the sole reason for extended delay of the next iPhone. After the leaks with the iPhone 4, it wouldn't surprise me that Apple is keeping much tighter wraps on the hardware this time around.

I'm expecting Apple to pull something out of the bag to wow us with, all over again.
M

There are gonna be A LOT of pissed off people (myself included), if the iPhone 5 isn't a significant revamp.

It's been seeming likely that the "iPhone 4S" will be the one and only next iPhone update.

Personally, I'm cool with that. I don't upgrade my phone every year so it'll be an awesome upgrade either way. This will be annoying to people who upgrade their phones once a year (or faster!)...

but hey, you probably can't satisfy anyone that flighty no matter what you do.

lame, this happens to "innovation" once u become the top leader and don't feel the need to compete. i guess i'll have to look elsewhere if this becomes true ...

i doubt it's iTunes. they probably have a special program to install the software onto the phone.

I hate the way competition copies Apple stuff but if it wasn't for them, maybe Apple will be still selling iPhone 1st gen (and making tons of profit).

mms13 said:
There are gonna be A LOT of pissed off people (myself included), if the iPhone 5 isn't a significant revamp.
Click to expand...

acfusion29 said:
i doubt it's iTunes. they probably have a special program to install the software onto the phone.
Click to expand...

The jailbreak community already found that the SHSH blobs (used for installation) saved on the devices in the factory are a lot different to standard ones. Common sense would lead anyone to assume that they have a special device for doing multiple iPhone at once anyway

There is no debating that the iPhone 4 is still selling really well. However, I don't believe that Apple would release a new iPhone 16 months after the 4 and have that iPhone be indistinguishable to the current model, to the eye anyway.

Perhaps the case designers rolled the dice on this and lost, but that strangely shaped iPhone icon in the latest Photo Stream betas looks way too similar to the designs we've seen floating around for months.

Plus ... this guy's an analyst. How often are they ever right?
Z