Following an extended effort over the past several years, Apple is set to open its first retail store in Istanbul, Turkey at beginning of 2014, reports The Wall Street Journal [Google Translate]. The store will reportedly span over 2000 square meters (over 20,000 square feet) and will be located in the heart of Istanbul's new multi-use Zorlu Center, between luxury retailers Burberry and Louis Vutton. 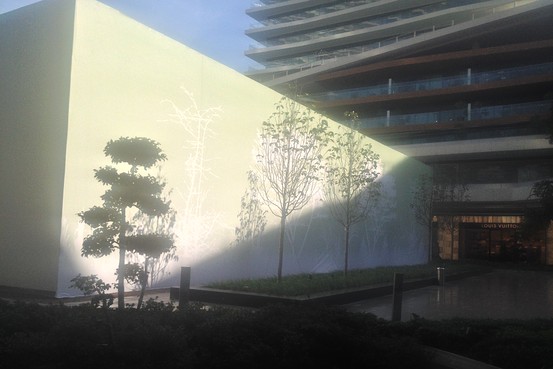 The store is currently under construction and surrounded by a barricade, but is reportedly set to feature a cubic glass ceiling, making it only the second store to boast the architectural feature. Previous photos have shown the store to be located underneath a central plaza at the shopping center, with the barricades perhaps enclosing a plaza-level entryway similar to that seen at Apple's iconic Fifth Avenue retail store located in New York City. The report also states that Apple is working on a total of four stores in the country, with the Zorlu store scheduled to be the first to open.

Apple has been preparing to launch retail stores in Turkey for some time, having listed initial job postings for stores in Brazil and Turkey last November. Turkish Prime Minister Recep Tayyip Erdo?an also visited Apple this past May as a part of the country's move to purchase 10.6 million tablets for its school children. Apple vice president for education John Couch also met with Turkish president Abdullah Gül in February to discuss a $4.5 billion iPad initiative.

This Mustafa been a long project.

procrastinasn said:
This Mustafa been a long project.
Click to expand...

"Joey, have you ever been in a... in a Turkish Apple Store?"

Hope this store saves us from the retail stores with absurd prices. I just want the European prices nothing more.
W

ardaburak said:
Hope this store saves us from the retail stores with absurd prices. I just want the European prices nothing more.
Click to expand...

Apple's pricing is absurd in every country, to be honest. It is all a matter of degrees.
S

That took them so long, but finally! Turkish people are absurdly keen on technology, that's proven with iPhone sales. They should be welcomed to Apple ecosystem ASAP, and tech retailers are doing nothing more than pumping the prices and ignoring the customer service

good news for Turkey , now they don't have to travel long distances to buy something.
Let's see how they price their products now.

MacRumors said:
…..The store will reportedly span over 2000 square meters (over 20,000 square feet) and will be located in the heart of Istanbul's new multi-use Zorlu Center…..