Apple today shared the first teaser trailer for its upcoming dark comedy show "Physical." The show stars Rose Byrne as a distressed housewife in 1980's San Diego, who gets swept up in the aerobics craze of the decade and has to contend with battling personal demons along her new journey.


"Physical" will launch on June 18 on Apple TV+. It was created by Annie Weisman, who has worked on shows like "About a Boy," "Suburgatory," "I Feel Bad," and "Desperate Housewives." The show is directed by "I, Tonya" director Craig Gillepsie, as well as Liza Johnson and Stephanie Laing.

Set in the idyllic but fragile beach paradise of sunny 1980s San Diego, "Physical" is a half-hour dark comedy following Sheila Rubin, a quietly tortured, seemingly dutiful housewife supporting her smart but controversial husband's bid for state assembly. But behind closed doors, Sheila has her own darkly funny take on life she rarely lets the world see. She's also battling a complex set of personal demons relating to her self-image... that is, until she finds release through the unlikeliest source: the world of aerobics.

At first hooked on the exercise itself, Sheila's real road to empowerment comes when she discovers a way to merge this newfound passion with the burgeoning technology of videotape to start a revolutionary business. The series tracks her epic journey from a stifled, overlooked enabler to a powerful, confident economic force, as Sheila transforms into someone we take for granted today (but was entirely radical at the time) -- the female lifestyle guru.
Click to expand...

Other upcoming Apple TV+ releases include "The Mosquito Coast" on April 30, "Mythic Quest" season two on May 7, "Trying" season two on May 14, "Lisey's Story" on June 4, and "Home Before Dark" season two on June 11. During last week's event, Apple also announced that the second season of "Ted Lasso" will debut July 23.

Sometimes I have a hard time deciding if Apple TV is competing with Netflix and Hulu, or Lifetime.
Reactions: Deuce2, CarpalMac, Razorpit and 7 others

GermanSuplex said:
Sometimes I have a hard time deciding if Apple TV is competing with Netflix and Hulu, or Lifetime.
Click to expand...

Not sure what to make of that one. Best part about the clip was it autoran into the season 2 trailer of Ted Lasso. That's always a pick me up right there.

This looks really promising although it does look awfully similar to Glow but that isn't exactly a bad thing! I'll definitely be checking this out.
Reactions: ErikGrim

80s aerobics classes are best the only workout you need because it’s also a pick up class so you get extra workout after.

The 80s were amazing! The 90s were the beginning of the decline of good music. It's becoming more rare.
Last edited by a moderator: Apr 27, 2021
Reactions: MacMediaNet, SFjohn, DeepIn2U and 7 others

Another swing and a miss for atv+.
Reactions: JosephAW, decypher44 and Demonknight

More 'For All Mankind' please.
Reactions: DeepIn2U and Big Alsie

Every time Apple TV shows off a new original show, I feel like they only produce shows that Tim Cook would watch or that he'd let his kids watch. The stuff they produce as originals just don't have the mass appeal I wish they did.
Reactions: Deuce2, entropys, qoop and 3 others
2

coolfactor said:
The 80s were amazing! The 90s were the beginning of the decline of good music. It's becoming more rare.
Click to expand...

you remember the 80s with rose colored glasses my friend.
Reactions: LloydChiro, ThunderSkunk, MacMediaNet and 4 others
M

Crushing the patriarchy with one copy of empowerment at a time!

Rose Byrne is a terrific, versatile actress. She can do comedy (Bridesmaids, Neighbors), horror (Insidious), and action (X-men). Very talented and doesn't get near as much praise as she should.
Reactions: LloydChiro, amartinez1660, ErikGrim and 2 others

2010mini said:
you remember the 80s with rose colored glasses my friend.
Click to expand...

I must have the same prescription because I have a hard time listening the the derivative homogenized soundalike pap that passes for today's music. A little while back there was a commercial on for a music "awards" show where they listed all the "artists" and I couldn't place any of them, they were all so generic and bland that they kind of blended together.
Reactions: amartinez1660, qoop and Razorpit

As someone wjo used Apple TV I would like to add that it is the most sh*t streaming service in history.
Reactions: ErikGrim and qoop
2

At first I was thinking “wow! The CGI on Selma Hayek looks great!”
Reactions: GrumpyMom
W

Turnpike said:
Every time Apple TV shows off a new original show, I feel like they only produce shows that Tim Cook would watch or that he'd let his kids watch. The stuff they produce as originals just don't have the mass appeal I wish they did.
Click to expand...

I think your imagination and all of these rumor sites are getting the better of you. He has no kids and you know nothing personally about the man.
M

"I, Tonya" was absolutely genius. Looking forward to this.
Reactions: ErikGrim and Big Alsie
C

Mrjetsondc said:
As someone wjo used Apple TV I would like to add that it is the most sh*t streaming service in history.
Click to expand...

Seems strange that you use it then to be honest. Why don’t you stop and use another?
Reactions: ErikGrim and Big Alsie

left out of the article:
"they done found this script buried in a container in landfill located in Burbank Ca under a TV series pilot titled:
"Cube Squared" about a rubix cube whom had to chose between 2 married nerds who are in the middle of a divorce at the townhall run by Tom Selleck look a-likes.
and another doosie:
"The Hacks of life" another scraped TV sitcom involving a 7-year old adorable orphan who offed his entire residential institution and is warmly welcomed to stay with a rich Park Avenue businessman and widower who owns the Ginzu knife company.

ArPe said:
80s aerobics classes are best the only workout you need because it’s also a pick up class so you get extra workout after.
Click to expand...

Jamie Lee Curtis ... BUT what we SHOULD be recalling is

Let's Get Physical by Olivia Newton John and Zanadu 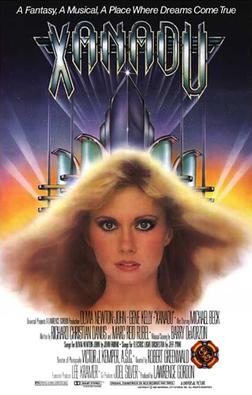 coolfactor said:
The 80s were amazing! The 90s were the beginning of the decline of good music. It's becoming more rare.
Click to expand...

Faded colours in movies.
Horrible movies like Zanadu, Saturday Night Fever (which was half a decade late, but hey Travolta made a career out of that).

Too many 1 hit music wonders. Sure lots of junk on stream today and shorter songs by 30 - 1.5mins and less effort for full albums because streams, collaborations, marketing products is what earns the money, being a musician now is just for the name and fame brand itself to start with.

Far too many knock off TV shows:
Base: 6 Million Dollar man (great)
knock off: Bionic Woman and that horrible 6 million dollar family TV movie special so disappointed.
Base: BSG (The OG seriers),
Knock Off: the 2 or 3 TV shows where the light cycles tried to copy CHIPS and Robotech Invid saga (flying cycles).
Base: Knight Rider
knock off 1: Automan
knock off 2: Airwolf (was ok half S1 and beginning pilot of S2)
knock off 3: Street Hawk.

junk: Go-Bots (for kids). Let's not forget the myriad of nutso cartoons: Bravestarr, Thundarr the Barbarian, Jace and the Wheeled Warriors, The Centurions, .. need I go on?


Movies:
Base: Superman (79 actually)
knock off: Supergirl (complete Junk)
there is a whole lot more but not enough space.


THE ONLY saving grace to the 80's was and always will be Miami Vice!
EVER great movie star in that show continued to prosperous careers in Hollywood because the show broke all the rules and extended what production, writing, filming SHOULD be.
You must log in or register to reply here.
Share:
Facebook Twitter Reddit Email Share Link
Register on MacRumors! This sidebar will go away, and you'll see fewer ads.
Sign Up
Top Bottom