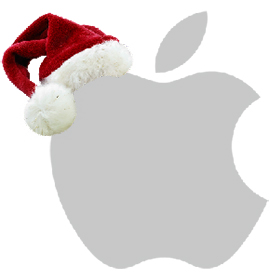 Apple today forecasted between $76 billion and $78 billion in revenue for the first quarter of the 2017 fiscal year, reflecting a three-month period between September and December, signaling the company's return to growth in the upcoming holiday shopping season.

Apple's lower-end guidance of $76 billion would be enough to eclipse the $75.9 billion in revenue it reported in the year-ago period, putting an end to the company's downturn after its first annual revenue decline since 2001 and three consecutive quarters of negative growth.

Apple's decline through the first nine months of 2016 was in line with the iPhone's first-ever drop in sales, while iPad and Mac sales also shrunk during the year. However, the strength of the iPhone 7 and iPhone 7 Plus, alongside Apple's growing services category, should help reverse that trend over the next three months. In the quarter just ended, Apple's revenue from services like the App Store, Apple Music, and iCloud grew 24% to an all-time record of $6.3 billion.

No contract pricing on phones it equals less sales for full price even in payment plans. Lately there has been a lot of offers for a free upgrade of devices which leds me to believe it might be the reason for the better sales of the iPhone 7.

I read somewhere else that smartwatch es are tanking as a market. Apple must be worried since I haven't heard about new bands like previous year.
Reactions: Benjamin Frost
Comment

I wonder if we will ever get to the point where Apple earning let's say 60 billion in revenue will not be seen as a negative.

That thought aside, sounds like they are expecting some good sales from the revised laptops and maybe even a planned surprise upgrade to one or all of their desktops?
Last edited: Oct 26, 2016
Reactions: JeffyTheQuik and rekhyt
Comment

Tim Cook: Couldn't have done it without you Sammy!
Reactions: needfx, rekhyt and Ciclismo
Comment

I don't think the word,"decline" would describe Apple at this time.
Comment

I can't stand investors and analysts. A company can't grow into perpetuity. They want year over year revenue and market growth forever. That isn't sustainable. I think $9 Billion is pretty incredible.
Reactions: CarlJ, tomwhom, enriquesh96 and 1 other person
Comment

I am not ready to see a santa hat. Where has the last year gone?
Reactions: Benjamin Frost
Comment

I can't stand investors and analysts. A company can't grow into perpetuity. They want year over year revenue and market growth forever. That isn't sustainable. I think $9 Billion is pretty incredible.
Click to expand...

Corporations are "people". You can't win them all.
Comment

I can't stand investors and analysts. A company can't grow into perpetuity. They want year over year revenue and market growth forever. That isn't sustainable. I think $9 Billion is pretty incredible.
Click to expand...

Of course, eternal growth of no company is sustainable in a finite world. However, investors don't care about such rules. They dump the company that can't sustain growth and move on to another company than can. There are plenty of other major tech companies to move on to. Both Amazon and Alphabet can sustain growth and now so can Microsoft and that's where the investors are going. The thing is, Tim Cook and Apple had been warned for a long time about depending upon only iPhone sales. Apple has had the means or the cash to get into other businesses. No one at Apple is willing to take any risk so they keep doing the same thing over and over.

Apple had as much of an opportunity or better to establish a powerful cloud computing business as any of the other major tech companies. Apple could have also purchased DuckDuckGo and tried to go head-to-head with Google's search/ad business and also build a knowledge engine for Siri. Why should Apple leave Alphabet a clear field when Alphabet is basically crippling Apple's iPhone business with Android and also offering competitive smartphones, too. Apple's management is just stupid or blind to allow a company to steal their lunch and then do nothing about stealing it back. AppleWatch is not even close to being a multi-billion dollar long-term cloud computing business. Everyone on Wall Street knew AppleWatch would quickly fail from the very beginning. It's growth has already stopped and is in decline.

Do I think I could run Apple better than it is being run? Absolutely not. I only see what other major tech companies are doing to keep growing their revenue. It just makes sense if a company has a means to grow then why not pursue it instead of simply coasting like Apple is doing. I realize Apple's mountain of cash is stuck overseas but it's possible Apple put too much emphasis on stock buybacks instead of acquisitions. This I'm saying in hindsight and I also have no idea of what Apple's end goals are. I'm just saying that when a company like Microsoft is more than managing its Windows sales slowdown and the complete collapse of its mobile business and yet Wall Street sees more prospects in Microsoft than Apple, then something is definitely wrong.

I do know that all the other major tech companies will be posting decent share gains on earnings and only Apple's share price will be declining. It's becoming a theme for Tim Cook and Apple. It's something shareholders are almost expecting every quarter and it's quite disappointing.
Reactions: Benjamin Frost
Comment

Constable Odo said:
It just makes sense if a company has a means to grow then why not pursue it instead of simply coasting like Apple is doing.
Click to expand...

This has been a theme for Apple for a long, long time. Somebody posted a link to the original iPod reveal thread the other day when the 15th Anniversary came around. There were so many comments echoing this sentiment - Apple should do this, Apple should do that. And here we are in 2016 and people still parrot it.


Constable Odo said:
Apple has had the means or the cash to get into other businesses. No one at Apple is willing to take any risk so they keep doing the same thing over and over.
Click to expand...

Off the top of my head in the last 4/5 years they've added:
Besides that's what's been shown. Tim Cook has mentioned the importance of AR/VR, there are rumours of car research, TV deals etc. it amazes me you think they're doing the same thing over and over. I'd take another look.

It's also one of the fun parts of following Apple, whilst most of the other tech companies preview in public, Apple usually just releases their consumer version out to the public (often with lots of rumours and internet hype). So, many people like yourself wrongly think they're "coasting" as we don't see anything official until the reveal.
Reactions: Uunnkknnoowwnn, Mac Fly (film) and newyorksole
Comment

I love how Apple slightly bet analysts predictions but shares still went down on the news. Just imagine if one of Apple's main products was exploding left right and centre. Even its replacements. MacRumors members for one would be calling for a public hanging of Tim Cook in Times Square. Grading on a hockey stick curve.
[doublepost=1477485032][/doublepost]

Constable Odo said:
The thing is, Tim Cook and Apple had been warned for a long time about depending upon only iPhone sales.
Click to expand...

You're right. If I were Apple I'd redesign their stores completely. I'd open source Swift. I'd do an entirely new file system and work on being the backbone of their entire cloud infrastructure. Furthermore I'd get into the smart watch and tablet markets and I'd invest heavily in further projects like a car even. And to top it off I'd make their own wearables like headphones and provide a streaming music service to compete with Spotify. But Apple would never dream of doing any of that.
Last edited: Oct 26, 2016
Comment
N

ghost187 said:
Tim Cook: Couldn't have done it without you Sammy!
Click to expand...

That many people have lost complete confidence in Samsung - and Android - that they would switch not only brand but also OS in favour of Apple? I wonder if the OS market share will show such trends.
Comment

Nefilim said:
That many people have lost complete confidence in Samsung - and Android - that they would switch not only brand but also OS in favour of Apple? I wonder if the OS market share will show such trends.
Click to expand...

Yes. I'd even go as far as saying Samsung killed the headphone jack. iPhone 7 was supposed to suffer for it and the Note 7 was the top rated phone of the year. Also, the Note series is the only phone that costs more than an iPhone, sells 10s of millions, and has no equivalent in the marketplace. I'd say this is about a 10 million swing for Apple for the holiday quarter which is why Tim Cook is forcasting return to growth.
Comment

Ok, so while the numbers are down, Apple expects better revenue for the Christmas season?

I am fairly surprised at how popular the iPhone 7 is - my loves her 7.

Hopefully the new Macs will help things turn around.

I don't see much changes in the iPad category, I think those numbers are going to keep going down
Comment

Apple will always remain vulnerable while they rely on one product to generate 60% of their sales and profits.

If they don't diversify into significant new markets then I don't see how they can continue to grow. There has to be a limit to how many iPhones they can sell every quarter. They might not necessarily continue to see sales decline but I don't see much opportunity for continued significant growth.

Of course they could always use that cash pile to buy growth companies in rapidly expanding markets. That would be the most obvious thing to do. They can't be getting much of a return on their cash assets given the low interest rates around the world.
Comment
You must log in or register to reply here.
Share:
Facebook Twitter Reddit Email Share Link
Register on MacRumors! This sidebar will go away, and you'll see fewer ads.
Sign Up
Top Bottom