Apple today updated its investor relations page to note that it will announce its earnings for the first fiscal quarter (fourth calendar quarter) of 2016 on Tuesday, January 26, 2016. The earnings release typically occurs just after 4:30 PM Eastern Time following the close of regular stock trading, and the conference call is scheduled to follow at 5:00 PM Eastern / 2:00 PM Pacific.

The earnings report will provide a look at iPhone 6s and iPhone 6s Plus sales through the holiday season, and it will give us a look at how well the iPad Pro is doing in its first quarter of availability. Apple's iPad sales have been down for several consecutive quarters, so it will be interesting to see if the iPad Pro boosted iPad sales. 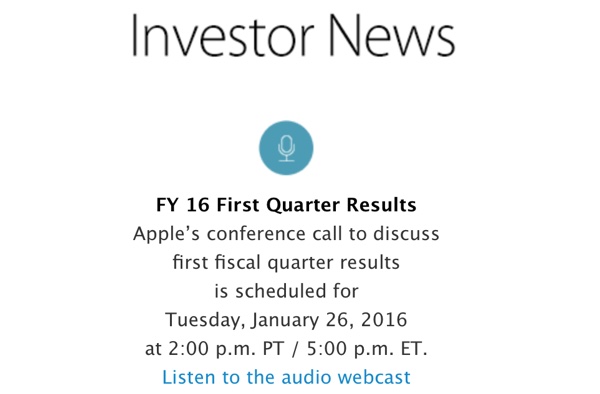 For the fourth fiscal quarter of 2015, Apple reported revenue of $51.5 billion and net quarterly profit of $11.1 billion, or $1.96 per diluted share. Apple sold 48 million iPhons, 9.9 million iPads, and 5.7 million Macs during the quarter. Apple's guidance for the first quarter of fiscal 2016 includes expected revenue of $75.5-77.5 billion and gross margin between 39 and 40 percent.

MacRumors will provide coverage of both the earnings report and conference call on January 26.

I think most of us can write the report in advance: another record sales quarter ... and their stocks will drop.
Reactions: miknos, DocMultimedia, _mdavenport and 1 other person
S

In before "Apple is doomed" posts
U

Let's hope Apple exceeds expectations this quarter. I wonder if they will announce Apple TV sales numbers? Investors are very curious about this investment. The stock certainly can use a boost.

If you are an investor in AAPL us the tried and true method in AAPL investing . Just sell two/three days before the announcement and then buy all of it in the day of announcement! You will make quick buck this way!
X