MacRumors has learned that Apple later this month will add the seventh-generation iPod nano to its list of Vintage and Obsolete products, officially marking the final iPod in the iconic nano lineup as "vintage." 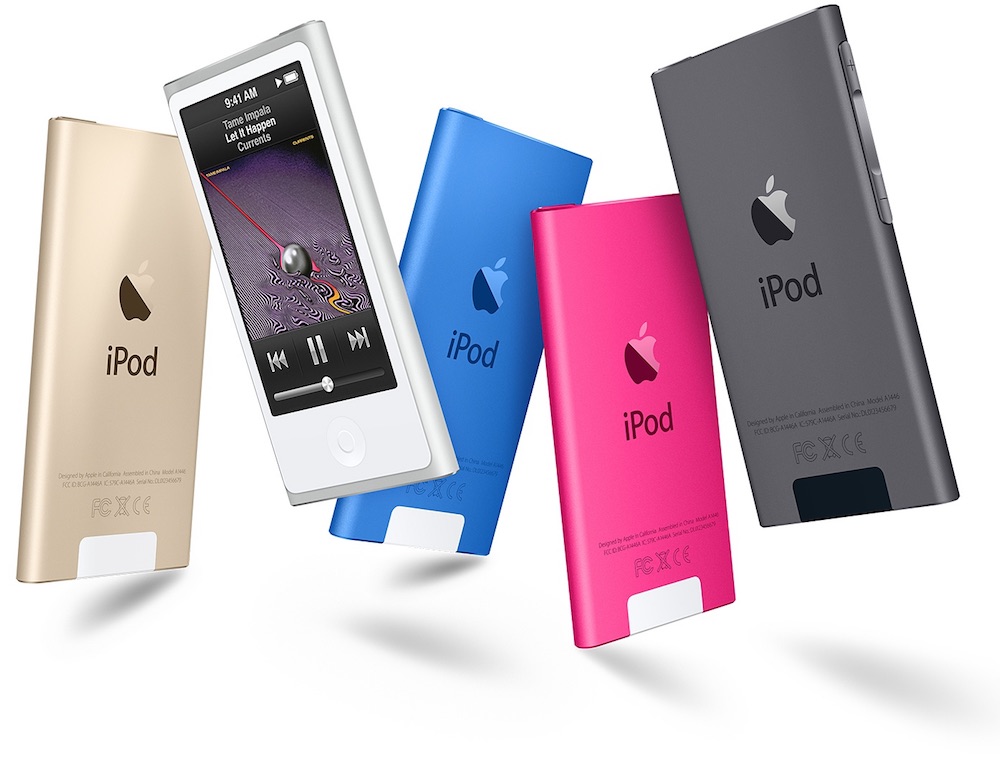 The vintage products list features devices that have not been sold for more than five and less than seven years ago. After products pass the seven year mark, they are considered obsolete. Apple debuted a refreshed version of the seventh-generation iPod nano in mid-2015, and that was the final iPod nano that came out. Now that the device is five years old, it is being added to the vintage list.

Apple launched the first iPod nano in September 2005, and over the course of the nano's lifetime, it got several redesigns. The first iPod nano model was similar in design to a standard iPod but with a slimmer, easier to pocket shape.

The second-generation version cut down on the size and introduced bright aluminum colors, but it offered a similar design as the first iPod nano model. 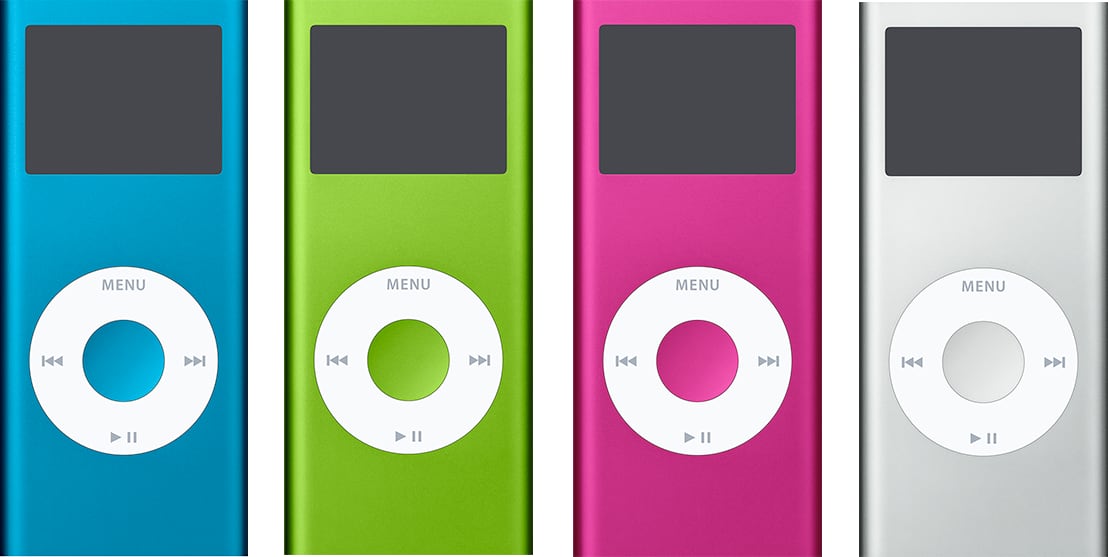 The third-generation iPod nano was popularly known as the "nano fatty" for its squat, wide design, and it was the first significant design iteration that Apple made to the nano lineup.

With the fourth-generation iPod nano, Apple again cut down on the size and abandoned the wide design from the third-generation models, and the fifth-generation looked largely the same.

Another major design change came with the 6th-generation iPod nano in 2010, with Apple doing away with the iconic click wheel in favor of an all-screen design that looked a lot like the Apple Watch does today. 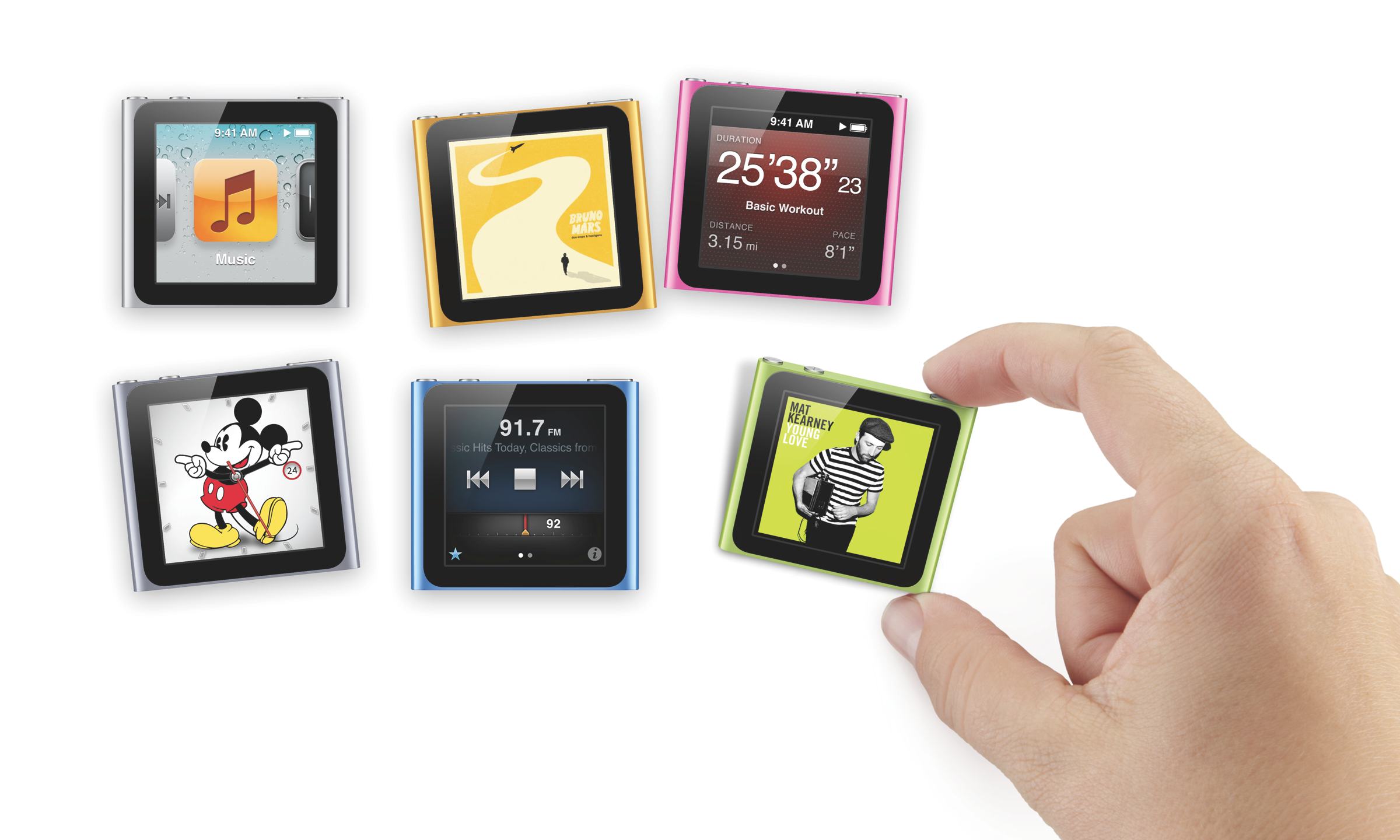 The seventh-generation iPod nano, which ended up being the final model that was introduced, came out in October 2012 with an iPod touch-style multi-touch display and a Home button, and the nano and touch product lines were ultimately so similar that Apple did away with the iPod nano.

Apple refreshed the seventh-generation iPod nano in 2015 to add new colors, but did not tweak the design, signaling the impending end of life for the device. The iPod nano was discontinued along with the iPod shuffle in mid-2017, leaving the iPod touch as the sole iPod that Apple sells.

While devices on the vintage list are able to receive hardware service from Apple and Apple service providers, it is subject to the availability of repair components and where required by law. Obsolete products have no hardware service available with no exceptions.

iPad Nano? That's a new one on me. Typo I think. iPod Nano?

What an incredible little music player. Still have my mint green Fat Nano laying around somewhere.
Reactions: jjhny, leftoverbacon, sracer and 8 others
M

7th gen always looked like something you would find at a chinese street market in a plastic wrap.
Reactions: jjhny, Internet Enzyme, Shirasaki and 13 others

I still don't understand why it was discontinued. Very useful portable player, and mine still works just fine.
Reactions: jjhny, wbeasley, Dj64Mk7 and 7 others

RIP, iPods were an era. Such a step up from portable CD players.
Reactions: kb923689, cwwilson, BulkSlash and 16 others

Yes, it was a typo. It's been addressed. Sorry about that.
Reactions: Stars&Stripes, ohmydays, Shirasaki and 1 other person

The iPhone 11 Pro Max is arguably the iPad Nano.

sideshowuniqueuser said:
I still don't understand why it was discontinued. Very useful portable player, and mine still works just fine.
Click to expand...

I loved my blue iPod Nano gen 2. I got it for good grades in school. I think it was the first Apple product that was truly only mine and I didn’t have to share it.
Reactions: thefourthpope, fonzy91 and TropN

But I have an iPhone as well. What minuscule part of the market is not buying a phone because they have an iPod???
Reactions: wyarp and tegranjeet

My first Apple purchase was a nano. Loved it. The click wheel was so satisfying to use.
Reactions: brgjoe, wyarp, fonzy91 and 2 others

I have a 3rd gen. I haven’t used it in years. I should see if it still works.

iPod Nano was my first Apple Product. While I've bought and sold many iPhones and iPads over the years I still have my iPod Nano.

sideshowuniqueuser said:
I still don't understand why it was discontinued. Very useful portable player, and mine still works just fine.
Click to expand...

Probably sales fell off. Remember how they sold the iPad 2 well into the iPad 4? People were still buying it so they kept selling it. And it just played music really. The iPod Touch is still popular because it can do most of what the phone can do without the making phone calls part so it's still popular with kids as something that goes easily in the pocket.

Also, I think it was a Steve Jobs sort of thing. There were a few products that saw updates in 2012 that he probably had a hand in the year before but then didn't see updates for years, *cough*MAC MINI*cough*...
I still believe he was the energy source for Apple's five years of insane yearly product updates and that no one at Apple probably got a full nights sleep from 2006 through 2011. Once Steve had passed, tho, things slowed down dramatically.
Reactions: wyarp, MartyvH, fonzy91 and 1 other person

sideshowuniqueuser said:
But I have an iPhone as well. What minuscule part of the market is not buying a phone because they have an iPod???
Click to expand...

I think it's more like people not buying an iPod because they have an iPhone. Most people always carry their phone with them so there isn't much of a reason to have a second device anymore.
Reactions: freedomlinux, Stars&Stripes and KeithBN

I wonder how many people actually use a iPod on a regular basis. I had a 20GB Classic from 2004 and quit using it once I got an iPhone.

Edited to correct the year I got the iPod.
Last edited: Sep 1, 2020
Reactions: KeithBN and E.Lizardo
M

What does this mean for MacOS support? Does that mean that at some point in time MacOS won't sync to them anymore? I have a bunch of iPod Touches and iPods that have a ton of music on them, and MacOS still will sync music to them.

Never thought about it until now. Maybe they won't make the ARM transition? That would be sad.
Reactions: mabhatter and orbital~debris

It would have a short period of sales to collectors but it wouldn't sell well. What would be the practical reason to buy an iPod classic in 2020 other than as a collector item?
Reactions: auxsend, KeithBN, Neodym and 7 others

mannyvel said:
What does this mean for MacOS support? Does that mean that at some point in time MacOS won't sync to them anymore? I have a bunch of iPod Touches and iPods that have a ton of music on them, and MacOS still will sync music to them.

Never thought about it until now. Maybe they won't make the ARM transition? That would be sad.
Click to expand...

Since you can still sync the original iPod I'm pretty sure they will still work. It means Apple won't provide tech or software support for them.
Reactions: KeithBN
You must log in or register to reply here.
Share:
Facebook Twitter Reddit Email Share Link
Register on MacRumors! This sidebar will go away, and you'll see fewer ads.
Sign Up
Top Bottom