Apple today began notifying developers about the upcoming closure of the old TestFlight beta testing service accessible through TestFlightApp.com, reports The Next Web. The impending February 26 shutdown of the standalone website arrives nearly one year after Apple's acquisition of TestFlight through its purchase of Burstly and subsequent integration of the service into iTunes Connect. 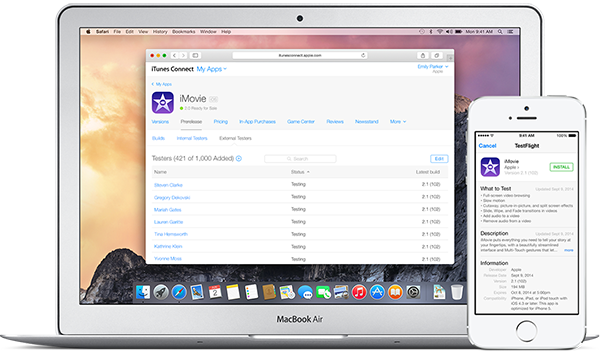 TestFlight on iTunes Connect and the legacy website were operated as independent services over the past year, enabling developers to test significant changes to their apps. Apple now encourages TestFlightApp users to export current testers so that they can be imported to the iTunes Connect version, and has posted a help document to help developers transition between the services. The new version of TestFlight is available for iOS 8 and later.

As the beta tester, I would like there to be a way to opt-out of betas that don't relate to the one I originally signed up for. There have been too many times where I've beta tested an app, and then later on the developer gives me a whole new thing to look at. I don't mind testing a version 2, 3, or 4 of something, but I don't like when developers to pretty much "spam" me with their other products with this service.

I would have liked if e-mails were sent to us about this too because of that. They could show us who we've signed up with, and give us the option to cancel.
S

Shame feature parity isn't there yet. I hope they add crash reporting soon as they said they would.
W

TestFlight is so much better a thing than Apple would ever have done on their own.
R

We used to use TestFlight until Apple bought it and removed Android support, thanks Apple!

reden said:
We used to use TestFlight until Apple bought it and removed Android support, thanks Apple!
Click to expand...

Yup. They should have added a WindowsPhone support as well. And BB OS 10, maybe even symbian and meego?

Don't get me wrong. I was using TF for iOS and Android testing of my apps as well. But it is only natural that apple discontinued Android support. After all, they bought the damn thing, so it figures they bought it for their products.

reden said:
We used to use TestFlight until Apple bought it and removed Android support, thanks Apple!
Click to expand...

Exactly!
After acquiring TestFlight in February 2014 and ceasing the Android testing, they want us now to transfer our projects to iTunes Connect. Oh, really?
This is the end of enterprise apps testing 'cos since now iTunes Connect allows you to test your app externally only after a Beta App Review. Will it pass the review? Certainly not.
There was a great article about this matter describing the main pros and cons.
A