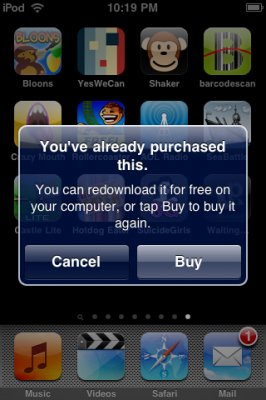 This is a distinct change from how things currently work. In the current version of the operating system, iPhones and iPod Touches may re-download applications both over-the-air and on their computer without charge.

While we first speculated that the reason behind the move is likely to prevent the illegal sharing of applications in the 3.0 firmware, further testing indicates that there is a size cutoff to the downloads. The feature may not be complete at this point, so we'll have to wait until the final release to see what the new rules become.
Article Link: Apple to Start Charging for Re-Downloading Apps Over-the-Air?

I think I speak for most/all when I say, "Sucks eggs, man."

I can see the issue and understand why Apple would do it, but unless they allow over-the-air syncing with iTunes, it's going to be a major pain to some.

Err, big deal. I don't think this will ever become an annoyance to me. If it prevents an illegal act, so be it. I've never had to re-download an app, anyway.

For the iPhone only, I hope. Why would they charge you if you have an iPod touch for OTA when it uses Wi-Fi and not the Cell Network? Complete BS IMO.

Prof. said:
For the iPhone only, I hope. Why would they charge you if you have an iPod touch for OTA when it uses Wi-Fi and not the Cell Network?
Click to expand...

In A House, Ontario, Canada

That won't be good when you are not near a computer. 2.x lets you download it for free if you have purchased it already. There is a reason why people may not go to 3.0

What if, say, you were to download an app that sucked big time and then deleted it. However, an update was issued and you wanted to try it out and decided to download it over the air. Normally, iTunes tells you that you've already downloaded this content and to press "OK" to download it again. Would this new implementation force someone to have to pay for it again when currently they are not required to do so?

Ehh, not that big a deal as long as there is a way to still download them for free again.

markojug said:
There is a reason why people may not go to 3.0
Click to expand...

I really doubt that. This affects virtually no one, and the general userbase wouldn't know/care.

Tallest Skil said:
I really doubt that. This affects virtually no one, and the general userbase wouldn't know/care.
Click to expand...

This is a little unfortunate. I've had to have my phone replaced at an Apple Store on several occasions and since I have MobileMe, everything but my apps sync over-the-air. It seems a little tedious to have to go back to my computer to reload apps I've purchased like JaaduVNC ($25), which is really nice for accessing my home computer while I'm out.

I guess it's not a problem for a majority of the free apps I use.

Oh wow! I didn't even notice it was an iPod touch. Dammit!

I understand why they would Apple would do this, but it is annoying. GRRR DRM...

I guess I will just never delete. I'll have a graveyard of junk.

This sucks...I agree that most people won't notice or care. But that doesn't make it ok...and since there's no other way to have local storage of an app in the event that a delete/redownload is necessary, this is exceptionally draconian.

(If that last bit didn't make sense: on, say, a windows mobile phone, if I uninstall a program and reinstall it, the actual application file resides on my device or on a storage card. I can hard reset my device and have everything back up in under 10 minutes. If I can't do that AND I can't rely on an OTA download to get everything back, that really sucks.)
L

i dont really like the idea but at the end it will be for the best. Making better choices on apps that i will delete the next day and actually having the apps i really want.

APPLE COME OUT WITH A WAY TO ORGANIZE THE APPS ON THE HOME SCREEN!!! IS BORING AND A PAIN IN THE A**.

Thank you.
Sorry the for the big letters.

I've always been annoyed by this. If I purchase something on my computer through iTunes but haven't synced my phone, or vice versa, I wish Apple would automatically update the other device, or allow me to manually update it. For example, numerous times I have had a song on my iTunes but been away from my computer and had to buy it a second time to play it on my phone without having to go home and sync my phone.

As far as syncing to only one computer, I see people at school (college) connecting their phones to the public computers all the time. I'm not sure, but I think they've figured out how to use it as a flash drive also (does anyone know how to do this? It would be great if Apple could build that into the OS 3.0 to allow us to use our iPhones to double as usb flash drives).

well, I can't say I like it, but at least you can still dl it for free from iTunes.

besides, personally, I have never re-downloaded an app before.

plinkoman said:
besides, personally, I have never re-downloaded an app before.
Click to expand...

i really wonder how many folks have had to. resync sure, but actually redownload. probably not that many. perhaps a few folks dumb enough to buy stuff direct to their iphone/touch and never back it up on a computer but hey, if you are that dumb you deserve to have to pay again.
F

i posted this a while ago an no one believed me.
B

I have in the past redownloaded apps OTA because I've heard about updates that made them suck less, and I'm currently away from my home computer. I've already paid for the app, why should I do so again?

As far as validating it, aren't applications tied to the account anyway? Why not only permit running applications that belong to the 'current' account? This way if User B downloads the app using User A's login info, he has to be logged in as User A in order to use that app, but has to switch back to User B if he wants to use any of his other ones. This gets annoying real fast; thus you deter people from trying to abuse the system while not screwing the people who are behaving.

fratboy said:
i posted this a while ago an no one believed me.
Click to expand...

Don't feel bad, it is a pretty unbelievable thing. It'd be nice to see one of the iPhone competitors exploit this. Charging you to save bandwidth? Come on, why bother getting a data plan.
S

So why let us log out of our account on the iPhone anyway? Who would even do that?

So we get a feature nobody wants for an inconvenience?
W

Tallest Skil said:
I really doubt that. This affects virtually no one, and the general userbase wouldn't know/care.
Click to expand...

Not sure if I can agree with that for 100% because I look at myself with my current devices and I often delete things just because they sucked initially, but later got better. My job requires that I'm driving or on planes literally 80% of the time so most of my downloading comes over the air and I depend on a lot of apps to get me through my personal and work day.

I'll agree that this probably affects a very small percentage of users, but it still affects people.

I don't know about you, but if I'm not using an app, I delete it. I don't need my phone cluttered with crap that I'm not using. But, just because that app sucks now doesn't mean it won't get better and I've reinstalled plenty that have made such a jump.

If this is true, though, means that it's just better to leave anything that you download on the phone despite whether or not it's currently being used in hopes that it gets better just for the sake of convenience.

And I doubt this has as much to do with DRM as it's probably a way for AT&T and Apple to help reduce network bandwidth and profit on it at the same time. Factor in how many downloaded apps there are and how many happen all the time and that's quite a bit of bandwidth. This is just a form of bandwidth control.
You must log in or register to reply here.
Share:
Facebook Twitter Reddit Email Link
Register on MacRumors! This sidebar will go away, and you'll see fewer ads.
Sign Up
Top Bottom