I am using an Apple tv 4k connected over HDMI with an LG C9 oled tv. The sound goes through
an optical cable from the tv to the speakers, KEF LSX. This works fine but to adjust the sound, I must
press +/- a lot and to find the right level is somehow difficult, as there is no visual sound volume bar in this scenario.
Another option that works very well and errases those 2 difficulties (sound is beter ajustable and there is
a visual volume bar on screen) is to stream the sound from the Apple tv to the KEY LSX speakers.
This works flawless with Netflix, Plex, ... but not with Youtube.
I tried erasing the Youtube app and after the reinstall it worked but then i left and switched the tv and Apple tv in sleep mode
and on return there is no sound while using the Youtube app. Closing the app end restarting it does not help.
All apps and software are up to date.

Has anyone the same experience or a clue what the cause might be?
Many thanks!
Reactions: tmc721
S

I can't get YouTube app to work through AirPlay 2 at all as well. There seems to only be a handful of apps that do work.
C 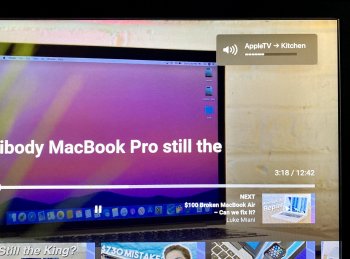 Performance of YouTube on the ATV AirPlaying to an AirPlay 2 speaker is usually completely unreliable. However after I reconnected a couple times as usual I was going to try to diagnose the issue a bit I could not get it to mess up again.

It seemed like it either revert to using system audio (directed through ATV) vs media audio (directed to wherever its pointed). Or since it seem to drop AirPlay coming out of an AD it could be something to do with the audio route temporarily disappearing causing it to route back to default.

YouTube uses their own player (AVPlayerLayer) likely to match their other 'YouTube for TV' apps on smart tv's, cable boxes, consoles, etc etc in form and function. Watching the processes of the ATV in console show TVAirPlay so its not like they dont have background audio enabled.

Apps that have the best AirPlay audio out performance are the apps that use Apples AV player. You can tell when its Apples player in an app because when you swipe down in a video you will see Info, Subtitle and Audio options right there in the player (AVPlayerViewController).

So I'm experiencing the same issue. I have an 4k Apple TV hooked up to my LG TV with the sound going to a Sonos beam. All my other apps on the Apple TV work fine. YouTube TV has no sound. Sometimes I can get it to work by going into the AppleTV settings, choosing another audio output and then switching back, but it doesn't work every time. Also, if I actually do get the audio to work, then turn off the tv, turn it back on, and again no sound from YouTube TV. Oddly, this setup has worked fine for months. This just started happening this week. I'm not sure what changed.

I found a workaround that makes it possible to have sound. Not ideal but it works.
You need to restart the Apple tv and then go to the sound settings (long press play/pauze on home screen) and select the airplay speakers.
The root of the problem lays in the Youtube app and it’s likely that Google will not solve this any time soon as it concerns Apple.
Second weird thing is why the Apple tv after a restart does not seem to remember the choice of airplay speakers, it always resets to hdmi.
E

I figured out a solution. Once your show is playing on the Apple TV and YouTube TV swipe down from the top right on your iPhone and you should see the show you’re watching in the top right tile. From there you can press the air play button and select whatever speakers you want.

Epstein99j said:
I figured out a solution. Once your show is playing on the Apple TV and YouTube TV swipe down from the top right on your iPhone and you should see the show you’re watching in the top right tile. From there you can press the air play button and select whatever speakers you want.
Click to expand...

that's interesting... i found that if I am firing the youtube app on my iPhone then do airplay to ATV, all good. I may try your solution then.... although it looks like you'll have to do it once for every video on youtube
N

this has been going on now for over a year. The audio works for a few seconda and then just turns off. What gives Google team?
You must log in or register to reply here.
Share:
Facebook Twitter Reddit Email Share Link
Register on MacRumors! This sidebar will go away, and you'll see fewer ads.
Sign Up
Top Bottom