As noted by The Next Web, Apple has launched its Apple TV set-top box in Brazil, offering users the ability to stream content from iCloud, iTunes, computers, and iOS devices. The addition comes alongside the roll-out of iTunes Store music and movie content in 16 Latin American countries including Brazil. Brazil is also the first country outside of the United States to see iTunes Match go live, allowing users the ability to access their music from iCloud. 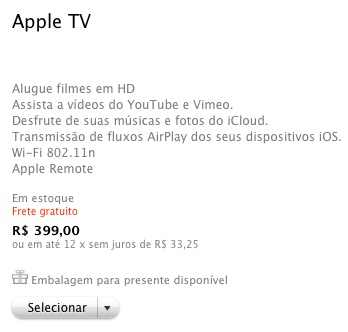 The Apple TV is priced at R$399, or the equivalent of $217 in the United States, highlighting the high prices due to import taxes. Those pricing issues are driving Apple and Foxconn to begin manufacturing iOS devices in the country in order to avoid import taxes.

As with many of Apple's products in its Brazilian online store, the company is also offering interest-free financing on the Apple TV, allowing customers to purchase the device in twelve monthly installments of R$33,25.

Us Brits complain at having to pay the equivalent of $154 for the Apple TV (including our high taxes) but we've got a bargain compared to the poor Brazilians.
Comment

yup. and apparently they work, since

I can not wait until the service is available in Argentina! Thanks Apple for remembering us!
P/D:
It is an honor to have a great country as our most important economic partner
Enjoy Brazil!
Comment

Kid A said:
yup. and apparently they work, since

is bringing mfg (& jobs) to brazil.
Click to expand...

It's interesting to see how more and more companies are building their factories in Brazil because of this.

The bad thing is that this only works on countries that have a very big population.

This method wouldn't work on a small country that's for sure.
Comment
A