Apple premiered its first TV show at the Tribeca TV Festival on Saturday. Dickinson is a period drama that centers on the life of 19th century American poet Emily Dickinson, played by pop star Hailee Steinfeld. 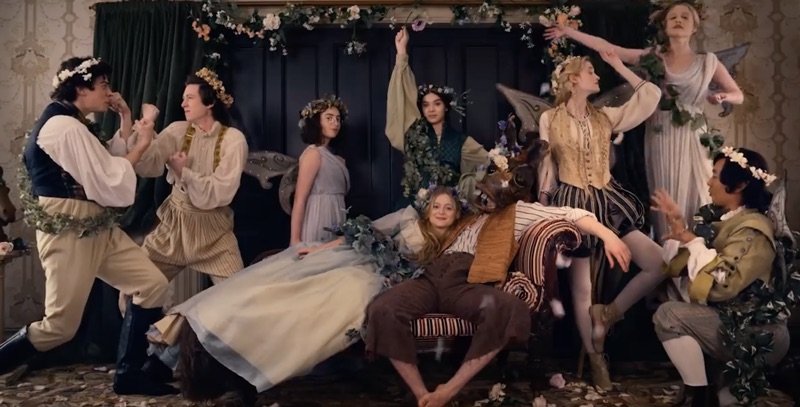 This is the first time the public has seen one of the shows set to appear on Apple TV+ when the streaming service launches on November 1. Deadline summed up the quirky take on Dickinson's life by comparing it to Baz Luhrmann's 1996 Shakespeare adaptation Romeo + Juliet.

The period-set look at the life of poet Emily Dickinson offers a wealth of contemporary flourishes. (Think Baz Luhrmann's Romeo + Juliet.) Rapper Wiz Khalifa plays Death and the soundtrack teems with currently charting artists like Billie Eilish. As pastoral 19th century life unfolds, bass-heavy beats drop and many characters speak in a modern style. The show, whose official world premiere will be held in a few weeks, blends drama, comedy and romance steeped in literary history. "It truly reflects everything that's in her poetry, which is everything there is to feel," Steinfeld said.
Click to expand...

In the first episode, Dickinson resists her mother's efforts to marry her off and is heartbroken when her father chastises her for submitting a poem to a literary magazine.

"I do think that the pressure that Emily Dickinson is under to feel or act or do certain things, I think that women still feel that today," Steinfeld told Reuters after the screening of the show's first episode.

Steinfeld, who played a breakout starring role in Pitch Perfect 2, also made the surprise-announcement that she will release her new music single "Afterlife" on September 19 and the song will feature in the show.

Other shows set to debut with the launch of Apple TV+ include The Morning Show with Jennifer Aniston and Reese Witherspoon, and See, a sci-fi drama featuring Jason Momoa.

Apple's video streaming service will cost $4.99 per month, and Apple is planning to provide one free year of Apple TV+ access to all customers who purchase an iPhone, iPad, iPod touch, Apple TV, or Mac, aka any device able to play the service's TV shows and movies.

Not sure if I’m really interested in this show. The others have more appeal to me. But this one looks cute at best. Maybe my low expectations will leave me pleasantly surprised.
Reactions: lunarworks, AreYouIn? and GrumpyMom
Comment

Naving Amazon Prime and Netflix I never ever watched any original content besides All Or Nothing. So Apple TV + would only appeal to me if a huge chunk of the iTunes movie library would be included.
Comment
T

Why would Apple involve itself in producing such trash? Apple should place itself above the content of a garbage society.
Comment

We need something other than "period drama" to refer to works like this, Romeo + Juliet, Hamilton, etc... Period Drama isn't really accurate.
Comment

thisisnotmyname said:
We need something other than "period drama" to refer to works like this, Romeo + Juliet, Hamilton, etc... Period Drama isn't really accurate.
Click to expand...

I would have preferred a non-modern twist retelling of Emily Dickinson's story. "Modern twist" is just a cute name for trash.
Comment

“Steinfeld, who played a breakout starring role in Pitch Perfect 2”

I was just going to post this too. Pretty sure her breakout starring role was True Grit...
Reactions: 15ngcs1
Comment
G