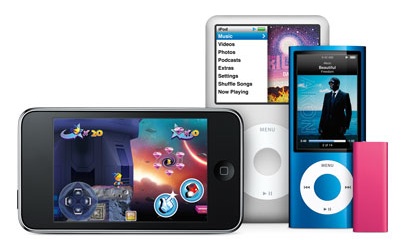 Apple announced new pricing and capacities for its iPod line of digital media players at today's "It's Only Rock and Roll" media event. Most notably, the new generation of the iPod nano line receives numerous upgrades, including a video camera and FM radio with live pausing and iTunes tagging capability.

The 32 GB and 64 GB iPod touch models are "50% faster" than previous models and will run OpenGL ES 2.0. iPod touch owners who already have the latest 3.0 firmware will also be able to download the new iPhone OS 3.1 firmware, which is available today, at no charge, while those running older firmware versions can upgrade for $4.95.

The iPod shuffle also receives a refresh today, including new pink, green and blue colors in addition to the original black and silver. A new polished stainless steel special edition model available only through Apple online and retail stores also joins the mix. The new iPod shuffle will be available in two capacities - 2 GB and 4 GB. The 2 GB model will be priced at $59 and the 4 GB model will be $79, while the stainless steel special edition will be priced at $99. Also, Apple is working with third-party headphone manufacturers to release new headphones that will be compatible with the iPod shuffle's feature set.

The iPod nano receives the most noticeable feature changes with the addition of a video camera, an FM radio, Voice Over, and the new Genius Mix feature. The iPod nano will also have a slightly larger screen at 2.2 inches within the same form factor as the previous model and with a polished anodized aluminum casing. To support video recording, a microphone and speaker are also added, as well a built-in pedometer. Available today at $149 for the 8 GB version and $179 for the 16 GB version, the iPod nano will also be available in nine different colors.

If only Microsoft had the foresight to add a camera to a Zune HD. Then it'd be an iPod Touch killer!

No video camera in the Touch? What they are thinking?
Nah, maybe it's because of those production problems reported few days ago? 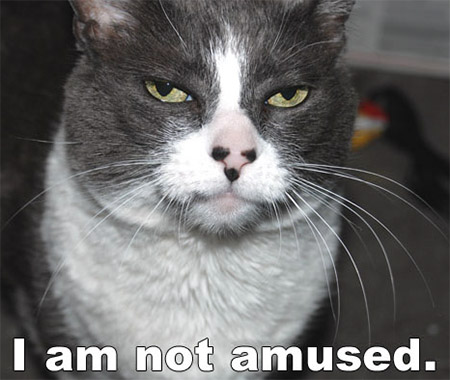 apple is going to the dogs

Barbie said:
apple is going to the dogs

Umm...seriously what were you expecting. It's an iPod event.
Comment


I'm surprised the Touch doesn't get the video! Still, an awesome update.
Comment

Witness the era of the iPhone. All devices converging into one.

Gotta admit, I am dissapointed in this, I've just ordered my new iPod nano, but I was going to get one anyway. But they surely couldve done better.

I think they've run out of ideas for the iPod line. Until they make them all touchscreen or holographic lol
Comment

The firmware being downloaded/installed on my first gen Touch is 3.1.1 - What's the difference I wonder?
Comment
S

Yeah i'm pretty disappointed, even though them shuffles are very cute.

If Apple are not carful there going to run into people calling them all sorts along the line of 'lacking innovation of late'.

To some people SL has been a stop gap, no real noticeable changes because they are all under the hood and now these iPods which lets face it, are nothing special.

A camera, thats inventive, who didn't see that one coming.
Comment

You are correct. I thought was weird when site I was on mentioned Schiller say or double capacity to 32 GB for $100 more. Was really quadruple 8-32 right?
Comment

The iPod Nano is a nice device. The rest of the announcement was a bit pointless.
Comment
N

HAHA! Poor iPod Touch users...wanted a camera and video...Good job, Apple! Some ppl will leave the iPhone if the new Touch had the same video/camera...plus its the same speed as the 3GS...I actually knew a few ppl who wanted to get rid of their 3GS and get a BB and buy a Touch on the side, if it had all the same features as a 3GS minus the phone feature.
Comment

Barbie said:
apple is going to the dogs

Um . . . Apple has had nothing but ideas for the last decade. Apple is really the only one that has had any ideas worth anything lately. And then everyone else lines up to copy.

iPods are slowly being eclipsed by iPhones. The phoneless mp3/mediaplayer is dying. We all need to accept that.
Comment
F

Apple made a big mistake. They should have not put a camera in the nano. If they was not going to put one in the touch.
Comment
S

macshill said:
If only Microsoft had the foresight to add a camera to a Zune HD. Then it'd be an iPod Touch killer!
Click to expand...

Yeah, sure. Putting anything on a Zune is like adding a string a pearls on a pig.
Comment

Apple could have had $300 from me today if the new iPod Touch had a built in camera with video. The iPod Touch update is lame.
Comment

*LTD* said:
Um . . . Apple has had nothing but ideas for the last decade. Apple is really the only one that has had any ideas worth anything lately. And then everyone else lines up to copy.
Click to expand...

Really? How so? I don't dispute Apple's innovation but they're far from the only ones.


SandynJosh said:
Yeah, sure. Putting anything on a Zune is like adding a string a pearls on a pig.
Click to expand...

Awesome! How did you find the new Zune HD? I'm assuming you've used it based on your comments.
Comment
M

So, I currently have a 4 year old 60 GB 5G ipod. I have been waiting to upgrade to a touch with the same capacity. I was also looking forward to the camera we all thought the touch was getting. Not that it was going to be a huge deal, but I would have liked a 3.2 MP camera with an easy to use interface with iTunes/iPhoto (my cell phone sure doesn't have that). So, my dilema is this: Do I hold onto my current ipod, or buy the 64 GB w/o the camera now? The touch has been out for a while...when are we going to see a major product change, like we did from the 5G ipod to the 1G touch? It looks like the nano only got a video camera, which I'm not particuarly interested in, so are we ever going to see a still camera on the touch? Thoughts?
Comment

September 9, 2009: Apple has officially run out of ideas for their iPods.