Apple Updates Workflow With Support for iPhone X and iOS 11

The new version of the app allows users to drag and drop files onto a workflow to run the workflow using that file, and it adds HEIF and HEVC support to the Convert Image and Encode Media actions, respectively. 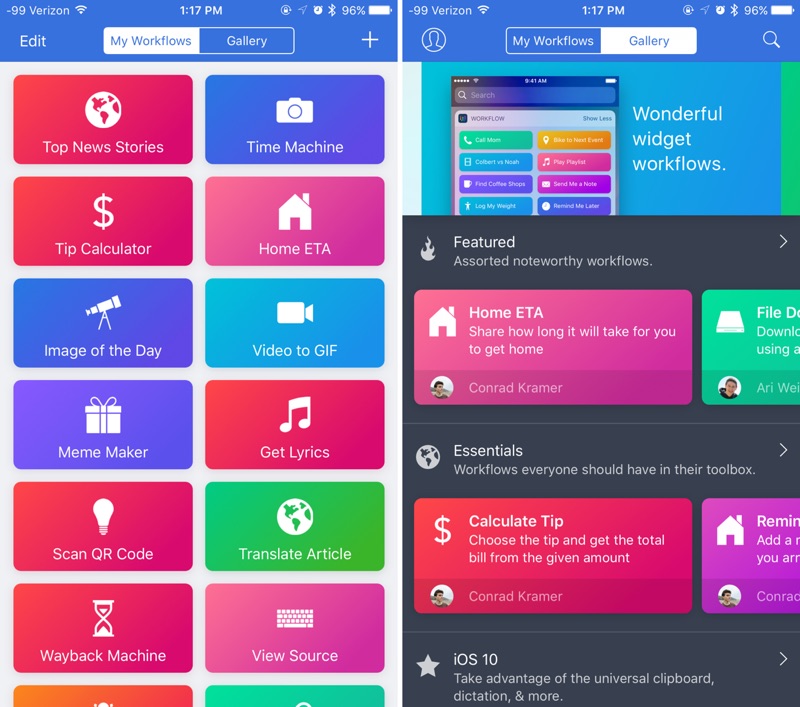 With the Get File and Save File actions, there's now support for retrieving and saving multiple files at one time, and there's also a new option to specify a default "From" address when using the Send Email action. Apple has also introduced a long list of bug fixes, listed below:

For those unfamiliar with Workflow, it's an automation tool that can essentially do anything. It allows users to create workflows to accomplish tasks like creating GIFs from a series of photos, pulling images from a web page, translating an article, posting photos to multiple social networks at once, calculating a tip, and more.

Since Apple acquired the app, it has been free to download. Regular improvements have been introduced, including bug fixes and new actions.

Workflow can be downloaded from the App Store for free. [Direct Link]

I completely missed Apple purchased this app. I may have to try it.
P

It's bizarre that Apple continues to update this app. Surely they bought Workflow in order to integrate the ideas into iOS directly, so maintaining this app seems like it would be a distraction to the team.

Oh wow. Drag and drop on the iPad with Workflow is going to be nice.
Reactions: Preclaro_tipo and Keane16
G

Can you please share or PM the link ... I tried downloading videos before but didn't work

gaanee said:
Can you please share or PM the link ... I tried downloading videos before but didn't work
Click to expand...

Found it here. More on it here. Make sure you first have Workflow installed. I’d grab it soon. Never know when Apple somehow kills it for violating Google’s TOS.
S

gaanee said:
Can you please share or PM the link ... I tried downloading videos before but didn't work
Click to expand...

Oh wow! I did not expect Apple would keep updating Workflow after they bought it. This is impressive.

The only item still really missing IMHO is an HTML5 based workflow editor which can be used from a desktop PC browser. Editing on an iPhone screen can be pretty frustrating at times just due to size constraints.

Would be great if we could convert the existing iCloud Photo Library to the new HEVC/HEIF formats to save some cloud space.
Reactions: Preclaro_tipo
P

laerning said:
Would be great if we could convert the existing iCloud Photo Library to the new HEVC/HEIF formats to save some cloud space.
Click to expand...

Does anyone know if this is technically possible?
[doublepost=1510325648][/doublepost]I invite everyone to post their favorite workflow. What do you use it for, I see capturing videos from YT, what else?