Apple Watch sales in the United States appear to have slowed down significantly in June based on new data that research firm Slice Intelligence shared with MarketWatch. Following a steep decline in the days after Apple Watch pre-orders commenced, which is to be expected of any product, daily U.S. sales remained relatively stable through May before experiencing a large drop-off last month as launch momentum begins to wane. 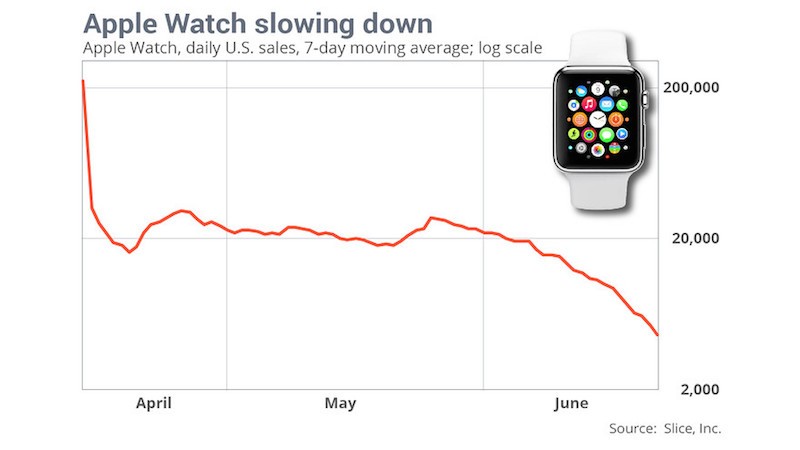 The report claims that Apple is now selling fewer than 20,000 watches per day in the United States, and fewer than 10,000 on certain days, while the logarithmic chart above indicates that sales dipped to as low as 4,000 to 5,000 units per day in late June. The data does not account for sales in Canada, Australia, United Kingdom or the twelve other countries where the Apple Watch is sold outside of the United States.

Slice Intelligence claims that two-thirds of Apple Watches sold to date have been the entry-level Sport model, far outselling the more expensive stainless steel Watch and 18-karat gold Edition models that start at $549 and $10,000 respectively. The research firm estimates that Apple has sold fewer than 2,000 luxury Apple Watch Edition models in the U.S. through June.

Slice Intelligence previously estimated 1 million Apple Watch pre-orders at launch, an average 30,000 Apple Watch sales per day in late May and an estimated 2.8 million total sales as of mid June. The research firm's sales estimates are based on e-receipt data from online shoppers in the United States that opted-in to have their inboxes tracked for email receipts.

Apple has not publicly disclosed any Apple Watch sales figures since the wrist-worn device launched in April, and will be grouping the device under its "Other Products" category, which combines sales of Apple Watch, iPod, Apple TV, Beats Electronics and accessories, in its quarterly fiscal reports. Apple's Q3 FY 2015 results are scheduled to be released on July 21 at 2:00 PM Pacific.

You don't say? Predicted with certainty at announcement, was told it was 'crazy talk'.
Reactions: AlphaTeam, DogHouseDub, Edsel and 46 others

Why am I not surprised that people do not want a device that needs a phone to work and connects via bluetooth?
Reactions: redscull, DogHouseDub, keithtae and 53 others

I just sold mine, I'm afraid. I received it on launch and just didn't find myself using it often. I'd wear it daily but rarely even used it. Unfortunately it didn't change my daily life like the iPhone or iPad did and it's just an extra accessory. I'm really hoping the 2nd generation one makes the leap the 2nd gen iPhones and iPads did.
Reactions: JackANSI, Dekema2, DBZmusicboy01 and 23 others

Interesting info, but useless without a comparison to launches of other tech products.
Reactions: purehektik, nodmonkey, Generik777 and 27 others

I would've never guessed this about a first generation product

Huge Huge Huge..... TV commercial presence when you couldn't actually get one.... Now that you can get them.... very little advertising..
Reactions: Apple Human, C7 POWER, DreaminDirector and 5 others

I was going to buy one.
Reactions: meaning-matters
H

First true new product category after SJ. Clearly it´s not Apple. Is it terrible? No. But it´s not iPhone/iPod/iPad class product.

They seem to lack focus again, unfortunately. Only time will tell how this plays out, but I´m seeing too much quality issues with software and lack of brilliance in new products. iPhone will dominate in many years to come, and Apple will as a result be as profitable as ever. But they have clearly lost something very very important and without it the long-term future might not be as bright as seen with this Apple Watch launch.
Reactions: V.K., redscull, RabbitLuvr and 39 others

Without at least 48 hours battery life, this is a non-starter for me.
Reactions: RabbitLuvr, panther quest, keithtae and 19 others

I think with this product, a second or third generation won't save it.
Reactions: redscull, keithtae, Shabach! and 12 others

i want to sell mine, with the heat outside and the wrist getting all disgusting from wearing a watch i decided to just leave it at home and i dont even miss it. should have bought a mac mini for streaming or something instead!
Reactions: keithtae, someone28624, Shabach! and 10 others

and of course thinner...

Then I consider one
Reactions: RabbitLuvr, keithtae, Lazy and 8 others
T

I really do like mine. I don't even try to show it off... A few people have asked me to show them what it can do.... Then they end up looking at me like I am crazy
Reactions: dav1dd, mwinget, SteveBlobs and 2 others
T

nikhsub1 said:
You don't say? Predicted with certainty at announcement, was told it was 'crazy talk'.
Click to expand...

Says the person with a signature insulting people that own the Apple Watch.
Reactions: InfoTime, mcdspncr, xerexes1 and 20 others

I use mine less after the first month. I thought it would be more useful. Recently, I had to wipe my phone and I had to lose all my workout info. No way to backup my workouts. Perhaps my bad experience is just unique to me but my feeling about the Apple watch matches the sales graph.
Reactions: keithtae, someone28624, studio¹³¹ and 6 others

Off to the semi-dead product category with you, Apple Watch. Go sit with iPod Touch and Apple TV.
Reactions: RabbitLuvr, keithtae, dav1dd and 10 others

Meister said:
Why am I not surprised that people do not want a device that needs a phone to work and connects via bluetooth?
Click to expand...

This a million times.
Reactions: panther quest, keithtae, imanidiot and 2 others

So 2.8m in US alone in 2 months, not counting the other countries?

Terrible numbers!
(for all the other players)
Reactions: panther quest, mcdspncr, xerexes1 and 5 others

Meister said:
Why am I not surprised that people do not want a device that needs a phone to work and connects via bluetooth?
Click to expand...

Exactly...
I really question whether this will go the way of the Apple TV where it sits along the wall at the Apple Store and every once in a while someone goes over and buys one.

It is not a revolutionary product. It's an expansion device to the iPhone, much like a BT earpiece.

Mark my words, the Apple Watch will evolve into some other type of wearable, like a touch sensitive projector on the back of your hand or forearm, like this: 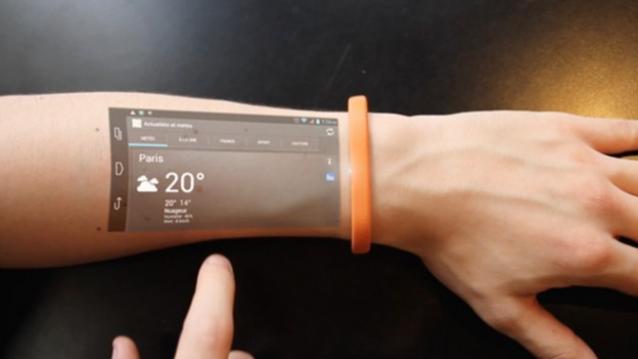