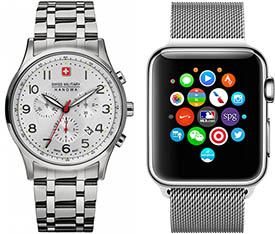 The latest data from Strategy Analytics reveals that the Apple Watch remained the most popular smartwatch through the fourth quarter of 2015, capturing 63 percent global market share based on an estimated 5.1 million sales in the three-month period.

Samsung trailed in second place with 16 percent market share and an estimated 1.3 million sales. Apple and Samsung together accounted for 8 in 10 of all smartwatches shipped worldwide during last year's holiday shopping season, based on the data.

Global smartwatch sales rose to an estimated 8.1 million units in the fourth quarter of 2015, an increase of 316 percent from 1.9 million in the year-ago quarter. The growth was led by North America, Western Europe, and Asia.

The record-breaking smartwatch growth contrasted the troubled Swiss watch market, which declined 4.8 percent in Q4 2015 over the year-ago quarter. Swiss watch sales totaled 7.9 million units in Q4 2015, down from 8.3 million in Q4 2014.

"The Swiss watch industry has been very slow to react to the development of smartwatches," said Neil Mawston, Executive Director at Strategy Analytics. "The Swiss watch industry has been sticking its head in the sand and hoping smartwatches will go away. Swiss brands, like Tag Heuer, accounted for a tiny 1 percent of all smartwatches shipped globally during Q4 2015, and they are long way behind Apple, Samsung and other leaders in the high-growth smartwatch category."
Click to expand...

Apple does not break out Apple Watch sales in its financial earnings results, but rather groups the wrist-worn device under its "Other Products" category with iPod, Apple TV, Beats, and accessories revenue.

Early rumors suggested an "Apple Watch 2" would launch this spring, but it now appears that Apple's much-rumored March 15 event will focus on smaller Watch updates, including new bands and perhaps another fashion partner like Hermès.

analog watch > smart watch all day for me.
Reactions: AleXXXa, MyMacintosh, mburkhard and 24 others
F

new bands for a slow watch...?
Reactions: AleXXXa, Benjamin Frost, jonnysods and 2 others

Only time will tell.
Reactions: Scepticalscribe, TropN, Simche and 11 others
T

Correlation does not imply causation. I have both smart watches and mechanical watches, they each have their use but my 60 year old Rolex still keeps 3 seconds a day.
Reactions: Scepticalscribe, mburkhard, ENduro and 3 others

I've counted 6 Watches yesterday night in a club in Italy, and I wasn't snooping wrists, it was mostly people checking notifications.

Satisfaction among my Watch-wearing friends is unbelievable. None of them is a nerd, just normal people.
Reactions: matrix07 and mguzzi
J

That Tag Heuer Connected presentation was hilarious! Most crazy thing I have seen in times!
W

People might purchase an Apple watch instead of a Swiss watch for now, but the Apple watch is essentially a disposable. After 2 years, the battery won't work, a new version will be released with new features, and the overall design will change as fashion trends usually do.

But after dabbling in the 'smart watch' arena, many (not all) people will go back to just wanting a classic timepiece that looks good with casual and formal attire, and isn't the same watch as a 16 year old high school student's.

There is room in the world for both of these types of products and they're not really in competition.
Reactions: Scepticalscribe, MaloCS, TropN and 17 others
J

This comparison seems a bit off. I mean, should Rolls Royce and Aston Martin be worried that their market share is small compared to BMW and Mercedes because they sold a lot of 5 Series and CLKs (who in turn should worry about Ford selling a lot of F-150s and Fiestas)?

I know that smartwatches (and apple in particular) are trying to position themselves as luxury purchases, but they're not the same market as Swiss watches.

People who want an analogue timepiece with a mechanical movement are always going to be out there. They might even also buy a smartwatch!
Reactions: Scepticalscribe, TropN, The-Real-Deal82 and 10 others

Deuce on the Clock

iPad did well at first as a niche product and we see where thats headed now............
Reactions: Lemon Mac and Col4bin

Deuce on the Clock said:
iPad did well at first as a niche product and we see where thats headed now............
Click to expand...

But I use my iPad Mini more than my full size one.

The link bracelet on my Apple Watch is more innovative than any of these luxury Swiss watches out there, and it's crazy that some of them charge over $10,000 for stainless steel watches. With solid effort from Apple, I can see YOY sales double for the next few years. Some of these companies need to wake up and take the Hermes approach before it's too late, because they can't compete in terms of software or tech hardware.
Reactions: HopefulHumanist, pianophile, StoneJack and 1 other person

Apples and oranges. A manufactured in China, robot assembled, Apple watch is nothing compared to a beautiful Swiss watch. I love my Tag's and would never wear a chintzy Apple watch to an event worthy of a Tag.
Reactions: Benjamin Frost, ENduro, Fancuku and 4 others
D

Not bad. But I don't see this becoming a major product category for Apple. No wonder they are working on a car. With iPad sales trailing off, watch sales being mediocre, and the AppleTV a very small part of their business, they desperately need another multibillion dollar product line in order to substantially grow.
Reactions: Benjamin Frost

ghost187 said:
The link bracelet on my Apple Watch is more innovative than any of these luxury Swiss watches out there, and it's crazy that some of them charge over $10,000 for stainless steel watches. With solid effort from Apple, I can see YOY sales double for the next few years. Some of these companies need to wake up and take the Hermes approach before it's too late, because they can't compete in terms of software or tech hardware.
Click to expand...

Any watch maker that is selling a SS watch for $10k doesn't have Apple (or any smart watch maker) on its radar, completely different market segment.
Reactions: Scepticalscribe, DynaFXD, ENduro and 4 others

Three issues with iWatch:
1) 1.2 days battery life needs massive improvement. 1 week minimum.
2) Display must be always on.
3) It is chunky. Needs to be THIN.

Apart from that, the iWatch is second to none.

Care to elaborate how?

Mechanical watches suck even at their only function: telling the time.

I'm a collector since 1993 (my first Rolex was a Pepsi Rolex GMT Master), but the Apple Watch is now on my wrist Every. Day. I'm actually enjoying it more and more (bought it on release, imported from Germany).

My Rolex (et al.) collection sleeps in a bank safe, and I'm going to actually start to sell it, as prices will tank.
Reactions: douglasf13, pianophile, Cinch and 2 others

jrath1 said:
I hid this uncomfortable hunk of metal up my ass two years. Then, after seven years, I was sent home to my family. Now, little man, I give the watch to you.
Click to expand...


Also I love how when Apple is in the lead, Samsung is "trailing" with the smaller marketshare. But in an article earlier today no such language is used for global smartphones. Just amusing. I don't care much other than to point out the amusement.
Reactions: Scepticalscribe, Benjamin Frost, ani4ani and 10 others

dogslobber said:
Three issues with iWatch:
1) 1.2 days battery life needs massive improvement. 1 week minimum.
2) Display must be always on.
3) It is chunky. Needs to be THIN
Click to expand...

1) battery life WILL improve as Apple moves to 14nm chips; however, not a single time in one year I felt having a 7 days battery life would change anything of the experience.

2) Hell no. I see (very rare) always-on Android watches and they look like those LED tshirts you wear in a disco in 1998. A double layer technology would be the solution (eInk + AMOLED)

3) it's actually SLIMMER than a square Tag Heuer Monaco, a very stilish, classic timepiece. Apple will not slim it further.
Reactions: filmantopia

IMO the Apple Watch is a toy, sure a nice one. I am looking into getting one to track swimming when a future version is waterproof.
That said I love my Omega Seamaster. It is a classic watch and I can use it at all times.
Like me, I think a lot of people will keep or buy analog timepieces. I don't think the Swiss will be worried. Same was said years ago when cheap digital watches came to the market.
They are just distinct markets. They for sure can coexist.
Last edited: Feb 18, 2016
Reactions: Scepticalscribe, Soccertess, Oblivious.Robot and 2 others