Apple Watch Series 3 With LTE to Launch in Denmark, Sweden, India, and Taiwan Next Month

Apple is launching the Apple Watch Series 3 with LTE in at least four more countries next month. The company plans to launch the cellular version of the smartwatch in Denmark, Sweden, India, and Taiwan on May 11, with pre-orders starting on May 4. 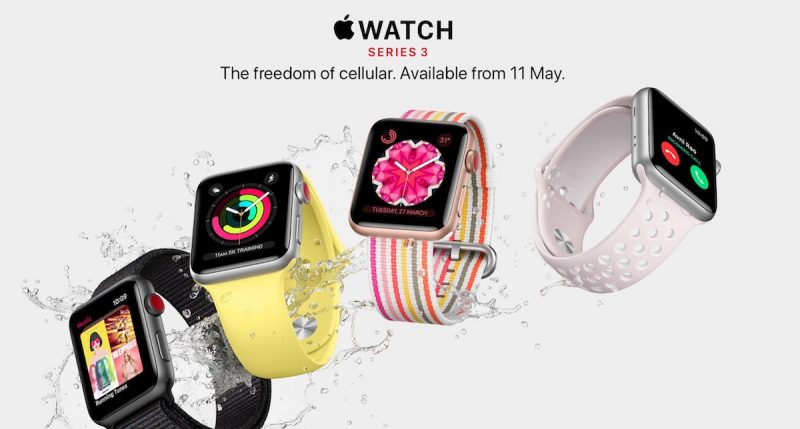 Network operator "3" is currently the sole cellular provider option at the point of sale on Apple's Danish and Swedish websites, while regional operators Reliance Jio and Airtel appear to have exclusive rights to sell Apple Watch LTE models and provide cellular connectivity for customers in India.

As part of its LTE deal, Jio is offering a new JioEverywhereConnect service, which allows customers to use the same Jio number on both their iPhone and Apple Watch at no extra cost. Airtel is also offering a special introductory cellular trial. Customers can pre-order from either company in-store or online from May 4.

(Thanks Jonas, Martin, and Handlaren!)

Here in U.K. only one carrier supports Apple Watch.
J

Of the four carriers in Sweden they pick the worst one.
K

Json81 said:
Of the four carriers in Sweden they pick the worst one.
Click to expand...

Haha, same in Denmark. We have 3 carriers and they also picked the worst one.

Didn't realize Apple was still launching AW3 LTEs. I mean in a few months it will, hopefully, be time for AW4 -- hopefully something "all new," not just another chip change or comic book watch face.

People on MR tell us how awful U.S. carriers are and wonderful their non-U.S. carriers are but then it's overseas carriers that put up resistance to things like LTE capable watches. Truth is all carriers worldwide are horrible quasi-monopolies offering more valleys than peaks.
Reactions: Black Tiger

Json81 said:
Of the four carriers in Sweden they pick the worst one.
Click to expand...

Sometimes they (Apple) can’t pick. I don’t know about all the major carriers in Sweden but I know for a fact that atleast one of them don’t support electronic simcards at the moment. I’ve been waiting for the LTE version but this is kind of bittersweet. Finally it arrives in Sweden but now I need to wait for m

But Denmark haven’t got Siri on Apple TV, which both Sweden and Norway has
M

Phew! Last year I imported an LTE version of Apple Watch to Sweden, thinking it can't be that long until carriers start supporting it. I'd almost given up hope. Also, fortunately according to apple website it seems it's not a new model released for these markets, but exactly the one I bought (Model A1891). Shame I'm on another carrier (Tele2).

Another news - Apple Watch Series 4 will be launched in the US on the same day!

Come down to us then, and spend some of all your oil money!

Aslevik, I feel your pain. Our neighbours (the UK) always get these new devices before us, too.

God damnit. Just settled in and thought it was okay waiting on Series 4 (even though my S2 is slow and I’ve completely given up on 3rd party apps and I would love altimeter and LTE for my runs - but yeah)

Aargh ... this is way too close to September launch

Kebabfar88 said:
Haha, same in Denmark. We have 3 carriers and they also picked the worst one.
Click to expand...

Well everything is in the eye of the beholder. 3 is my favourite company at the moment. Always first with stuff like this, visual voicemail, free roaming including data across much of the globe. Pretty great speed and coverage where I live and work. Can’t be anything but impressed
G

xDKP said:
Well everything is in the eye of the beholder. 3 is my favourite company at the moment. Always first with stuff like this, visual voicemail, free roaming including data across much of the globe. Pretty great speed and coverage where I live and work. Can’t be anything but impressed
Click to expand...

Agreed, I live 40 km north of Stockholm deep in the woods, and I use 3/Tre even as my main house internet connection with no problems, for streaming, gaming and so on. Excellent 4G coverage wherever I go. To be fair, their coverage map does get thin in the upper two thirds of the country, more so than the other providers, but the population density is really low there.

So maybe they are worse than the others, but I think for the majority they are good where it counts. Also, I think in Scandinavia we have it quite well in this regard anyway no matter the provider. Recently I was visiting family in Germany, and I was surprised at the poor reception with all available providers, and not just on the countryside, but even in bigger cities.
Reactions: xDKP

Lol, sorry! If it's any comfort to you, the only bank supporting applepay in Sweden is Nordea; the most hated bank in the nation (common theme here it seems... ) Thankfully I'm not a customer there, but it is annoying I can't get applepay on my devices!
You must log in or register to reply here.
Share:
Facebook Twitter Reddit Email Share Link
Register on MacRumors! This sidebar will go away, and you'll see fewer ads.
Sign Up
Top Bottom