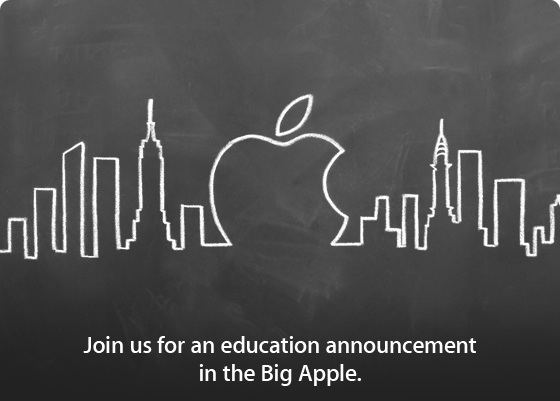 The Loop reports that Apple has sent out media invitations for an "education announcement" to be made at the Guggenheim Museum in New York City on Thursday, January 19.

Word of the event first surfaced last week, and sources have indicated that the announcement will relate to publishing, with digital textbooks perhaps playing a major role.

Update: The New York Times confirms that the event will focus on digital textbooks and that no new hardware will be introduced.

The event will showcase a new push by Apple into the digital textbook business, but will not feature any new devices, according to a person briefed on the event who did not want to be identified talking about it before it occurs.
Click to expand...

Kinda curious but not too much.

I'm curious as to what this pertains to. Maybe an iOS for education-centered event of some sort?

It seems un-Apple-ish to release products only centered on education, though.
M

almost makes me wish i was back in school. how cool would it have been to only need an iPad for school. all your books, note taking apps.

i can't be the only one but when i was taking notes i'd have to write so fast half the time i couldn't read them when i tried to study!!

How does that relate to education?

You understand the pun that was intended that potentially failed.

In any event, this could be cool. I suspect that it won't actually be as cool as I'd like it to be.

Something like:
- Every textbook currently in print is now on the iBookstore.
- iBooks available on Mac.
- Students buying an iPad will get an iBookstore gift card worth the cost of the iPad.
would be really cool.

I've used some Kindle eTextbooks, and... they're almost okay... except often text on diagrams isn't searchable, which is annoying is books with lots of graphics (IE, a CAD book.) Also, the apps for viewing them are sluggish.
S

Sounds pretty sweet
This almost confirms the text book rumours that have been circulating more and more recently, and I seem to remember (correct me if I'm wrong, haven't read that far yet!) that in Walter Isaacson's book Steve comments on textbooks for iPad...
Still in school, hopefully this will be awesome!
S

Ah, crap. I just sold my iPad 2 to get some extra money to buy a MacBookAir. I thought It would be better to have when I start College next month.. Oh well, I'll probably buy the iPad 3 when it comes out anyway...
K

rdowns said:
How does that relate to education?
Click to expand...

If it involves integrating digital textbooks with iCloud so that students can take notes in their iTextBooks on their iPads and have them waiting for them on their Macs in their dorms, then it would relate to education.
J

I have a hard time seeing the NY skyline without thinking of 9/11. Maybe not the best marketing move by Apple.

I would love it if my kids could carry all their textbooks on iPad. They are in grade school now, but once they move on to middle school and high school this sort of thing should be in full swing. This sure would have been cool to have when I was a kid -- back then we were rocking the Apple IIe in the computer labs until I got to high school and they got the budget to buy the Macintosh IIfx machines for the computer science lab.
B

>Free solar-powered iMacs for all the 3RD World's children

>iPads become textbooks and all school books need to be approved on the AppStore to be published -> Apple brainwashing from childhood, kids get brainwashed, apocalypse.

The re-birth of the eMac !

please! no iPad-based textbooks for kids. the glare is horrible and strains the eyes.

think of the kids for God's sake!
T

The return of the eMac!!!

kyjaotkb said:
The re-birth of the eMac !
Click to expand...

thenerdal said:
The return of the eMac!!!
Click to expand...

They probably struck some deals with some big educational publishers to bring Textbooks and Answer books to the iPad.
I hope they really leverage the ePub format and embed video as well in some of the demos.
I wonder if it will be K-12 or just University and College level.

If they also add some note taking enhancement with the ability to email or share notes and annotate them to the Textbooks that would be awesome.
A

acidfast7 said:
please! no iPad-based textbooks for kids. the glare is horrible and strains the eyes.

think of the kids for God's sake!
Click to expand...

Plus the only thing that keeps the overly inflated textbook costs down is selling your old ones on ebay. (Which you obviously cannot do with ebooks)

I can see it now, buy an iPad download all your textbooks and no more lugging around a Laptop and books, and makes perfect sense to me, however the need for a Laptop of some sort may still be needed for writing and research, but ditch the physical books aready.
J

acidfast7 said:
please! no iPad-based textbooks for kids. the glare is horrible and strains the eyes.

think of the kids for God's sake!
Click to expand...

I never carried all my textbooks in middle school. Only once when I took them home and back to school. My school had us keep them at home and they had school copies that stayed in school.