As noted by German sites Flo's Weblog [Google translation] and iFun.de [Google translation], a curious new iOS application that seems to be from Apple has appeared in the App Store. The new app, known as GameStore [App Store], debuted on December 31st and seems to be a test app of some sort, offering several racing-themed in-app purchases but without any actual functionality. 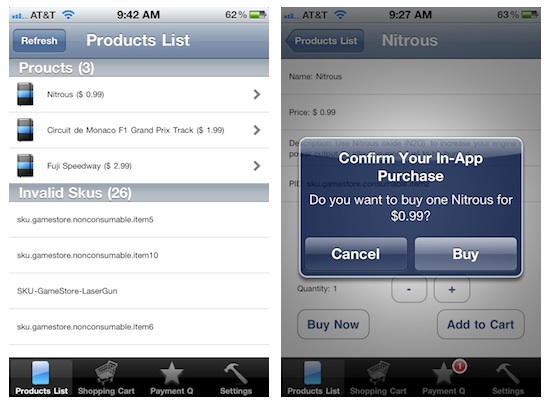 GameStore product listings and in-app purchase confirmation for "Nitrous"​
The app is priced at $0.99, with the three in-app purchases currently available through the app priced between $0.99 and $2.99. Additional in-app purchases shown in the single screenshot shown on the App Store page for GameStore show items as high as $26.99, but these other items are not currently visible in the app itself.

In-app purchases made through the app do go through and users' accounts are charged for them, but with no actual game supporting the content available, they have no functionality. 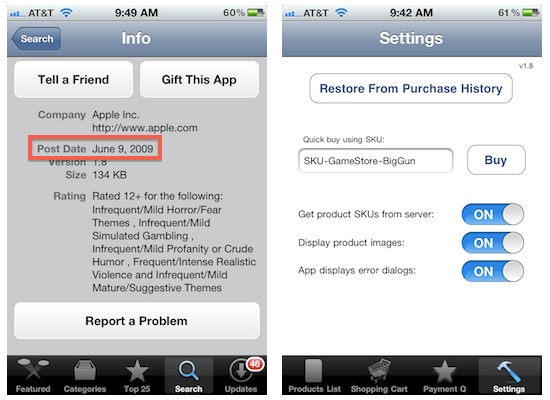 App Store page for GameStore app and Settings pane from within app​
When the app's listing is viewed in the App Store from an iOS device, the posting date is listed as June 9, 2009, which was during Apple's annual Worldwide Developers Conference just ahead of the public launch of iPhone OS 3.0 and the debut of in-app purchasing. Consequently, GameStore may simply be an internal testing app for the feature that was somehow accidentally published to the public App Store over the weekend.

Update: GameStore has now been removed from the App Store.

Update 2: TUAW's Erica Sadun took a closer look at the app from a developer's perspective, concluding that the app was likely sample code for an in-app purchasing developer test that somehow mistakenly got approved by Apple.

What developers do is upload a working skeleton application to iTunes Connect. You do this with the full understanding that you'll be replacing or, for tutorials, rejecting your binary at some point in the future. Once uploaded, you can test your IAPs, and make sure all your purchasing processes work. Looks like the app was submitted in order to provide a live testbed and may have gotten approved inadvertently.

After consulting with the TUAW team, our take on this is "likely sample code accidentally deployed to App Store" by Apple and then quickly pulled once people took notice. TUAW reached out directly to the developer we suspect was behind the app upload before it got pulled.
Click to expand...

Someone with a jailbroken iPhone extracting information in the data files from this in 3... 2...
Comment

Maybe Apple had planned to have a seperate game store, but decided against it.
Comment
T

App doesn't have a high resolution icon - maybe it was something that was abandoned or integrated with something else.
Comment

T'hain Esh Kelch said:
Maybe Apple had planned to have a seperate game store, but decided against it.
Click to expand...

Nope, looks more like a In-App Purchase (StoreKit) example application. Probably something that was made for the developer documentation.

I love screenshots of Apps under development. I mean, where else will you find a stock round rect button that says "Buy Now"?
Comment
N

I wish Apple would make a separate iOS games store. I'd like to see some real (productive, informational, social) apps on the Top 25, rather than just a list of games the kiddies like.
Comment

I agree, not that it bothers me the way it is, but it does make sense as ios is competing with the likes of Sony and Nintendo.
Comment
N

its still listed in the app store as of 10:54am EST
Comment
J

the battery in that iPhone needs to be replaced!
although, it's probably one of those "faulty iPhone 4S"s ...
Comment

Thijs Moonen said:
I heard you like apps so I put an app store in your app store so you can buy an app to buy apps
Click to expand...

Could someone explain why anyone would want to buy this app? Don't get why i care?
Comment
Z

It looks like the app has been pulled, I already downloaded it lol so we shall see what happens =)
Comment

Sure, it's a cool little application, but I'll just be over here having a chuckle at everyone who spent a dollar on this.
Comment

I wonder how much $$ Apple just made on this thing lol.
Comment

thijs moonen said:
i heard you like apps so i put an app store in your app store so you can buy an app to buy apps
Click to expand...

That app's UI is of very poor quality. Definitely not up to Apple's standards.
Comment
F

Nielsenius said:
I wish Apple would make a separate iOS games store. I'd like to see some real (productive, informational, social) apps on the Top 25, rather than just a list of games the kiddies like.
Click to expand...

You can use the app store categories (although, an option to opt-out of categories might be nice, so you don't have to go through 10 useful categories).
Comment

coolfactor said:
That app's UI is of very poor quality. Definitely not up to Apple's standards.
Click to expand...

Apple probably has dozens, if not hundreds of apps that look like this one. The point is that this is an internal testing app, not one meant for public consumption.

Pretty much every single industry on the place has different standards of presentation based on whether or not it's an internal-only matter or if it's a customer-facing item.

You can't really judge whether or not this app is up to Apple's standards since we don't know what their internal code standards are.

Theoretically, an app like this should be simple and perform the task for which it was designed. It is was meant to debug in-app purchases, order flow, etc. it is probably sufficiently effective for what it was meant to do. To polish it up would be a dreadful waste of Apple's resources.
Comment
R

coolfactor said:
That app's UI is of very poor quality. Definitely not up to Apple's standards.
Click to expand...