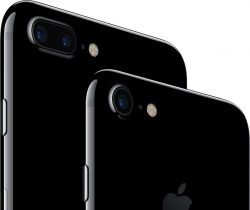 Apple's iPhone 7 Plus was the second best-selling smartphone in China last year and outperformed iPhone 7 sales by some margin, according to new market research, suggesting price is not the only concern amongst Chinese consumers.

Low-cost smartphones have dominated the Chinese market in recent years, while high-end devices from companies like Apple typically see low sales numbers in the country. But a report from Counterpoint Research reveals Apple's 5.5-inch device reached second place with a 2.8 percent market share overall, while Oppo's similarly sized R9S ended 2017 as the market leader with a 3 percent share. In third and fourth place the Vivo X9 and Oppo A57 took 2.7 percent and 2.6 percent of the market, respectively, while Apple's 4.7-inch iPhone 7 sat in fifth with 2.4 percent, suggesting the smaller form factor display dampened interest amongst consumers.

Apple was the only foreign brand in China's 2017 market top 10, according to the research, thanks to the success of its iPhone 7 series. An uptick in sales in the second half of the year was reportedly due to the implementation of price cuts, which increased Apple's competitiveness against lower-cost local brands. For example, an iPhone 7 Plus with 128GB storage received a 16 percent price cut, putting it around the $900 mark.

The big winner though was Oppo, whose product and pricing strategies were most in sync with the demands of the Chinese market, enabling it to end the year with three different models in the top 10. In terms of product strategy, Oppo focused on selfie and social media features, both of which are popular with Chinese consumers in the high-volume middle-tier market, where smartphones cost between $200 and $400. 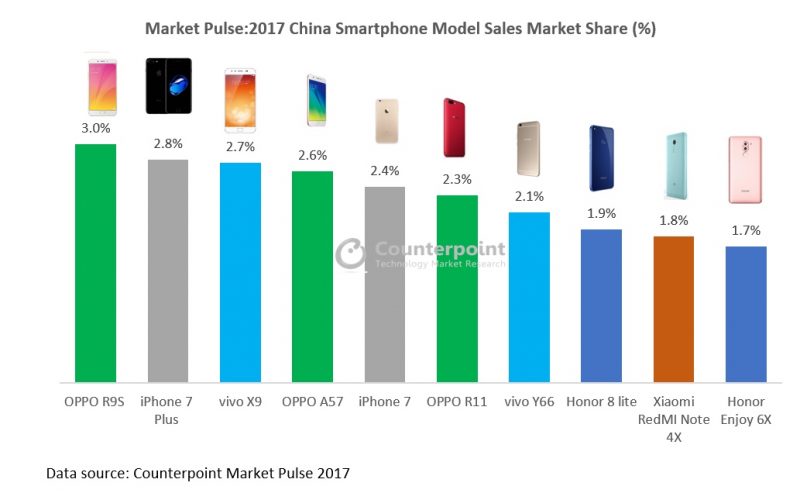 According to the report, higher replacement demand and a bigger dependence on mobile apps has spurred fierce competition in China, which is home to the world's biggest smartphone market in terms of sales volume. Apple fared well, however, managing to ship an estimated 11 million iPhones overall in the third quarter, up 40 percent from the year-ago quarter, according to separate research conducted by Canalys.

The strong growth, buoyed by the launch of the iPhone 8 and iPhone 8 Plus, put an end to six consecutive quarters of declining iPhone sales in the region. Data isn't yet available for the fourth quarter, when the iPhone X launched in China, although the model's high price and supply constraints likely inhibited growth in the short term, despite excitement around all-display/bezel-free phones.

Apple was the fifth largest smartphone maker in China in Q3 2017, behind local brands Huawei, Vivo, Oppo, and Xiaomi, according to Canalys data.

This was just the 7 as well. I imagine the 8 will sell like hotcakes this year as it's a lucky number in China.

Dual camera's are probably one of the main reasons it's more popular .
4

Ironically, the number 'seven' in China is considered to be an unlucky number. However, Apple did release the Product red iPhone 7, which is a color that is believed to bring good luck/fortune in China, Which also might have contributed to the success to the iPhone 7.

I'm pleased with the 7+ on iOS 10. It's like the MBP mid 2012 laptop.
No need to upgrade to a newer model anytime soon and does all that I want.
Reactions: MyMacintosh

Relentless Power said:
Ironically, the number 'seven' in China is considered to be an unlucky number. However, Apple did release the Product red iPhone 7, which is a color that is believed to bring good luck/fortune in China, Which also might have contributed to the success to the iPhone 7.
Click to expand...

I don't think most people who buy smartphones in China pay too much attention to the luckiness of the numbers right now.
4

tzm41 said:
I don't think most people who buy smartphones in China pay too much attention to the luckiness of the numbers right now.
Click to expand...