In April 2008, the U.S. Patent and Trademark Office (USPTO) published an Apple patent application revealing the company's research into ways of integrating social aspects into online shopping as part of enhancements to the visitor experience. As described in the patent application, customers would be able to "see" what products other customers shopping in the online store were looking at at any given time. Customers would also be able to interact with each other, allowing them to ask questions of each other such as why a customer had left one product to look at another one. 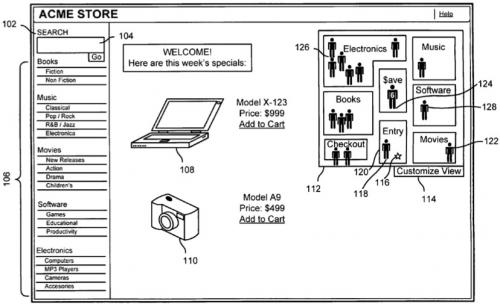 Another example describes the integration of real-time updates into the virtual shopping experience, such as allowing a store owner to "invite" customers already shopping on the site to a chat or other event with a store guest such as an author. The technology would also allow such realistic details such as 3D perspectives and lighting and scenery consistent with the time of day and season of the user's location. 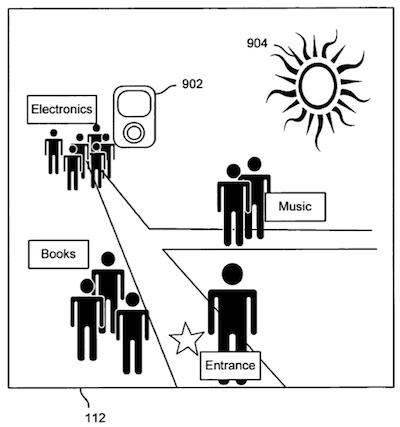 Patently Apple notes that the USPTO officially granted the patent to Apple this morning, and while the granting of the patent almost certainly holds little significance in terms of a timeframe for launching such technology, the event does serve as a reminder of Apple's thoughts on how it might be able to improve the online shopping experience for its customers.

The patent, initially filed in September 2006, is credited solely to David Koski, a senior software engineer at Apple.

Ryan Howard of Dunder Mifflin tried to start an online retail store mixed with social networking once before.

The end results were poor sales and an infiltration of the social networking part by sexual predators.

What I'd like to see is Facebook or who ever allow its users to recommend products they buy and receive a affiliate reward if anyone buys from their recommendation. The one who is providing the service could take a cut and were all happy.
Comment

sbrhwkp3 said:
Ryan Howard of Dunder Mifflin tried to start an online retail store mixed with social networking once before.

The end results were poor sales and an infiltration of the social networking part by sexual predators.

General Magic had this concept together over ten years ago. Going to be very hard to make a claim like this with that prior artwork.
Comment

This whole online social stuff is getting way out there.

When I go online looking for something the last thing I want is a salesman instant messaging me and asking if they can help. That's one of the reasons I don't go to brick and mortar stores. I do not like salesmen helping me unless I ask for help.
Comment
A

Just allow people to wait in online queues to buy things and we will have gone full circle.
Comment

More money for them

Whatever allows Apple to get my hard-earned cash!
Comment

How about some renewed attention on NEW MACBOOK PROS?
Comment

All I need is people I am trying to avoid in the first place by shopping online, asking me stupid questions while I browse a web site.

Put this in the patent don't file Apple.
Comment

Call me sad but the closest thing I have to social networking is iFixit Answers, I've never really been that interested in social networking and don't think I ever will be. I often browse the Apple Online Store just to look at the shiny products and their out-of-my-range-by-a-grand prices and so I'm not sure I want this to go forward. I would pretty quickly get bored of telling happy Apple Geniuses that I'm just browsing.
Comment

So they granted the patent. The idea is old news, in fact the original story showed the exact same diagrams IIRC.

One thing I'm sure I'll never do is interact with other customers in a virtual store.
Comment

interesting idea; I'm surprised they got a patent on it... seems like it's been tried before... (you'd think that ebay or amazon had done this already).

Personally I don't think I would want to interact with other customers.
Comment
T

Yay. I love it when I'm shopping in a real store and sales people harass you and other customers bug you. That's exactly what's been missing from the online experience. Maybe they should take it one step further and make us wait "in line" for the checkout. We could talk ourselves into buying chips and pop while in line and social network with the other people in line. Yay!
Comment

Why do we need a 3D store if the computers are outdated? It doesn't make sense...
Comment

Yeah, when I shop online it's because I want to buy a product, not sit in a chat room. If I wanted to interact with customers I would go to the mall.

Amazon-style statistics tracking is useful. ("After viewing this item, 55% of other customera bought X"). So are the customer reviews. That's really all you need to be able to make informed decisions.
Comment
R

I agree. Is this concept really novel enough to warrant patenting? Same with the "touch-sensitive bezel". I mean DUH, the screen is touch sensitive but man, what a concept to make the bezel sensitive too!?!?

It's getting way out of hand.

Peace said:
I do not like salesmen helping me unless I ask for help.
Click to expand...

You should be flattered instead of being annoyed. I go to shops and the guy is sitting behind the counter playing bejeweled.
Comment

MorphingDragon said:
You should be flattered instead of being annoyed. I go to shops and the guy is sitting behind the counter playing bejeweled.
Click to expand...

MorphingDragon said:
You should be flattered instead of being annoyed. I go to shops and the guy is sitting behind the counter playing bejeweled.
Click to expand...

Thank you! So annoying. At least a hello wold be nice.
Comment
A