Hello, folks... I've been very busy lately trying to get one very simple thing done with my classic Macintosh computers.... I can't really equate the number of hours I have on this project right now, but it is well over 200.

I am attempting to set up a very simple Appletalk network between two Macintoshes... An eMac running OS9.2.2 and a Macintosh Plus running 6.0.8.

The whole project started over a year ago when I picked up a very nice Macintosh Plus with two SCSI drives and a box of old diskettes. I spent days trying to read bit-rotted floppies on those old drives.... archiving everything I could onto the SCSI drives. I posted here about when I first fired up the machine, and got some excellent help in sorting out SCSI ID's.

Anyway, it began to occur to me that very likely, the old tired SCSI drives would eventually fail--and I didn't want to lose the hard-earned contents of those drives. Over 100 floppy disks tested, about 60 fully recovered, not to mention the 100+ megabytes of pre-existing data on the drives themselves. Anyway, I'm getting a bit off track.

I planned to set up an Appleshare Network just between that computer and a 2002 eMac, running OS9. Two computers, bridged together, for the sole purpose of transferring data back and forth. A simple enough configuration. I started by purchasing an Ethernet bridge on eBay.... an Asantetalk box-- tested and listed as working. I plugged it up to my system (using a LocalTalk cable from the printer port to the Asante, then a crossover cable to the Ethernet port of my eMac). I enabled file sharing on the eMac, made one folder on the desktop a "Shared" folder and enabled sharing on that. I configured all settings to "Read and Write" and opened the Chooser on my Mac Plus.

Nada. The Plus didn't see any servers.

Since that time, I have upgraded my Appleshare to Workstation 3.5, I have attempted (without success) to install Internet Router 2.0 onto the hard drive, and I have done many other extremely painful things to try and get it to work. I say painful mainly because the only way I have to get files to and from the Plus is via a SyQuest EZFlyer that has to be disconnected and physically moved over to the area where my B&W G3 sits. I had to buy a PCI SCSI card for it because the eMac is not expandable. The good news is, I was able to archive the old hard drives to my G3.... the bad news is, I still don't have a working Appletalk connection between the two machines.

It might be something silly I'm missing.... it might be a compatibility issue of which I am currently unaware. What I know is that I have spent hundreds of hours trying different things, pulling my hair out, and swearing off Macintoshes forever (more than once).... but those swears are empty.

In any case, I have made several videos of the experiences surrounding this endeavor, most of which are on YouTube or Facebook. I'm almost at my wits end, and I come to the group with my hand out--because I am completely out of ideas. I'm several hundred bucks and a couple hundred hours deep into this mess, and I'm not seeing an end in sight right now.

Disclosure: the Asantetalk appears to be working, as it registers signals from both the Plus and the eMac.... the two just don't see each other in the Chooser. I attempted to run Claris Public Folder on both machines and they are able to see each other, but the software is incompatible with OS9 and freezes up both computers as soon as a connection is attempted.

Apologies for the length of this post.... I am going to bed now and hopefully one of you fine folks has a quick and easy solution for me to read when I wake up in the morning. Here is a video of one of my thousands of attempts to get these machines to talk to one another.

Check that a NON localtalk printer (Stylewriter or ImageWriter) can be used via the printer port on the MacPlus using the SAME Din8 to Din8 cable (with AppleTalk off of course).

This should tell if the printer serial port on the Plus and the cable are good.

Also, ensure you follow the standard power-up sequence. Allow the MacPlus to power up and finish booting BEFORE you turn on the AnsteTalk.

From your video, whilst the eMac seems to be sending data, it's not getting a reply (TX LED does not flash). This seems to indicate an issue on the LocalTalk side.

The Asante only recognizes LocalTalk devices that are powered up and ready when the Asante powers up (about 15 seconds for the Asante).
Last edited: Mar 31, 2019

Yes sir, and thank you very much for your quick reply!

I have followed the power up sequence exactly as it is laid out in the manual. I have also tried a few other things like having the eMac powered on with Filesharing ON before plugging the Ethernet into the Asante... just in case that quick jolt of "input" would register on the Plus.

And you're exactly right on the missing TX in this video. Great eye!

The TX does flash now that I have upgraded to Appleshare Workstation 3.5 with "Responder" in the System Folder. I can now click "Chooser" and "AppleShare/AppleTalk" on both machines and TX and RX will blink almost in unison (as if polling the network for sever input), and yet no luck with the server/client relationship. Two trains passing in the night...

I'll try to take another video in a bit to show all the versions, etc that I'm using currently.

I do have an ImageWriter, but it hasn't been plugged in for YEARS.

So, I need to plug it in, hook it up with the cable, turn off AppleTalk, and try to print a document?

Now I can move files from my eMac to the Plus, but Plus cannot add files to the shared drive. The privileges are set for Read and Write, And I am logged onto the server as a Registered User (who I have also made the "Owner" of the shared folder)

Crazy leap here.... I was shocked when I saw it pop up. I am now well on my way to getting this network going, now I just need to figure out how to share from the Plus to the eMac. The mounted drive on the Plus shows 0K on disk and 0K available. 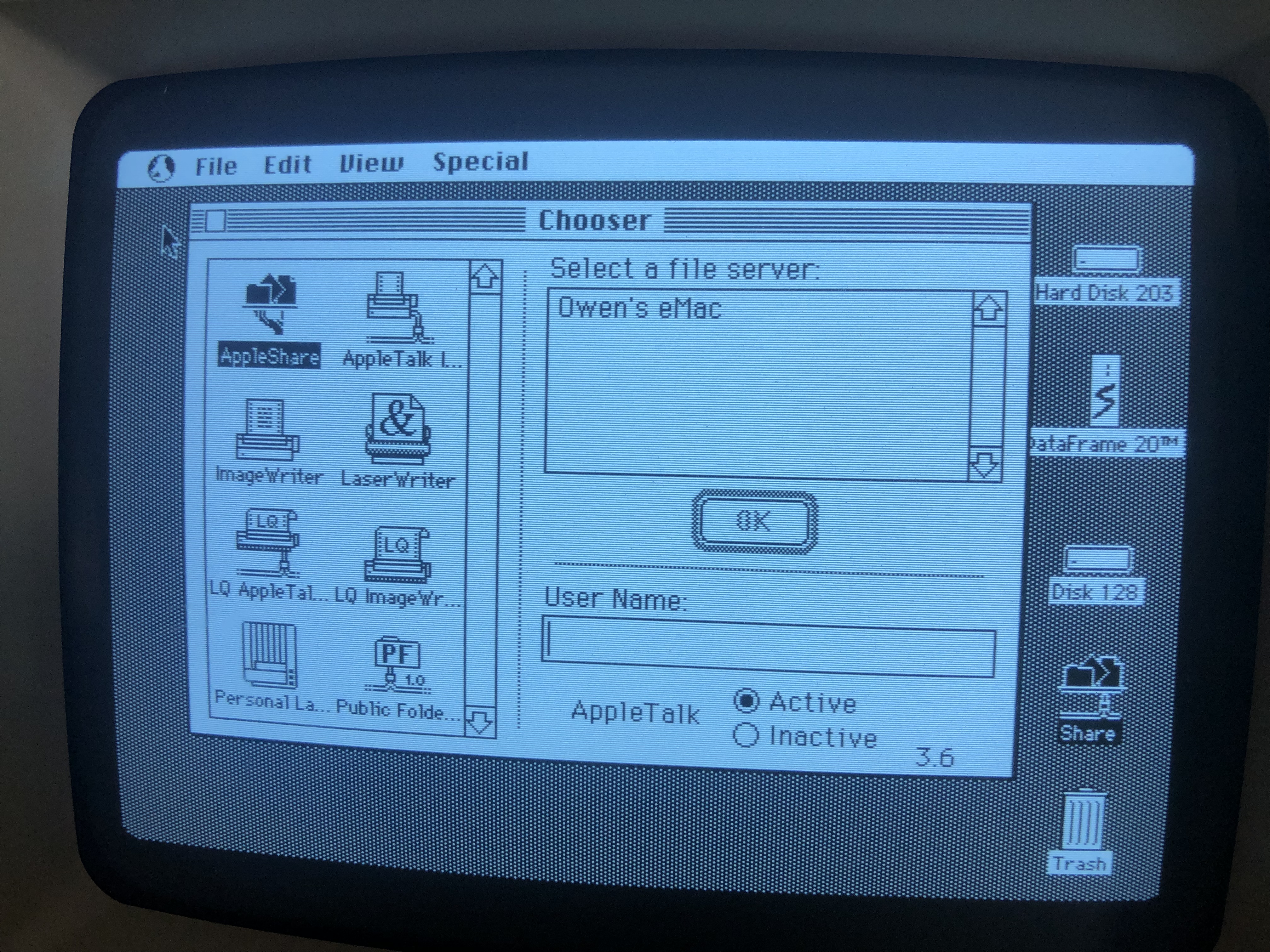 And here it is, in all its glory!
Reactions: bobesch and MacTech68

I might try to mount a 20MB virtual drive on my eMac and make that the shared drive. If the issue is truly that the Plus can't write to such a large partition, then this will eliminate that problem.

Either way, I'll prove or disprove that theory today.

Confirmed.... creating a 160MB volume with Disk Copy, formatting it, and then opening it up for sharing allowed the network to function as expected. I'll do a full write up tonight.

One other thing to look out for might be odd characters (non alpha-numeric) in the folder name or path that is being shared or extremely long folder names within the path.
Reactions: Opry99er