I found this story all over the internet of recent. But MacRumors refuse to put it up as a story so I'm posting it here. So you all can see.

The whole story is about an advocacy group protesting with public demonstrations that Apple is a tax cheat. They believe Apple is cheating on their tax somehow.

There is lots more articles on the subject. And here is some pictures. 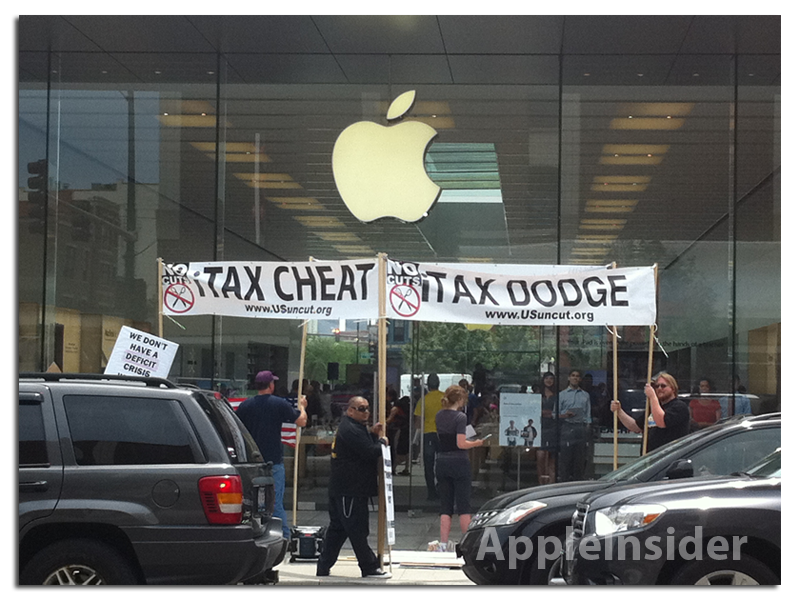 I found this story all over the internet of recent.
Click to expand...

This is old news.


the8thark said:
But MacRumors refuse to put it up as a story so I'm posting it here.
Click to expand...

Did MacRumors really refuse to publish it?
I doubt that. There are threads on this — or at least discussion within threads.


But, that being said, I do think Apple should be accountable and step up and pay up.
Mind you, I am no US die-hard capitalist…

Protesting against Apple for... not breaking any laws?
J

In reply to the question that is the title of your thread...

Yes, probably, just like every large corporation seems to be.

Depends on your definition of cheat I suppose. Is it "cheating" to hire a bunch of accountants and lawyers to legally (probably) manoeuvre apple's profits so that it pays the least tax?

I find it hard to blame the companies when it's the regulators and law-makers who let them do it.

It is a shame big companies can get away with stuff like this, but I think it is safe to say that Apple are not the only ones. That however, does not make it okay.

roadbloc said:
It is a shame big companies can get away with stuff like this, but I think it is safe to say that Apple are not the only ones. That however, does not make it okay.
Click to expand...

Think about it this way, how many of us, look to buy apple equipment from places or vendors that don't charge sales tax (here in the US). Are we any better then apple?

True, the difference in dollar amount is staggering but the act alone alone is similar.
Last edited: Jan 9, 2012

It's not an Apple issue. It's an industry issue.

Microsoft, Apple and Google are among the companies who are seeking billions of dollars in tax holiday to bring back a large amount of cash currently held abroad.

The three tech giants are lobbying the US Congress for a repatriation tax holiday. All the firms involved in this are asking the Congress and the White House to drop the income tax rate from the current 35% to 5.25% for the current year for tax brought back into the country, Seattle Pi reports.

According to the companies this temporary tax break would allow them to bring offshore profit back to the country. According to reports Microsoft alone has $29 billion of cash offshore of which it used $8.5 billion for acquiring Skype.


According to the companies, this would pump $1 trillion into the US economy creating millions of new jobs. Critics point out that supply-side economics have failed numerous times in the past and that the money will actually benefit corporate shareholders instead of out-of-work Americans.

A similar tax break given by the Bush administration in 2005 resulted in 800 companies bringing home $312 billion. Of the total money 92% went to the pocket of shareholders and instead of creating jobs, many of those companies actually laid off workers.
W

Do these guys really need any help?

It's not an industry issue, it's a corporation issue. Not that I agree with them, but you can't fault the businesses for working the tax code. You should fault our country and the generations of legislators that have added more loopholes and burdens, while failing to ensure that everyone pays their share.

Corporations like GE never pay taxes, in fact are typically owed taxes, due to their various manipulations of the tax code.
Last edited: Jan 27, 2012
V

It's everyone's right to avoid taxes as much as legally possible. Anything beyond that is tax evasion. I don't blame Apple or any other companies engaging in these tactics. They are using tools that the law gave them to reduce their tax burden.

Those of you who are angry at Apple for their tactics should petition the government to make it illegal for companies to do that. Calling Apple or any other company engaging in these tactics is just barking up the wrong tree.
You must log in or register to reply here.
Share:
Facebook Twitter Reddit Email Link
Top Bottom