Astropad today launched version 2.0 of its iPad app, which transforms a compatible iPad into a drawing tablet for a connected Mac. Once connected, Astropad mirrors the Mac's display onto the iPad to let users take advantage of the tablet's touch controls for drawing and editing photos in various Mac apps. The new update follows last year's introduction of support for the 12.9-inch iPad Pro and Apple Pencil.

Free for any existing Astropad user, version 2.0 of the app brings a "high-performance Liquid upgrade" to the connected drawing app in order to triple its performance speeds and "massively" reduce any pixelation. The rest of the update adds similar performance-enhancing features to Astropad, including improved image quality and latency, lessening the strain on the iPad's battery, and making the actual drawing performed within the app more naturalistic. 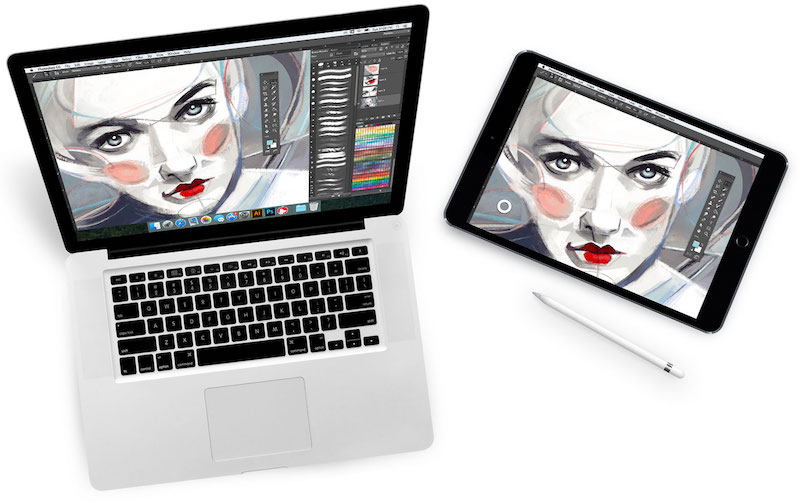 Otherwise, Astropad retains its general, high-quality drawing performance, with touch feedback at 60fps "for super smooth drawing" that results in interesting, diverse pieces of art. Users can connect their iPad to a Mac both via Wi-Fi or USB, with equally solid results, although compatible iPad devices must be running iOS 8 or later, while any Mac with Mavericks or later is required to use Astropad.

For users who have yet to purchase, Astropad Drawing Tablet is available for $29.99 on the iOS App Store. [Direct Link]

Been trying it out this morning. Really, really improved. If they just added keyboard support, I would happily pay double for it.
Reactions: Seifensieder

I wonder if a USB 3 cable on a newer iPad would help?
Reactions: MadDog31
G

Honestly can't wait to try it out and get slmething going, really curious how well performance is via USB connection.

It's really great! Loved it before but this is a huge improvement!

I sold my Wacom tablet when I got my iPad Pro after seeing this app. It turned out to be a premature decision. With the latency and pixelation, it's not be a very enjoyable experience and the app gets in the way far too often, requiring too much work to just get the app centred on a document and ready to use. I'm hopeful that this update fixes a lot of those issues.
C

Hi, I'm pretty interested in this to be honest, does anyone have any information on its use with apps like Lightroom or Photoshop?
Im a photographer, and would be mainly using it to aid with dodge and burn whilst editing.
Are there serious latency issues? Currently I use an old cheapy Wacom bamboo tablet.
Would love to know the opinions of someone using it for such a case.
Thanks.
M

I haven't tried out the update yet, but I had serious buyers regret on the previous version, amittedly I was used to the lightning fast Procreate on the iPad but using Photoshop through Astropad was really treacly. Nothing like the happy experience shown in their video promo.
C

Damn, was afraid it might be to good to be true

I've used it to edit tons of images. I haven't really had a problem with Photoshop. Version 1 wasn't as fast as editing directly on my surface book's screen etc but fairly good. This new update though is a massive improvement. I was playing around with an image in photoshop that I made in procreate and airdropped to my mac pro. Just drawing in some extra details and it felt almost as tight as drawing in a native app on the ipad. Same with Sketchbook pro on mac. That's a laggy program on mac, ipad and pc anyway but it felt about the same as drawing on my surface book version of Sketchbook pro.
C

So is it useable? I mean although I would obviously get other uses out of the iPad, I would be purchasing it for this very reason. I wouldn't be buying one otherwise...

cupcakes2000 said:
So is it useable? I mean although I would obviously get other uses out of the iPad, I would be purchasing it for this very reason. I wouldn't be buying one otherwise...
Click to expand...

Yes it's useable. I've made massive photo montages for billboard ads and made illustrations for magazines with it. It's fine.
C