Following its unveiling at CES earlier this year, AT&T today announced that its new Modio Case for iPad Mini, which enables Wi-Fi only iPads to connect to 4G, will be available for purchase March 20 for $49.99 with a two-year agreement. 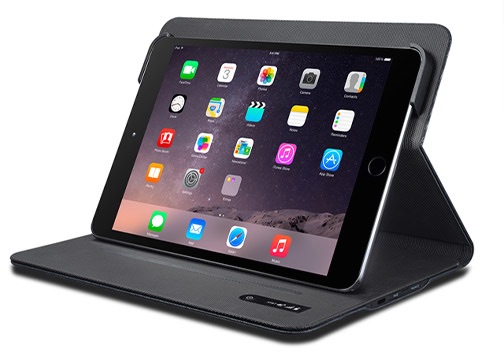 The March 20 release is set only for the iPad Mini, iPad Mini 2, and iPad Mini 3 compatible cases, with a launch for the iPad Air models planned for later in the year. As detailed at its CES reveal event, the Modio smartcase will allow iPad owners with Wi-Fi models to connect to AT&T's 4G LTE network using data available on a user's Mobile Share Value plan. The case connects to the network when prompted, and automatically disconnects when the folio is closed.

Available for $49.99 on a two year contract, AT&T also plans to sell the new case on the AT&T Tablet Installment plan of $10 per month for 20 months. Those wishing to simply buy the Modio outright with no annual commitment can expect to pay $199.99. All Modio users will be required to pay a $10 monthly access charge for using the case on a Mobile Share Value plan.

"The AT&T Modio LTE case is both convenient and a great value for our customers. The case's durability also makes it a natural choice for iPad mini with Wi-Fi users. Connect your iPad mini with Wi-Fi to AT&T's 4G LTE network - the nation's strongest LTE signal - and protect it at the same time." - Jeff Bradley, senior vice president, Device Marketing and Developer Services, AT&T Mobility.
Click to expand...

The case also includes a 4,600mAh battery that'll give users "up to 16 hours of continuous use" and a micro SD slot that supports up to 32GB of storage. The case needs to sync up with the AT&T Modio Data app, which monitors data usage and various data plans, to function. After the first set-up, the case will remember a user's iPad and preferences upon subsequent usage.

The Modio LTE Case will be available in AT&T retail stores, AT&T's official website, and at "select retailers" across the country on March 20.

You're probably better off selling your existing iPad and using the funds to buy a cellular model. At least you'll get GPS too.
Comment

OriginalClone said:
You're probably better off selling your existing iPad and using the funds to buy a cellular model. At least you'll get GPS too.
Click to expand...

The GPS is pretty huge. A lot of my mobile usage is with apps that use location services.
Comment

know what you actually need from the beginning...


OriginalClone said:
You're probably better off selling your existing iPad and using the funds to buy a cellular model. At least you'll get GPS too.
Click to expand...

This is just "convenience" for the shortsighted, at a questionable price.
Comment
0

OriginalClone said:
You're probably better off selling your existing iPad and using the funds to buy a cellular model. At least you'll get GPS too.
Click to expand...

Right?! If you need data enough to buy something like this, wouldn't you have considered the 4G model in the first place? Or have a cellular plan that can tether/hotspot? Also an alternative is TMO's free 200MB plan for life. Buy extra when you need it.
Comment

I think this case / battery can charge the iPad. If that's the case it's cool but that's the only nice thing about it.

No deal plans for new ATT customers? No pay as you go?
Comment
M

It can charge the battery which is kinda a nice touch but this'd really only be useful to those who already have a WiFi iPad mini and didn't think about how handy having 3G is...

Why is it so large? At that size, it should double the memory, quadruple the battery life, and add LTE.
Comment

Im pretty sure its a lot cheaper to just buy a wifi = cellular iPad...
Comment
A

The theory that phones will become the size of iPads is starting to become a reality. Help us all!
Comment
L

there is the added drawback of complicating your life with an AT&T contract....