I don't know if people are aware of this, but the Fn-F1 keystroke (what you'd use on a laptop to turn the screen brightness down) in Windows often causes a nasty hard reset of the machine.

It's happened over a dozen times between the two Core Duo MBPs we have. Generally I keep the brightness maxed and try to remember never to hit that keystroke, but every now and then I forget and... wallop.

Today, I did it again. Tried to turn down the brightness (to see if it would get rid of the flicker), screen went black and when it came back the Mac was already at the progress bar booting in OSX. I needed to work in Windows, so restarted normally, holding down option..

..and this happened. (jpg image, sorry about the quality).

The colour palette was completely messed up, even at this early stage of bootup. Windows booted up fine, but all the colours were off. Started using it for about 10 seconds, then boom, a page fault appeared (didn't stay long enough to read the text) and the machine shut down. Tried several times and the same result.

Tried booting into OSX, and now the colour palette is distorted here too, even during the initial Apple & spinning progress indicator screen on bootup. More worryingly, there's a very noticeable flicker/shake on the screen, most noticeable at the top and about 1/3 of the way from the bottom. Otherwise, OSX seemed completely usable.

Here's a shot of OSX, FYI that red & blue blurry mess used to be a very green & blue shot of the Iguazu falls..

So it looked like the graphics circuity might be fried. I rebooted again, went to lunch, came back and.. everything's peachy. The colours are normal, Windows did display the 'encountered a serious error' dialog, but otherwise seems fine.

Has anyone else experienced problems like this with the Fn-F1 key combo? (I wouldn't recommend trying it 'just to see'!)

Wow, that's pretty crazy. I too have found that fn+F1 crashes windows in Boot Camp. I've only done it maybe 2 or 3 times though and nothing disastrous happened because of it. Glad to hear everything went back to normal. Bet you won't forget again after that!

I'd done it perhaps 5 or 6 times on that MBP, but other than the annoyance there were no after-effects. This time I might just have learnt my lesson!

Is your Mac the same model (a Core Duo MacBook Pro)? I'm curious if current MacBooks/MacBook Pros still have this issue.

whooleytoo said:
Is your Mac the same model (a Core Duo MacBook Pro)? I'm curious if current MacBooks/MacBook Pros still have this issue.
Click to expand...

I have a Core 2 Duo MacBook Pro from November.

I've also experienced random crashes in Windows while in Boot Camp even without touching fn+F1 where it just reboots.

I'm surprised this hasn't been fixed, it's not as if it can be overlooked. "The screen's a little bright, I'll just turn it.. woaaaah!".

Other than this specific crash, Boot Camp has been quite good for me. I guess it is still Beta, after all.

Just out of interest is this in XP, or Vista?

I know my Core Duo macbook didn't have this issue when I had XP in bootcamp on it a while back.

Osarkon said:
Just out of interest is this in XP, or Vista?
Click to expand...

XP for both MBPs here too, haven't tried Vista yet.

Hmmm. This issue has resurfaced.

Every time I boot up, the colour palette is all wrong. However, every time I restart (i.e fully boot, then restart) it's fine. This does suggest a software rather than hardware issue, though since it occurs even during the early stage of restart, I'll probably need to wipe & reinstall both OSX and Windows.

To bring up an old thread, I am having this same issue with Vista Business and my MBP, it the F1 to lower brightness and my screen goes blank and the computer locks up. I am using boot camp 2.0...

Any ideas? This is really annoying.
K

If I've left the laptop a while, occasionally it goes into sleep mode (black screen, white LED pulsing slowly). When I hit space to get back in, after logging in the screen is at full brightness and Windows is behaving as though you've just switched on for the first time (e.g. pop up at the bottom right informing you of wireless networks). Anyway, if I hit Fn-F1 too soon, it hard resets. If I click the balloon pop-up to make it go away, wait until everything seems to be back up and running and then hit Fn-F1, it doesn't usually crash (although I'm still twitchy about pressing it!).

It's doubly irritating because it only happens when the system has gone into full sleep mode and there's no real pattern to when it does this - I can be gone 10 mins and it's sleeping, but go for an hour and it's not.

Occasional crash aside, my MBP's the best XP laptop I've ever had

I should add that in normal use I can adjust the brightness freely with no problems. It's only when Windows sets itself to full brightness after a sleep that I ever feel the need to change the level.
V

Noticed that it would randomly crash using Functions keys in XP, however Apple released an update for bootcamp (using apples software update within xp), which solved crashing whilst in games. Now if ie 7 is open it will crash every time.

Could this be a memory conflict?

Hope this gets fixed soon as its frustrating!

The only software that ever game me a BSOD was written by Apple.

it sounds like driver problems between the display and keboard, did you install the drivers from OSX or did you use the ones from mircosoft?

you need to update now to sp3, not only can you get viruses that do things like that but also driver issues.
R

vegcan said:
Noticed that it would randomly crash using Functions keys in XP, however Apple released an update for bootcamp (using apples software update within xp), which solved crashing whilst in games. Now if ie 7 is open it will crash every time.

Could this be a memory conflict?

Hope this gets fixed soon as its frustrating!

Ok, thanks guys... downloading sp3 now. Will let you know how it goes.

Drivers are from OSX.

vegcan said:
Ok, thanks guys... downloading sp3 now. Will let you know how it goes.

vegcan said:
Ok, thanks guys... downloading sp3 now. Will let you know how it goes.

That's likely the issue. If you can, avoid using Apple's
own Windows drivers. Apple don't seem to be capable
of writing reliable ones. E.g., 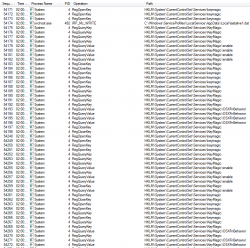 I never got any crashes from FN+F1 or just regular F1...? Im using Boot camp 2.1 drivers and xp sp3. I never had a crash on any of my older MB, MBP or the current MBA.

How do you reproduce this? I wanna see if I can crash it too so I can avoid the obvious "why the heck did my windows crash" later in the future
V

Finally, I found a solution to this problem.