Hey guys okay ?
*
So , I have a MBP 13 " early 2011 .
Until last month the battery it worked perfectly , stand it 6/7 hours.
But from early December until now, I closed it ( sleep ) and 1 or 2 hours later , when you open it again , I saw that he was trying to " recover the session " as if he had exhausted the battery.
So I decided to check and used CoconutBattery , and he charged that my battery was just managing to hold 350mHa a total of 5500mHa (can not remember the value of head, but I think it is ) , ie the battery was not holding but not 20 minutes unplugged .

And yesterday was the season finally, I was using it, and suddenly he turned off, I tried turning it on again in every way, but nothing, so I opened it, removed the battery, waited a while and put it back. He turned on, but the battery does not leave 0% (even with the charger) and it ta little slow (it has 8Gb of Ram and I just format to put the Mavericks, I was working perfectly). I executed again CoconutBattery and he accused the next state attached below. 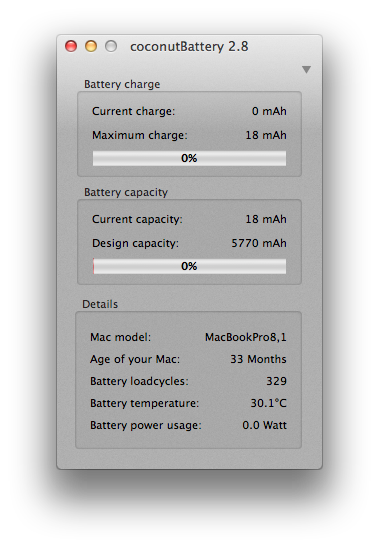 I know I should replace the battery as soon as possible, just do not buy the original, because it is expensive here in Brazil (and I intend to change notebook in the middle of next year), I do not know a good website where I could buy a new battery someone recommends?

It may not help but for battery, power, or charging issues, you might try resetting the SMC. (PRAM/NVRAM has nothing to do with these issues. Resetting it will not help.)

As far as buying a replacement battery, I wouldn't trust or recommend any non-Apple battery or charger, due to the number of problems reported with "knockoffs". Also, there is no assurance that non-Apple components will have the same charging technology that Apple uses, involving the battery, the MagSafe adapter and the Mac's logic board. Apple has not licensed its MagSafe adapter technology to any 3rd party. It's not worth risking your Mac to save a small amount of money.
​
The link below should answer most, if not all, of your battery/charging questions. If you haven't already done so, I highly recommend you take the time to read it.
Apple Notebook Battery FAQ​
T

Would using it on power only be an option for that half year?

No AppleCare I assume? You could still have it checked at an Apple store, if such a thing can be found anywhere near you.
You must log in or register to reply here.
Share:
Facebook Twitter Reddit Email Link
Register on MacRumors! This sidebar will go away, and you'll see fewer ads.
Sign Up
Top Bottom