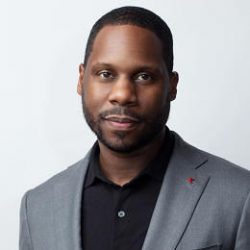 One of the instrumental executives who oversaw the rise of Beats By Dre as a brand, chief marketing officer Omar Johnson, has announced that he is leaving the company on November 1 (via Fast Company).

Johnson didn't give a specific reason as to why he is leaving the company, but his departure date will mark six years since he came onboard in 2010.

Back then he was vice president of marketing before being named CMO in 2012, two years before Apple would come in and acquire the brand for $3 billion.

Working with the ad agency R/GA, Johnson helped craft some of the most well-known Beats By Dre advertisements, fueling its "transition from a curiosity to a constant presence in pop culture."


An example of one of the ads Johnson helped create​

Although his departure from the company wasn't explained, Beats co-founder and current Apple Music executive Jimmy Iovine commented on the announcement, describing Johnson as "one of the most talented marketing executives" he's ever met and an instrumental factor in what Beats By Dre eventually became.

In an email, Beats co-founder Jimmy Iovine said, "Omar Johnson is a one of the most talented marketing executives I've ever met and we couldn't have built Beats without him. He has my support in his future endeavor."
Click to expand...

After Johnson leaves, his former "right-hand man" Jason White will become executive vice president of marketing at Beats. Before he's gone for good, Johnson is said to focus on putting the finishing touches on two new global brand campaigns that will be debuting soon.

No doubt that Beats by Dre is a great brand, but it's position within Apple remains a mystery.

If they wanted help with Apple Music licencing they could have just employed Jimmy Iovine and Dr Dre on a collaboration basis.
Reactions: 32828870

Probably finally tried the product and realized how horrible they are
Reactions: Benjamin Frost, 32828870, Avieshek and 1 other person
A

What product? Certainly it can't be a MacBook Pro, because they don't seem to exist anymore.
Reactions: v0lume4

the Beats Powerbeats 2 have been one of the best tech purchases in my life.
Reactions: ogun7

With this level of ingenious hilarity, you should write for Hollywood

I worked on the commercial featured in the article!
Reactions: AdonisSMU, RoccoFan, Dekema2 and 5 others

Interested to know where he is moving next.
Reactions: ogun7

I wish him luck.

So does that leave one other black person working at Apple?!
Reactions: Benjamin Frost and ogun7

I thought that was Jason Derulo for a second!
Reactions: Benjamin Frost
2

He did a great job, cause the early beats products were utter garbage and still sold. Kudos to him and his team
Reactions: GrumpyMom

Nah, he just has no idea how to market a Lightning headphone. ;-)

Yes, and not female. That should give you something to comment on.
Reactions: Damian., pdaholic, Weaselboy and 1 other person

dmylrea said:
Yes, and not female. That should give you something to comment on.
Click to expand...

you must be great at parties.
Reactions: Benjamin Frost

Yep. Of Apple'a 115,000 employees, only one of them is black.
Reactions: Benjamin Frost and ILuvEggplant

Apple is going to hire another black. They're increasing the quota every year.

NBA should do something too. Too many blacks there.

RowellE said:
I thought that was Jason Derulo for a second!
Click to expand...

Really? I thought I saw more than one black shop-floorer at my Apple shop the other day. But perhaps you mean non-retail.

At any rate, his not giving a reason for leaving leaves a mystery in the air.

ILuvEggplant said:
you must be great at parties.
Click to expand...

Actually, being completely unbiased because I don't know who either men are or what they look like, but looking at Google images, I could see how someone would say their looks could be mistaken.
You must log in or register to reply here.
Share:
Facebook Twitter Reddit Email Share Link
Register on MacRumors! This sidebar will go away, and you'll see fewer ads.
Sign Up
Top Bottom