You are using an out of date browser. It may not display this or other websites correctly.
You should upgrade or use an alternative browser.
5

After 20 years of using a mouse I'm extremely surprised that after just a few days trackpad became a preferred input. I've set quite a few gestures (some came from using the MX revolution mouse, like copy & paste).

As there is always room for improvement, I was just wondering if you could post your gestures.

I'm still having problem with cmd+click (to open in new tab). I used the wheel click on a mouse. Two finger click would be ideal, but you can't set that. For now I'm using the left corner click.

Not a fan of the five finger gestures but I like your gesture to quit apps. Try using a four finger tap to cmd click.
Comment
G

I use 4-finger-tap to close an app, and 4-finger-click to quit it.

Also, 3-finger-swipe (up & down) to go between tabs in Chrome. 3-finger-tap to open a new tab.

BTT is def one of if not the best app for Mac.
Comment
W

I'm using Snow Leopard so "Mission Control" is actually Expose(all windows) for me. Most of the options work very well for me with the exception of the Corner Clicks. I have problems finding the right spot. Beyond that, I am very happy with BBT and also BetterSnapTool which I use to define uses for middle and right clicking on the Red/Yellow/Green buttons. I just have to remember not to right click the red button on a Finder window.

I have a lot more than you guys. The best ones I think is three finger swipe up for closing windows and down for opening tabs or new windows of terminal, finder, ... CMD+W and CMD+N/T
Other very good ones are three finger tiptab right for next track. Very neat directly in between work when you have some music running in the background.
My four finger swipes one must understand as triggering TotalSpaces.
I also invert the MC and show Desktop gesture because it more naturally works with the three finger up/down. It is supposed to emulate pulling down a document from the back of your desk or throwing it out there.

Chrome the same as other browsers. Two finger tiptab is very neat for switching tabs left/right. Combined with the single tiptab it is very good when one wants to go three or four pages back quickly. Also the tiptabs work like the mouse in Opera.
I do use the swipes too but I wouldn't use those up down swipes for anything switching tabs. It is way better for closing and opening.

This is terminal but finder and many only got the CMD+N. Zoom as it is sometimes need when there is a lot of output but only for short periods of time.

I also added multimonitor short cuts that I can recommend to anyone that often works on two displays. I don't hold much love for the idiotic full screen mode but maximize by BTT is done the Snap way which is nice.

I am with Z17 that five finger gestures are bad. Disable some in trackpad prefs and make them your own. Five finger is for very rarely used stuff. I use only one for shutting of the display when some background stuff needs to finish and I want to save max battery life. 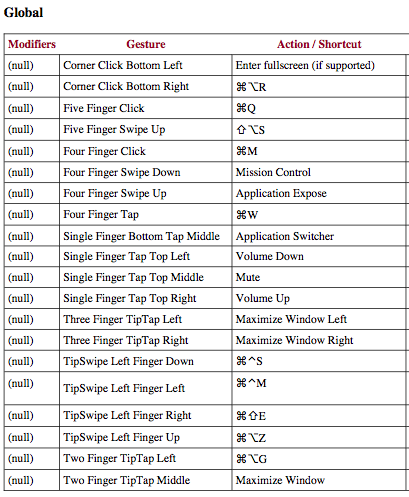 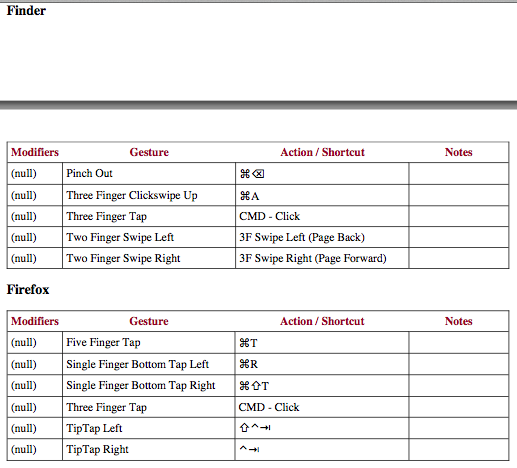 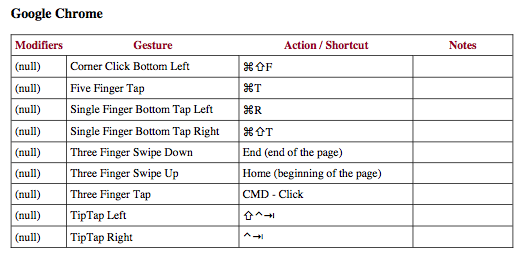 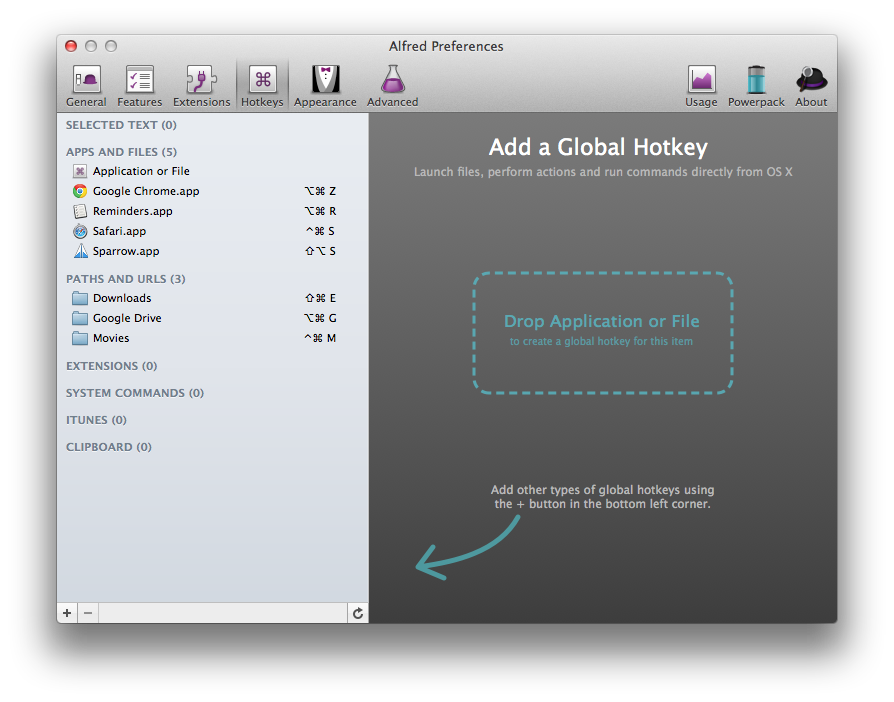 Thanks everyone for their input. Since my first post I have added a couple of gestures and also removed a few.

I use left bottom tap to cmd+click. It quite convenient, as I can use it with my thumb.