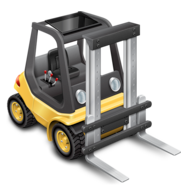 Binary Nights has dropped the price of its file-transfer app ForkLift to $0.99, down from $29.99, for a limited time.

ForkLift is a well-reviewed file management app that offers FTP, SFTP, WebDAV, Amazon S3, iDisk, SMB, AFP, and NIS support, as well as a dual-pane, tabbed file management window -- it works as a Finder replacement for power users as well.

ForkLift is a robust and elegant file manager and FTP/SFTP client, fully embracing the Apple methodology of bringing incredible power to a beautiful and easy-to-use, approachable interface, it also integrates multiple features you would normally buy in many separate applications. Batch Rename, App Deleter, Archive creation & management, powerful Folder Sync, and the ability to Split and Combine large files are all at your fingertips.
Click to expand...

Binary Nights didn't specify when the price will rise back to $29.99, so interested users should take advantage while they can. ForkLift requires Lion.

ForkLift for Mac is temporarily available for $0.99 on the Mac App Store. [Direct Link]

Great deal - been looking for a new FTP client.

Is it as good as Transmit? I heard that one is the best SFTP client for OS X.
Comment

Just bought a copy as well, great offer. Thanks!
Comment
B

Just picked it up, awesome deal. Thanks for the tip!
Comment

Picked it up and now Finder annoys me more and moreJust some simple functions such as dual panels and path bars should be in Finder.
Comment
S

Great app, been using it since v1. Thoroughly recommended if you don't already have a copy.
Comment
P

Bought! Nice app, for sure. And doesn't require Java, which is nice.
Comment

I've been using this since the alfa version of 2.5. Thanks for the heads up! Very nice deal
Comment

bogatyr said:
Just picked it up, awesome deal. Thanks for the tip!
Click to expand...

What will happen to it on June 1st, when App Sandboxing is officially the rule?

Is this just a big bang to go out on before Apple shuts them down for not complying with the sandboxing requirement?

(Although between you and me, it already is the rule. I submitted an update to Apple May 2nd. On May 7th, they told me it was in review. It's over two weeks later, and I haven't heard a peep from them. My app isn't that complicated... if they wanted to verify it makes battery predictions accurately, they'd know within a week of starting the review. I suspect their plan is to just wait until June 1st, then tell me it's rejected on account of not being sandboxed. Oh well, I'm nearly done with sandboxing it anyways, so I'll probably just withdraw the update they're "reviewing" now and submit a sandboxed version on Monday.)
Last edited: May 22, 2012
Comment

What a bargain! I hope it will be on sale for a few days cause I'm still waiting for my screen to be delivered so that I can finally make the transition to the Mac. I've been spending the last few days hunting for apps to buy and Forklift was picked as a definite purchase.
Comment
C

RoelJuun said:
Picked it up and now Finder annoys me more and moreJust some simple functions such as dual panels and path bars should be in Finder.
Click to expand...

Look into TotalFinder, though I agree dual panels (and tabs) should be a part of the finder.

The Finder has a Path Bar, you just have to enable it. Not as nice as the Finder's though.
Comment
B

Finder does have a path bar, actually


RoelJuun said:
Picked it up and now Finder annoys me more and moreJust some simple functions such as dual panels and path bars should be in Finder.
Click to expand...

Just pointing out that Finder does have a path bar; View > Show Path Bar. You can drag & drop to the path bar, also double clicking an icon in the path bar changes to that folder.
Comment

What will happen to it on June 1st, when App Sandboxing is officially the rule?

Is this just a big bang to go out on before Apple shuts them down for not complying with the sandboxing requirement?
Click to expand...

Buy the non- MAS version for a non crippled version, if the MAS version is adversely affected by sand boxing.

How is this compared to Transmit 4? Besides the difference in price?
Comment
S

Sweetfeld28 said:
How is this compared to Transmit 4? Besides the difference in price?
Click to expand...

That's what I asked too, but no one replied.
Comment
E

shurcooL said:
That's what I asked too, but no one replied.
Click to expand...

I just bought it - god damn, it's perfect. LOVE IT. Looking forward to utilizing all these new features. Simply a great app, and a STEAL at $0.99.
Comment

shurcooL said:
That's what I asked too, but no one replied.
Click to expand...

I own both, though I use an older version of Forklift since I'm on 10.6. I like Transmit better as an FTP/scp/SFTP client, but as a file manager, I like Forklift better. The dual pane mode on Forklift, to me, is better than Transmit. Transmit, however, is insanely fast for remote connections - I'd say faster than Forklift, but I haven't run lab-like tests to give you exact numbers. But for local use, Forklift is like Finder for power users. At least that is how I use it.

I have a 10.7 laptop, so I purchased 2.5 from the MAS and will check it out more this week. 2.0.x still runs on 10.6, but 2.5, from the new feature list, does look like it should have been named 3.0 instead. Impressive that it is a free upgrade [and yes, i know i could have copied my 2.0.x from my 10.6 system to my 10.7 and ran the auto-update feature to get 2.5, but since I now have licenses for both the MAS and non-MAS versions, it will be easy for me to see differences in the two as sandboxing is enabled for future MAS versions of the app; for 99c it was a no brainer ].
Comment
P

Bought ForkLift for .99, just in case I need this type of app later. Although the last time I used an FTP client was Windows CuteFTP years ago to update a little webpage.

Next I'll need an FTP server app, any recommendations? Was thinking of trying to set up a FTP site on my Mac for occasional use by a friend across town to grab some of my files. Normally I'd just put the files on a flash thumbdrive and give it to him but his computer USB connectors are broken (machine dropped on floor during an extended wine-tasting session).
Comment
You must log in or register to reply here.
Share:
Facebook Twitter Reddit Email Share Link
Register on MacRumors! This sidebar will go away, and you'll see fewer ads.
Sign Up
Top Bottom