BlackBerry today announced that it has filed a lawsuit against Typo Products, a company that developed a BlackBerry-esque keyboard case for the iPhone designed to allow users to type with physical keys. 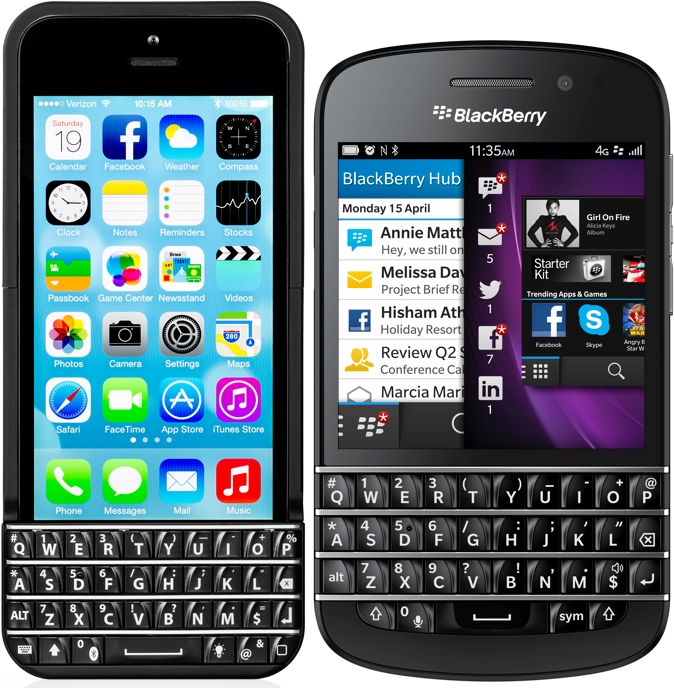 The Typo Keyboard on an iPhone next to the BlackBerry Q10​
First announced in December of 2013, the Typo iPhone Keyboard Case was created by Laurence Hallier and media personality Ryan Seacrest (of American Idol fame), who reportedly invested $1 million into the product.

As detailed on the Typo's product page, many of Seacrest and Hallier's friends and colleagues carried two phones - one for typing and correspondence and an iPhone for other uses - a problem that the two aimed to solve with the snap-on Typo Keyboard.


​
According to BlackBerry, Typo has both infringed on patents and "blatantly copied" the BlackBerry keyboard, leading to a lawsuit filed in the Northern District of California.

"This is a blatant infringement against BlackBerry's iconic keyboard, and we will vigorously protect our intellectual property against any company that attempts to copy our unique design. From the beginning, BlackBerry has always focused on offering an exceptional typing experience that combines a great design with ergonomic excellence. We are flattered by the desire to graft our keyboard onto other smartphones, but we will not tolerate such activity without fair compensation for using our intellectual property and our technological innovations," said Steve Zipperstein, BlackBerry's General Counsel and Chief Legal Officer.
Click to expand...

Currently, the Typo iPhone Keyboard Case remains available for pre-order for $99 and is scheduled to make its public debut at CES 2014 next week.

Good for them. Look at that design. There could've been something done to differentiate.
Comment
W

That A Boy RIM.

If you can't innovate your way out of a hole, Sue someone!!!
Comment
C

They don't use the same font, some of the keys are in different locations or nonexistent, IT IS REMOVABLE, and it is a different shape. The plastic of the keys themselves is about the same and that's it. If blackberry thinks this is worth fighting, why don't they make their own "blackberry" style keyboards for iPhones and see how well it works for them?
Comment

Yes they look the same, but its no different to HP, Dell or Samsung copying Apple's MacBook and MacBook Pro Chiclet keys. Some HP laptops look almost identical to the MBP range its unreal.

"And yes I know Sony did do some work on Chiclet key design in 2004 and the even the Sinclair range if you want to go back that far" , but apple popularised that type of design. I'm sure if you look into it there are other devices which resemble the Blackberries key design more so than this.
Last edited: Jan 3, 2014
Comment
X

Samsung copied their designs in the past too.
Comment
I

BlackBerry sure is desperate for some cash. Even if they have to stoop to this level.
Comment

Also, I think that keyboard case looks very poorly built and thought out. It appears to make the phone far too long and the edges and back appear to be of poor quality. Surely someone can come up with a better keyboard solution than that for the price
Comment
L

I have seen a Samsung laptop literally identical to Apple's MacBook Air. The thinness, the keyboard, trackpad and I also think the material used. Apple didn't sue Samsung because of that.

I think this is a great product but quite pricey for a plastic keyboard.
Comment

I agree with RIM. Although at this point with RIM, it almost doesn't matter. Legal costs will just cripple them further.

However, they'd probably make more money selling keyboards like that than their still-stuck-in-2007 Blackberries.

Myself, I wouldn't pay for that ugly *** keyboard to be anywhere near my 5S.
Comment
M

oh lord, these blackberry folks need a red pill intervention, even if they win, who the hell would want a keyboard on their iphone? hellooo!
Comment
H

I can't believe they stole the qwerty layout. I think they should have differentiated themselves by changing the order of the keys, and then marketing them to dyslexic people.
Comment

it looks interesting for those who want a keyboard, but it is copied. In the renders it seems like there is a gap between the screen and keyboard. that should be flat.
Comment
H

That bottom right square, is that the home button? Not sure how this works with the 5S fingerprint scanner?
Comment

oh dear a black on white qwerty keyboard on a BLACK iphone. what were they thinking!!!! should have gone with yellow isnt it super obvious???

either way those buttons are SO tiny, i never understood how people can even hit those
Last edited: Jan 3, 2014
Comment

They could have at least used a different font.
Comment

How do you even get to the home screen with that keyboard on it?
Comment
L

Here is a side-by-side comparison of Apple's 11-inch MacBook Air next to Samsung's 11-inch Chromebook. And no lawsuit filed against Samsung regarding this. 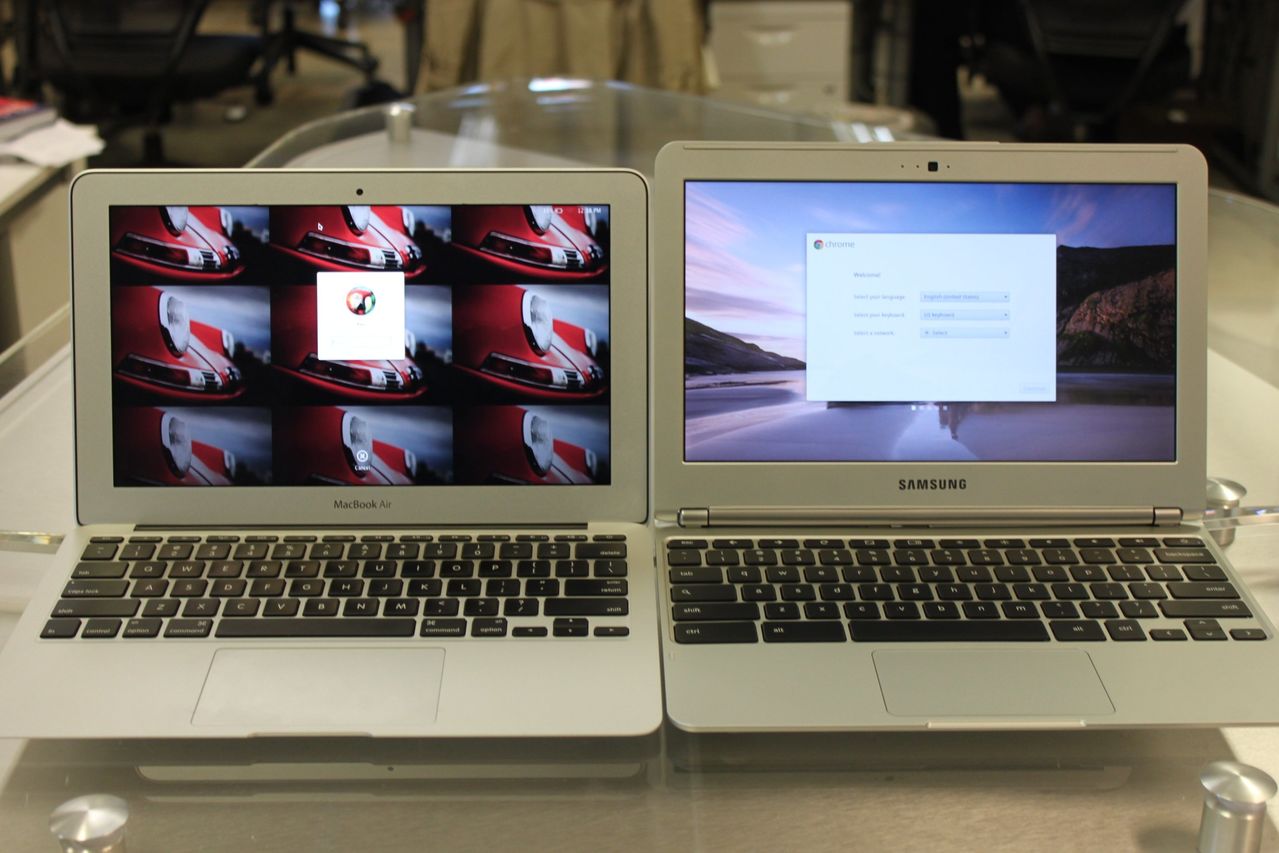 Heltik said:
That bottom right square, is that the home button? Not sure how this works with the 5S fingerprint scanner?
Click to expand...

Yeah, that is your new "home button" so no more fingerprint scanner.


djtech42 said:
How do you even get to the home screen with that keyboard on it?
Click to expand...

This lawsuit may backfire due to the Streisand effect. The publicity caused by the lawsuit will sell more of this and other tiny iPhone keyboards, and perhaps later encourage tons (too many or too hard to sue) of offshore companies to make and sell copies.

Or is thus the effect they intend? (Massive Free publicity for their close-out phones by suing someone?)
Comment

In my opinion, the Typo keyboard is too similar looking to the BB keyboard. I don't care about the font used or the symbol placement ... it's the shape of the keys that the problem. I think the way the keys are scallopped makes the typo look just like the BB keyboard.

I think BB would have a stronger case if they have more than one phone that uses this "iconic" keyboard. All I could find was the Bold that used these types of keys.
Comment