Apple is working on a combined Apple TV with HomePod speaker that has a camera for video calls through a connected television set, according to Bloomberg's Mark Gurman. 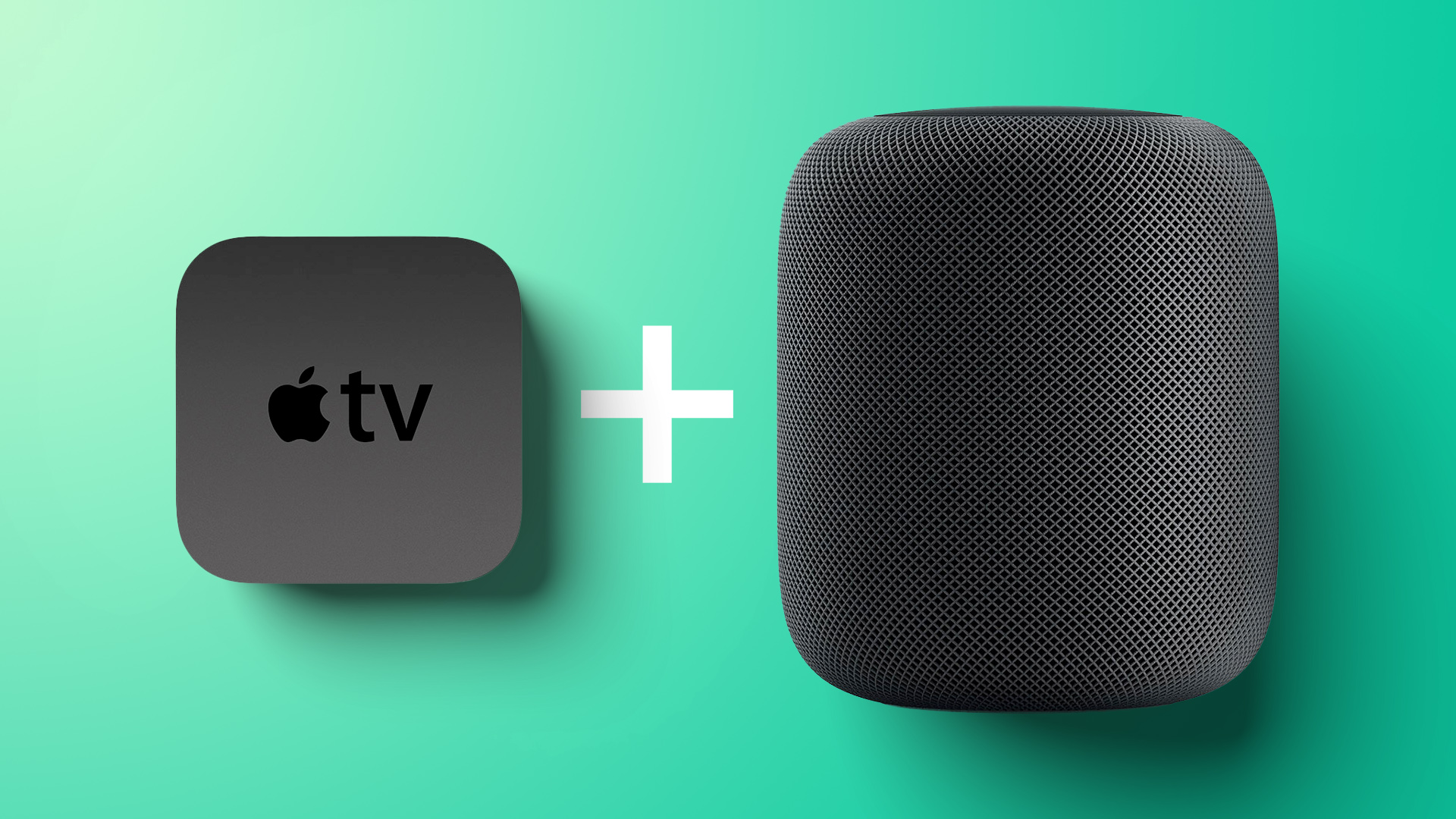 The company is working on a product that would combine an Apple TV set-top box with a HomePod speaker and include a camera for video conferencing through a connected TV and other smart-home functions, according to people familiar with the matter, who asked not to be identified discussing internal matters.

The device's other capabilities would include standard Apple TV box functions like watching video and gaming plus smart speaker uses such as playing music and using Apple's Siri digital assistant.
Click to expand...

Following disappointing sales, Apple discontinued its original high-end HomePod in March, leaving many wondering if the company was working on a successor. The HomePod mini, which launched last year, has been much more popular thanks to its lower price.

Apple unified its engineering teams for HomePod and Apple TV last year, suggesting an integrated device offering the best of both worlds could be in the offing.

However, according to today's report, the product's development is still in the early stages, and Apple could choose not to launch the product or change key features.

Apple is known to be working on an updated version of the Apple TV that will allegedly have a gaming focus with an updated remote control, a faster processor, and increased storage capacity, although it seems likely that today's report is referencing another potential future product. Signs of the new Apple TV have been showing up in iOS since January 2020, so we are expecting to see a new Apple TV launch in 2021.

Today's report also mentions that Apple is working on a concept for a future HomePod design that has an iPad connected via a robotic arm, which could follow users around a room during video calls.

This is what I've been dreaming about since the pandemic began.
Reactions: michaelnugent, Baron Thompson, BGM and 2 others
S

So much for Tim cracking down on leaks. Seems to be more than ever at the moment.
Reactions: Baron Thompson and zeezun
B

But will it have 720p camera with improved AI....
Reactions: enrvuk, Jony Ive and Co., Abombito and 12 others
S

This reminds me of Jobs' presentation to introduce iPhone...
Reactions: G5isAlive, oneteam and erniefairchild1
E

Eh, bundling a bunch of stuff together that we didn't ask to have combined.
I don't think this makes sense. I really can't see the point. Never mind the practical nightmare of having to place the speaker so that the camera is reasonably positioned for picking up your face for video conferencing - all while it has to be physically connected to the TV display for streaming. Ugh.
Reactions: DoStevo, aylk, Prince Akeem and 26 others

If they basically make a Sonos Beam with an Apple TV built in that uses ARC so you can use it as a soundbar then take my money! Been wanting a beam for a while but this would completely replace it
Reactions: Arran, aylk, terpsbball2002 and 12 others

What I was imagining is that that a high quality HomePod Sound Bar (with HDMI/TOSlink IN so it can support something besides the AppleTV like the HDTV ARC/Blu-ray/TiVO combined with HomePod (not mini) Stereo or Quad (with HomePods in the front HomePod minis in the back) for Dolby Atmos and 5.0 sound. The result would be pretty much the best home theater sound system at any price.
This is still double Apple, it's not too late!
Reactions: yadmonkey, aylk, im_to_hyper and 6 others

Granted I've been wrong a couple times in my life (my wife never let's me forget), but this sounds like a weird combination.

1. An Apple TV with a single speaker? Do people not want stereo sound anymore when watching TV?

2. The large HomePods weren't popular because they were considered too expensive. How does throwing in an Apple TV, a screen, and a remote make it any less expensive?

3. Does this combination provide anything unique? We can already do FaceTime calls with our phones, laptops and tablets quite easily. We already have media streamers in all our TVs built in. Many of us already have smart speakers in our homes.

In short, I hope I am wrong again, but I struggle to see the value of this "product".
Reactions: DoctorTech, SonOfaMac, incoherent_1 and 29 others

markfc said:
Wow, only about 12 months to late.
Click to expand...

the integrated device exist already and is called iPhone.

Quality loudspeakers should be positioned based on acoustics and not where I want to make a videocall -
and most Apple TVs anyhow are already connected to an AVR that provides the loudspeaker connection.

So yes, they could integrate video-calling into an Apple TV - but it seems very strange to integrate a loudspeaker
in the line of the original HomePod.
Reactions: lars666, bklement, Captain Trips and 1 other person
J

That would be awsome and this is also the reason why I don‘t belive it. Apple doesn‘t care about us enthusiasts, they only care about cheap market share for their subscription service (tv+ app on tvs)
Reactions: 1258186
S

AppleTV with a speaker makes a lot of sense to me. More sense than a HomePod without HDMI output.
Reactions: Icaras and jont-fu
S

I know they advertise hard so maybe people are buying them for their non-tech savvy relatives
Reactions: 1258186
S

Quality loudspeakers should be positioned based on acoustics and not where I want to make a videocall -
and most Apple TVs anyhow are already connected to an AVR that provides the loudspeaker connection.

So yes, they could integrate video-calling into an Apple TV - but it seems very strange to integrate a loudspeaker
in the line of the original HomePod.
Click to expand...

My wife and I want to make long video calls relaxing on the couch at home with our friends who are on the other side of the world.

That’s not an enjoyable experience holding a phone or huddled around a laptop.

Ambient technology is the future.
Reactions: Arran, enrvuk, gnomeisland and 3 others

Maybe this is the apple television ?
Reactions: svenning
B

I replace my Apple TV more often than I care to replace my speakers. That might be a problem.
Reactions: diandi, Beerstalker, LeadingHeat and 1 other person
1

Most people have a smart TV now with the Apple TV app built in. I don’t think we actually need a separate Apple TV box anymore.
Reactions: aylk, Zorori, insomniac86 and 5 others
1

George Dawes said:
Maybe this is the apple television ?
Click to expand...

That would be the most sensible idea with everything integrated into the TV so there was no need for separate boxes or speakers.
Reactions: SirAnthonyHopkins

I want homepod capability connected to the receiver and speakers I already own.

I can’t see this being a real product. Most current Apple TV’s are likely hidden away in a cabinet. HomePod speakers are in the corner of the room. The tv screen itself is in the center of the wall. This product wants to be all three of those devices...
Reactions: diandi, sunwukong, darkslide29 and 3 others
1

I know they advertise hard so maybe people are buying them for their non-tech savvy relatives
Click to expand...

Portal would seem to be the perfect product for the pandemic with elderly relatives stuck at home unable to see their grandchildren. I’ve no idea how many they’ve sold.
P

I just want a new Apple TV. Been waiting for a year to get one because the dang current one is so old, and I hope they’re going to do something great for Apple Arcade - hopefully something with the graphics processor they’ve been rumored to be developing.
Reactions: playaproved and Luke2kk
M

Would be interesting to see this when it eventuates. Maybe a family of products, not just one. An Apple Soundbar/TVPod could be cool.
Reactions: aylk and 211
You must log in or register to reply here.
Share:
Facebook Twitter Reddit Email Share Link
Register on MacRumors! This sidebar will go away, and you'll see fewer ads.
Sign Up
Top Bottom