Bloomberg today announced that its Bloomberg Radio service is now available on Apple Music in over 100 countries around the world, including the United States, Germany, Hong Kong, and Japan. 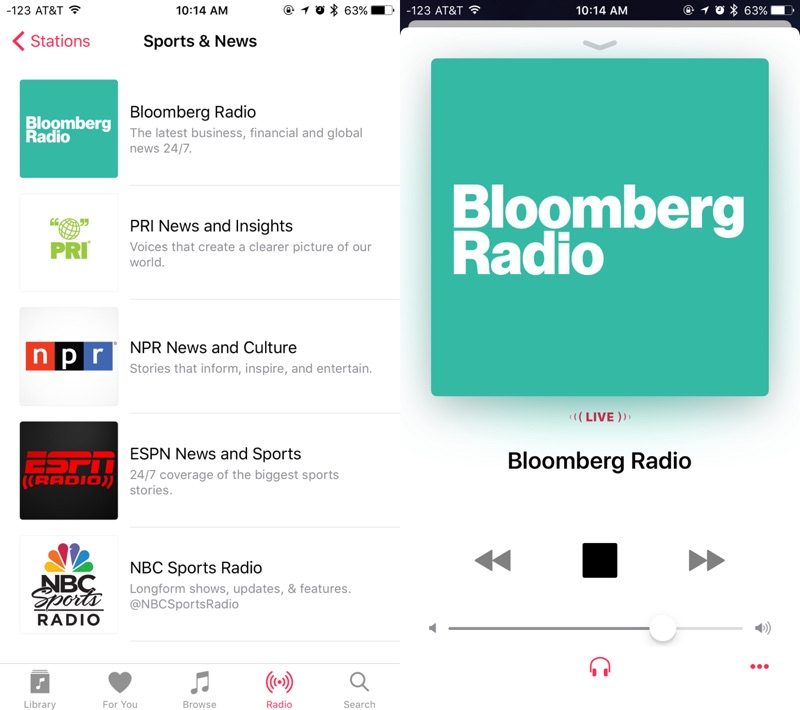 For more than 20 years Bloomberg Radio has been known for its breaking business coverage, global news, market updates and interviews with economists and world leaders. As Apple continues to innovate with new apps and products, we are excited to be able to offer their customers new ways to engage with Bloomberg Radio and other Bloomberg content.
Click to expand...

Bloomberg Radio, accessible via the Radio tab in Apple Music, is one of the few Apple Music radio stations that offers news rather than music. Listed in the "Sports & News" category, Bloomberg Radio is free for all listeners like other news stations. An Apple ID is all that is required to log in and listen.

Bloomberg Radio is available to all Apple users with an Apple ID as of this morning.

And when will local radio from FM and AM in HD be available? Not that it matters but there are some good sub-radio stations through HD. Either way a lot of talk radio stations need more music and I am not talking about Beats1.
Comment
B

I dont even get stations in Apple music. How? Under the radio tab, all I get is beats. (Norway)
Comment
H

Ballis said:
I dont even get stations in Apple music. How? Under the radio tab, all I get is beats. (Norway)
Click to expand...

Tap "Explore All Stations" then go to "Sports & News"

I didn't know it existed either until this article lol
Click to expand...

I think maybe Norway has been omitted. All I can find is explore beats1
Comment
H

Ballis said:
I think maybe Norway has been omitted. All I can find is explore beats1
Click to expand...

Maybe. I included screenshots in case they help.

Its now being shown in the Featured Stations section. I didn't know Apple Music did talk either. Seems like they may be trying the same approach to radio that they allegedly have not been able to do for TV.
Comment
B

HopefulHumanist said:
Maybe. I included screenshots in case they help.
Click to expand...

Thanks man! Looks like you guys have a newer interface than we have here. Here is what I see

Ballis said:
Thanks man! Looks like you guys have a newer interface than we have here. Here is what I see
Click to expand...

In Spain we have more stations but any of them are news or sports, I think before there was BBC world but now is not available.
Comment
H

Ballis said:
Thanks man! Looks like you guys have a newer interface than we have here. Here is what I see
Click to expand...

The interface change is because I'm running the iOS 10 beta. I'm not sure if you need to be on iOS 10 to see the news and sports radios though.
Comment
F

I listen to Bloomberg for free on commercial radio.
Comment