I have a late 2015 21.5 inch iMac and last week I noticed the 1TB HDD was louder than usual, it seemed to be churning way more than usual. I opened up disk utility and ran First Aid, this reported the drive as having no issues. I then downloaded SMART Utility and low and behold the drive status was showing as "Failing". The exact reason was 'reallocated sector count = 21'. To verify this, I downloaded DriveDX and this too reported the exact same error (although oddly it also gave a green light for both drive health and performance - 79% for performance to be exact)

I contacted Apple support as I have 6 months AppleCare remaining and told them the results of the two utilities. I was asked to run their diagnostic tool which came back as ADP000 - No issues found. Due to this, they were not interested in granting a replacement for the drive.

Instead of sitting here waiting for a drive to fail, I took some advice from here and bought an external 500GB Sandisk SSD drive. As per the instructions, I re-installed Mojave but this time pointing it to the SSD rather than the HDD and the result is mind-blowing, it feels like a new machine and with the bonus of not hearing any HDD noise.

I'm liking it so much that I'm tempted to keep things this way longterm, but with the OS literally being run from a drive connected via a USB 3.0 port, am I potentially putting any more damage/strain on the iMac, with everything now constantly being written/read through the USB to the drive?

I used an external SSD for years and I've not had any issues
Reactions: MSastre, Kargo and ChrisChaval

Working great, no problems at all

Mojave even allows for APFS on external SSDs connected via USB 3
Reactions: Kargo

"I'm liking it so much that I'm tempted to keep things this way longterm, but with the OS literally being run from a drive connected via a USB 3.0 port, am I potentially putting any more damage/strain on the iMac, with everything now constantly being written/read through the USB to the drive?"

No.
Your "concerns" are totally unjustified.

I have a late-2012 Mac Mini which I bought in January of 2013.
From the very day I took it out-of-the-box, I've been booting and running from a USB3/SATA dock with an SSD in it.

It runs as well today as it did the first day I used it.
Reactions: MSastre, ChrisChaval and Kargo
K

Thank you all for the responses, its put my mind at ease in using my Mac this way
Reactions: ChrisChaval

It won't strain the mac as as you found, it works so much better. However, I would have a slight mechanical concern.

If you happen to knock the USB cable or a visiting child / friend 'accidentally' unplugs it, while the mac is busy running off it, it could result in data corruption and a non-booting mac.

Modern SSDs and USB3 are quite resilient to being unplugged while busy, however I wouldn't be keen to risk it for a data-only usb SSD. As for a system OS SSD, god only knows.

You could consider taping down the USB connection so it's a bit more knock-proof. And make sure your backup systems are fine.

(If all you have is Time Machine, hmm, I'm not as keen on TM as I used to be. It's showing its age, and Apple are refusing to say if it has a future or not.)
Reactions: Kargo

"If you happen to knock the USB cable or a visiting child / friend 'accidentally' unplugs it, while the mac is busy running off it, it could result in data corruption and a non-booting mac."

Never had a problem with this, not once in almost 6 years of booting externally from a USB-connected SSD...
K

My next question - when booting from an external SSD, is it better to sleep the iMac or shut it down completely? Am I right in thinking when the Mac is in 'sleep' mode, the SSD will continue working as not to interrupt the OS?

I never have a problem with "sleep".
But... I have my Mini set to "never" sleep (unless I go to the Apple menu and command it to go to sleep)
I -do- have a hot corner set to put the display to sleep (darken the screen).

If I'm going to be away from the Mini for a while, I just reach and turn the display off, and leave the Mini idling.

It's my standard practice to SHUT IT DOWN at night, or when I'm going to be away from it for a while.
K

Thanks all,
I can't quite believe the transformation simply in buying a $100 external SSD and connecting via USB 3.0. It feels like a new machine.

A speed test of my internal HDD which was the start up disk since new in 2016: 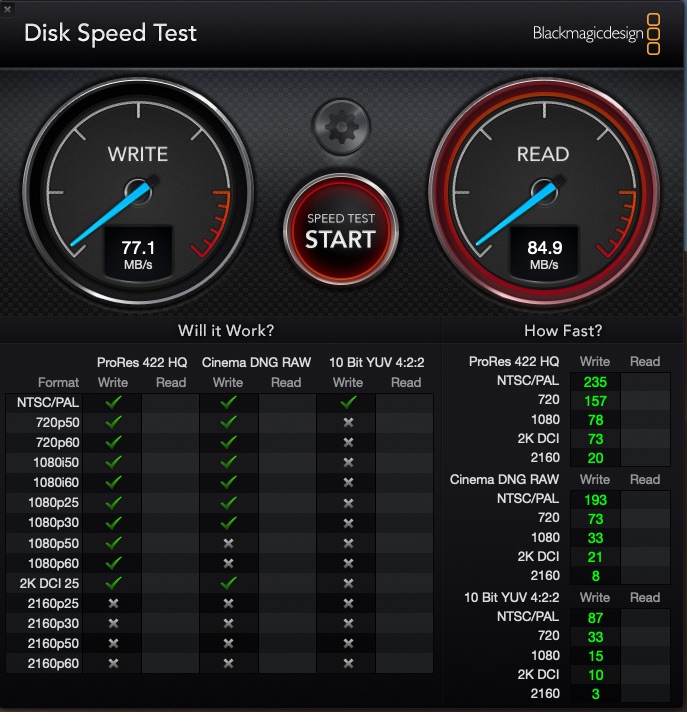 The external SSD now being used as a startup disk: 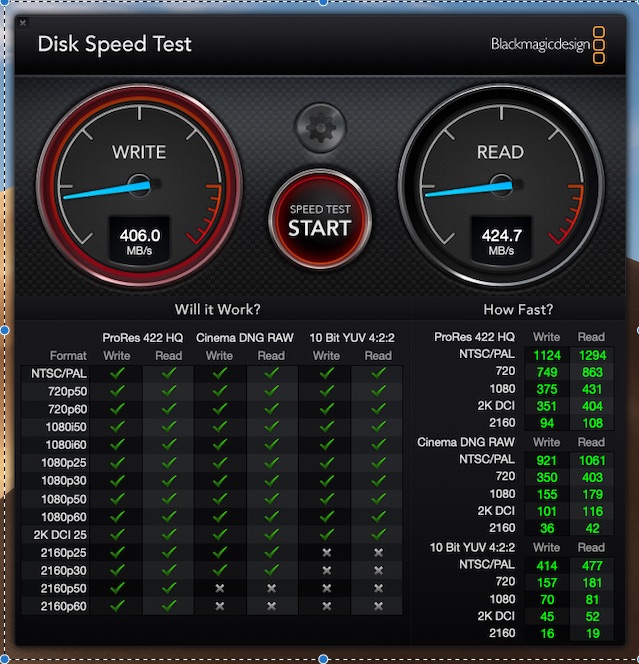