Kik Messenger for iOS officially opened a dedicated bot store yesterday that allows anyone to create chat bots for use within the app.

Chat bots are automated chat accounts that are programmed to deliver specific content or services when users interact with them, sidestepping the need to download a separate app to access the service or content in question.

The popular teen messaging app Kik has been host to a handful of commercial bots offering services with limited interaction since 2014, but the launch of its 'Bot Shop' opens the door for third-party developers to build bots for the platform with genuine two-way interaction. 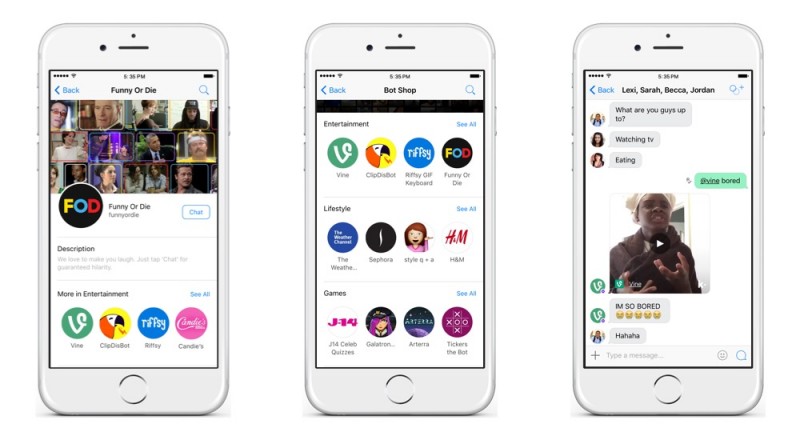 Currently the store is host to 15 bots including games and services from established companies such as Vine and The Weather Channel. Kik users can access the store via the tab used to create new chats, while developers can get everything they need to start building bots at dev.kik.com.

Bots are increasingly gaining traction in the mobile communication space, thanks to advances in natural language processing that allow artificial intelligence-based services to be baked into existing chat apps.

Last week Facebook Messenger gained an airline information bot that allows users to receive booked flight information updates, while Facebook is expected to announce its own bot store for Messenger at its annual developer conference next week. Meanwhile, Microsoft announced the introduction of Skype bots including Bing Music, Bing News, and Bing Images, with the promise of more to come.

Kik is a free download on the App Store for iPhone and iPad. [Direct Link]

From the Kik Bot Developer Dashboard:

On Kik’s chat platform, developers can build, grow, and (soon) monetize for a highly engaged teen audience. About 40 percent of U.S. teens use Kik.

Is this all we developers are interested in? Monetizing? Specifically monetizing the youth in our society? Can we not aim a little higher?
Comment
Z

I have no idea what this article is talking about.
Reactions: VictoryHighway, S G, SBlue1 and 4 others
Comment
H

Perfect example of a bot-generated article.
Like Homer would say: "Who's doing what now?"
Reactions: Futurix
Comment
L

RightMACatU said:
Perfect example of a bot-generated article.
Like Homer would say: "Who's doing what now?"
Click to expand...

I am waiting for everything to go wrong like it did with the Microsoft bot. Maybe it's harder for teenagers to corrupt a learning machine? Maybe Twitter users are just dirty birds..
Comment
2

My CoC clan uses Kik to communicate outside the game. I tried it, but did not care for it too much. Then again I am not a teen. Maybe I can create a bot to talk to my teen CoC mates.
Comment