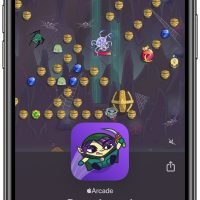 Roundguard is a bouncy dungeon crawler with pinball physics, lots of loot, and a randomized castle full of oddballs. Press your luck against hordes of dangerously cute monsters and challenging roguelike elements in this all-round bouncy adventure!

If you love roguelikes & Peggle, then Roundguard is for you.
Click to expand...

Roundguard is available on the App Store with an Apple Arcade subscription. The subscription-based service provides iPhone, iPad, Apple TV, and Mac users with access to over 100 games with no in-app purchases or ads for $4.99 per month or $49.99 per year.

Apple Arcade is the dumping ground for games that can't make it on their own.
Reactions: trsblader and decypher44
Comment
W

calzon65 said:
Apple Arcade is the dumping ground for games that can't make it on their own.
Click to expand...

The irony is that some of these games I'd like to buy outright, but I'm not subscribing to yet another platform, so everyone loses.
Comment
T

calzon65 said:
Apple Arcade is the dumping ground for games that can't make it on their own.
Click to expand...

Yes and no. Some are things that would be ruined with freemium. King's League II is a very good game, and it's a lot better on Apple Arcade than it would have been as freemium.
Reactions: amartinez1660 and CarlJ
Comment

Argh, every time one of these threads comes along I have to download the game and enjoy it, just to spite you people.
Reactions: CarlJ
Comment
J

Oceanhorn 2 was the only reason to get Apple Arcade and I put alot of hours into that... the ending was horrible though and I immediately unsubscribed after beating it. Would rather have paid $10 to just buy the game
Comment

I tried Arcade for a month, and none of the games held my interest for very long. What I hoped there would be a few of were 'Gauntlet' style games. And I don't mean ones where you have funny creatures who bounce into and delay your progress. Yes, I liked having opponents who fought back and not just got pushed out of the way. I also disliked playing with either a mouse on a computer or the really horrible ATV remote. Yes, you can use Xbox or Playstation or 3rd Party controllers. None of which I own, and I didn't want to buy them just to try the games. At least the Wii had sports with semi normal gravity and a controller you could accidentally throw through your screen. I seem to be in between two extremes: the 'all violence is bad' games and the 'ultra violence is good'. Doom, Grand Theft Auto and COD are too violent, and the Apple arcade games are too boring.
Comment
You must log in or register to reply here.
Share:
Facebook Twitter Reddit Email Share Link
Register on MacRumors! This sidebar will go away, and you'll see fewer ads.
Sign Up
Top Bottom