Buying Advice Requested, The More I Research The Less I Know

New member from the UK here. Since getting my 1st ipad my computer use has become entirely tablet based. So I am horrendously out of date. I have no computer/software skills I’m just a user with a love of tech and gadgets. I've been lurking since 2007. So despite coming to the conclusion that my next purchase will likely have to be a windows machine I feel more comfortable asking for advice here.

Due to poor health I’m mostly housebound. I’m a writer and artist who’s worked up until now exclusively with canvass and paper. I suddenly find myself in a position where I can follow my hobbyist dream of learning how to be a digital artist. I’d hoped to purchase a surface studio 3 but it seems to have been delayed and I can’t wait.

My budget is around £6k to include the tower, monitors, graphics tablet and accessories such as a means of scanning the map if photography is not viable. I have just purchased a surface book 3 and ipad pro out of desperation following many failed attempts to purchase a dell system during their recent sale. They haven’t arrived yet, but yes I have buyers remorse, and no I probably won’t return them unless my £6k is insufficient.

I’m happy to purchase something that is overkill for my current needs as I’ll never be in a position to make such a purchase again and I want it to last at least 10yrs. What I’m fearful of is blowing the cash on stuff that doesn’t meet my needs and/or buying something that is incompatible with other purchases.

So I have the 15 inch touch device, but want a larger non mobile graphics tablet, 3 monitors and a tower. But the more I research the more I realise how abysmal my knowledge is. I don’t even know if my use case is possible with the budget I have and every attempt at using a retailers custom build facility ends in utter confusion.

My use cases are:

1. As I get older the more I look back. My main project is something I began when I was 12. I would like to create a fictional digital 3d space habitat world that’s fully zoom-able. I’ve been writing stories for this world for many years and until recently was resigned to the fact that I would only ever be able to recreate small parts of it on paper. This habitat will be a minimum of 1 million miles by 1 million miles. The level of detail will need to be down to individual characters animals, boulders, trees, streams, paths, shacks and everything bigger than that. It won’t need to be interactive/animated beyond me making changes to the maps as time in the world passes. So for example settlements will grow into cities, trees will be cut down, mountains will be quarried, rivers will alter their course and climate will change etc.

2. For the last 2yrs I’ve been working on several really large fictional paper (pencil and ink) maps that are part of the world described above. One is currently over 80 A1 sheets in size and I plan to make it at least 300 A1 sheets in size. I’m about to lose access to a large space that has been very helpful in managing these projects. At home I only have space for 1 sheet of A1 at a time, which results in much time wasted correcting errors. My ability to retain a mental image of the project topped out at around 50 sheets. Therefore I need to digitize them for the purposes of managing them.

Other uses in no particular order:

Creating a database comprising of at least 10,000 characters from this world to include names, ages, family trees, occupations, relationships, skill sets, possessions livestock and home addresses. I’ve already done a pen and paper version of the first 600 residents at one of the towns.

I’m so far out of touch with computing performance that I don’t even know if it’s possible. I fear that simply scrolling across the map will bring my shiny new PC to a grinding halt. Do I need high base clock speeds with less cores or more cores at lower frequencies. I’m also lost when it comes to intel core, xeons, or AMD Ryzens and threadrippers. I’m similarly lost with GPUs. I’m hearing good things about rtx3080s but I don’t even know if that’s a suitable chip for my needs, and I'd like to avoid water cooling if possible.

Additionally I need advice on monitors. I originally foresaw 3 27 inch 4k USB Cs as my best bet but I’m really liking the idea of 2 4ks and an ultrawide. I originally thought that choosing the monitors would be the easy part and I’d just get some dell ultrasharps but reviews say their build and workmanship has plummeted. I’m also fearful of blowing all this cash on a set up that can’t do what I want. Is 4k even a wise choice? I’ll also need 2 out of the 3 monitors to have full adjustability including portrait mode.

Additionally I’ll need software that can accomplish my needs but I will never buy on a subscription model so Adobe is out and as I have no pre-existing software skills I am not already stuck in an ecosystem. I will also never ever purchase anything by HP.

Before you guys try to explain how monumental of a task I’m giving myself I already know and am not even slightly deterred or intimidated by it. This project is no1 on my bucket list above even seeing the northern lights.

Finally, I really need to make this purchase in the next 24 hours. It’s a long story but that’s where I’m at. Sorry for the wall of text but I know how important ‘use cases’ are when asking for buying advice.

Over the hill and far away

There is a lot in your requirements, if you are in such a rush then putting parts together for a suitable build is going to take longer than you have. So:

Create, paint and edit at light speed on the New Surface Studio 2. Unlock immersive experiences on the fully adjustable and versatile 28″ touchscreen, now with Intel® Core™ i7 processors.
www.microsoft.com
M

Thanks for your response I appreciate it. Yep I know I'm asking a lot. I've been trying to make a purchase for over a month and am now down to the wire. Even just some help on whether I can get something that will enable me to do my number one use and whether a rendering orientated spec is what I need. I don't even know if it's possible to get close to the spec for that with my budget. I don't want to fork out on a threadripper or choose a graphics solution that's wrong for that use but it's looking like I'm gonna have to pull the trigger and hope for the best.
S

Don’t mean to make anyone sad but I want to point out potential issues.

What you have described would take a team of 5 people several years to create with $100,000 in hardware. I know because that's what I do for a living (games, tv, vfx, etc). However, you sound focused and determined and I bet you could pull it off in less than 10 years with the right setup.

First question: Why not mac? You don't want the tools getting in the way of your creativity and that's exactly what Windows will do. Macs are designed to get out of your way and let you work. They also last a really long time (10+ years).

Second is software. For the record, Adobe subscription is the exact same price as outright purchase unless you never plan on upgrading so don't rule it out. It's a staple tool of choice for active studios. That said, Affinity Designer could be a good choice for the map. It zooms to 1,000,000% so you could keep the entire map in a single document. Not recommended, but it's doable. Another option (perhaps more suitable) is Campaign Cartographer, one of the most popular mapping solutions out there. It is Windows only though so if that's what you need, the imac may not work out.

Third, hardware. Check out the triple monitor imac setup below. If that looks like what you want, it will cost about £6,000. Perhaps more if you want to add extras like external drives or cameras or scanners. I've purchased upwards of 50 Dell Ultrasharp monitors over the last 10 years or so and I can say that their panels don't have blacks like they used to but they are still excellent. The U2720Q is a good choice. Otherwise, look at the Asus Proart line, designed for creative work.

My gut feeling is that your budget is too small, regardless of time. You need a fairly high baseline to accomplish all of that. Either bump it up several thousand more or curtail some of your expectations. 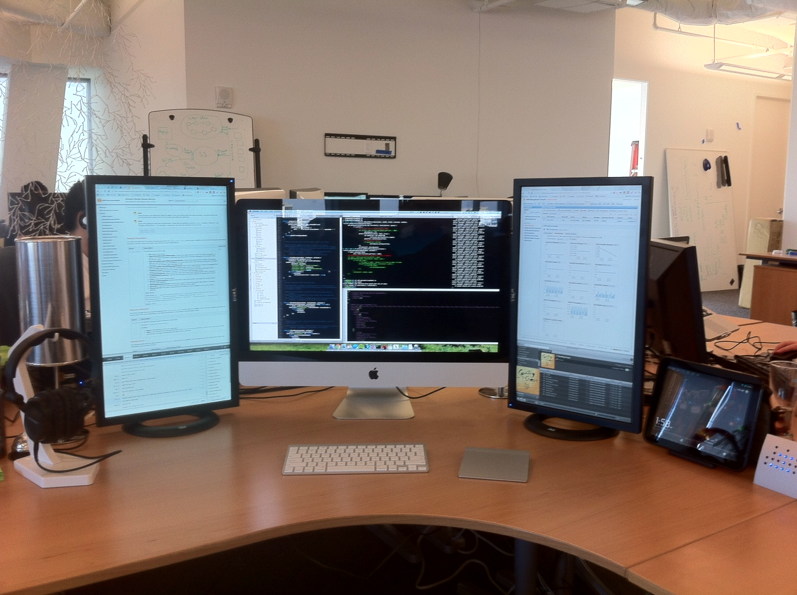