LOS ANGELES  California has more Chihuahuas than it can handle, and it has Hollywood to blame.

There are so many Chihuahuas at shelters in Oakland, they have started shipping the dogs out of state, said Megan Webb, director of Oakland Animal Services. They have sent about 100 to Washington, Oregon and Arizona, she said, "and as soon as they get them, they are ready for new ones."

Chihuahuas make up 30 percent or more of the dog populations at many California shelters. And experts say pop culture is to blame, with fans immitating Chihuahua-toting celebrities like Paris Hilton and Miley Cyrus, then abandoning the dogs.

"We never have enough supply for the huge consumer demand for small dogs," she said.

One of Webb's biggest problems is a lack of money to fly the dogs to other states. Buchwald said she would be happy to help.

"Nothing is outside the realm of possibility here. We have a supply-demand isssue," she said.

Chihuahuas are the most popular breed of dog in Los Angeles, so it makes sense it is the most abandoned breed, said Madeline Bernstein, president of the Society for the Prevention of Cruelty to Animals Los Angeles. In Oakland, some days, they get 10 of the 5-pound dogs a day, Webb said.

The problem is so bad that shelters all over California that were built for big dogs had to remodel to accommodate the little guys
Click to expand...

Poor California, they even have problems with their dogs.

So, people go out and buy Chihuahuas, keep them for a few weeks, decide they don't like little rats as pets, and then drop them off at the shelter? Weird.
Comment
D

Those who purchase a pet as a fashion accessory should be banned from owning pets - full stop.
Comment

themoonisdown09 said:
So, people go out and buy Chihuahuas, keep them for a few weeks, decide they don't like little rats as pets, and then drop them off at the shelter? Weird.
Click to expand...

Aw! Poor little guys I hope they all find a nice loving home. I know in PA they would LOVE to get Chihuahuas in.
Comment

I have 4 dogs... otherwise I'd adopt one just cause.
Comment
S

themoonisdown09 said:
So, people go out and buy Chihuahuas, keep them for a few weeks, decide they don't like little rats as pets, and then drop them off at the shelter? Weird.
Click to expand...

Take any breed and use them as a fashion statement and see how they turn out.

I have 2 little guys and there great. We go to the dog park "every day" and they socialize with all the other dogs and everyone comments how there not what they assumed them to be like at all. 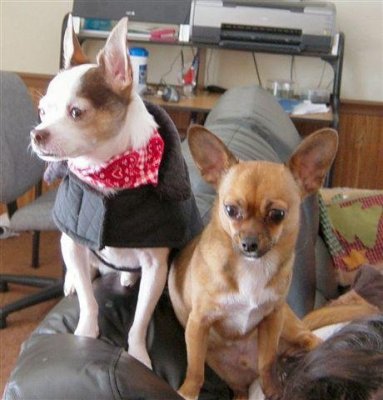