Can't change file names AT ALL

I've seen similar threads to my problem, but none that appear to address it specifically.

When I 'got info' on each of them, I clicked the padlock icon to unlock them. I got a popup window asking me to enter my user password. I then closed the 'get info' window. They were still grey and uneditable. I hit 'get info' again and in every case, each one I had supposedly unlocked was still locked. I was still unable to change the file names.

If I try and copy them to another folder, it tells me the files are 'in use' by some other application. They aren't. I tried rebooting Finder. No success.

I tried the same on the containing folders; same results. Files that were already unlocked were fine. I have no idea why some are, and some aren't. This is proving enormously frustrating and I've already wasted half a day searching for and failing to find a solution. I've tried changing the settings of and disabling Time Machine. That didn't work either.
'
Some info: the files are contained in a subfolder in Dropbox. I'm running Lion 10.7.3 on a two-year old Macbook. Help!

Have you checked Finder > select file >> GET INFO >>> Sharing & Permissions yet and seen, if you have proper permissions? 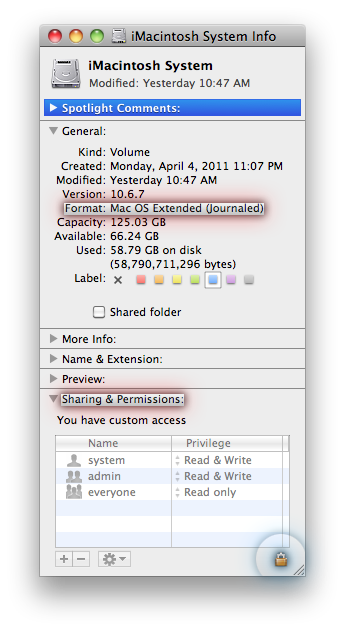 In the Get Info box, I have:

'GaryGibson (me)' with read and write selected.
Below that is 'everyone (read only)'.