CBS Sports this week announced it will expand its streaming NFL coverage on the Apple TV, with plans to stream two regular season games, four playoff games, and Super Bowl 50.

The games will be available on laptops, computers, and tablets via CBSSports.com, in addition to being available on connected television devices like the Apple TV, Roku, Xbox One, and Chromecast. Games will be streamed live and will be free to watch, with no cable authentication required. 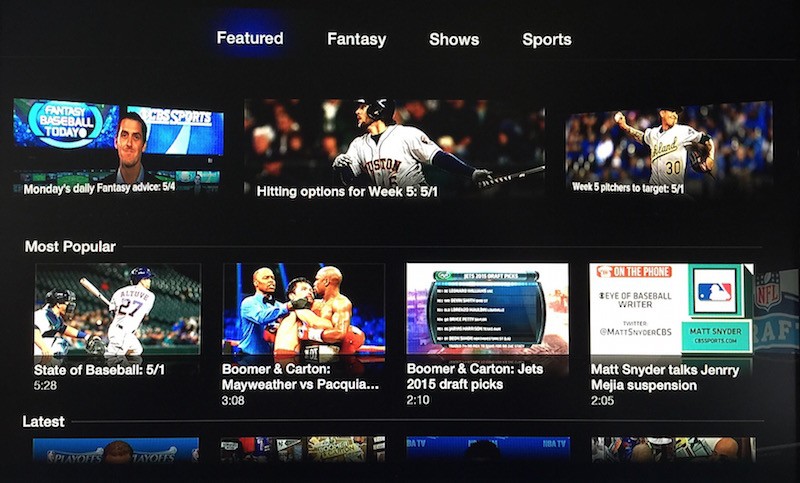 New York Jets vs. Miami Dolphins in London will be the first regular live game streamed for free, and it will be broadcast on October 4 at 9:30 a.m. Eastern Time. The second regular season game CBS will show is the Carolina vs. Dallas on November 26 at 4:30 p.m. Eastern Time. AFC playoff coverage will also be streamed, including Wild Card, Divisional, and Championship games.

"We're very excited to offer more NFL ON CBS streaming coverage across more digital platforms than ever before," said Jeffrey Gerttula, Senior Vice President and General Manager of CBS Sports Digital. "All NFL fans will have access through their computers, tablets and now Connected TVs to two regular season games for the first time in addition to all of the AFC playoff action, culminating with a truly historic Super Bowl."
Click to expand...

While CBS will be streaming NFL games to connected television devices, computers, and tablets, most iPhones will not be able to be used to stream CBS NFL content due to contractual agreements with Verizon. Verizon iPhone owners will have access to streaming content through the NFL Mobile app.

This is actually pretty awesome. The Super Bowl is the only NFL game I care to watch every year but I usually have to find a friend with cable to view it.
F

I just might subscribe to Apple TV to strike back at my local cable monopoly. That would be my only reason
2

Superbowl was available for free online last year.....4 playoff games, an antenna will get you double that.
Reactions: Twinsbb17

Feels like CBS and NFL are testing the waters for something bigger down the road
Reactions: 4jasontv
2

dwaltwhit said:
Feels like CBS and NFL are testing the waters for something bigger down the road
Click to expand...

Don't hold your breath. NFL is still in denial about CTE.
D

If you live in a place with a signal that's clear, sure. For me even though Fox transmitter is 37 miles away, and CBS is 36, they're in very different geographic locations and I can pick up the Fox station without a problem where the CBS one is far less consistent, so I'd much rather stream if possible.
Reactions: Val-kyrie

2010mini said:
Don't hold your breath. NFL is still in denial about CTE.
Click to expand...

They are also scrambling to fix their image after how they handled "deflategate" and other player infractions. The NFL's image isn't exactly squeaky clean right now, and large customer friendly innovations would work well to distract fans. All of this can be "free" in beta, but don't worry, they will recover their revenue stream soon enough.

I'm hoping for just the commercials on a separate all-in-one presentation.
K

But if you've actually tried watching with an antenna or the online steam last year, you know how much they suck. The stream kept cutting out and you risk a crappy picture with an antenna.

The stream via Apple TV could be much better.
2

keifer.street said:
Sure you can get it OTA with an antenna. Sure you can watch the stream online.

But if you've actually tried watching with an antenna or the online steam last year, you know how much they suck. The stream kept cutting out and you risk a crappy picture with an antenna.

The stream via Apple TV could be much better.
Click to expand...

I went to a friends house to watch the Super Bowl he had Fios on one TV and OTA antenna on another TV in the house. The picture from The antenna looked way better!
You must log in or register to reply here.
Share:
Facebook Twitter Reddit Email Share Link
Register on MacRumors! This sidebar will go away, and you'll see fewer ads.
Sign Up
Top Bottom