CES 2012: Belkin Thunderbolt Express Dock to Launch in September at $299

Last September, we noted that Belkin was showing off a new Thunderbolt docking station at the Intel Developer Forum (IDF), preparing to offer users a single-cable dock connection three USB ports, a Gigabit Ethernet port, and a FireWire port, as well as inbound and outbound Thunderbolt ports for daisy chaining. 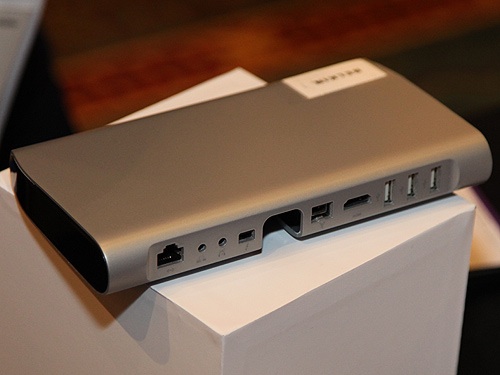 - Quickly connects into a desktop workstation and instantly accesses multiple devices with a single cable
- Adds reliable, gigabit Ethernet connectivity to your laptop
- Includes three USB 2.0 ports, one Firewire 800 port, one HDMI port, one 3.5mm Audio port, one gigabit Ethernet port and two Thunderbolt ports (one upstream and one downstream) for daisy-chaining to another Thunderbolt compatible device.
- Utilizes Thunderbolt Technology for data transfer rates of up to 10Gbps bi-directionally
Click to expand...

The company had previously claimed following the publicity surrounding the dock's appearance at IDF that it would begin shipping in "spring 2012".

Still way too much money and the abscence of USB 3.0 is a deal breaker. Cut the price in half and add that and then you have a product people will want to buy.

I guess that's cheaper than a 999$ display. Frankly, it's a bit too expensive for my taste, I'd rather just plug 2 cables and save the extra over my plain USB hub.

Hmmm... where in the picture is the HDMI port?

Too much money and too late.
N

I'm sure it's HDMI through a display port adapter knowing them.

Also, no USB 3.0...really guys? Crazy expensive for nothing. No thanks, I'll pass.
E

What a rip. It should include a ESATA port min.
D

The words crazy and ridiculous come to mind.
D

Wow. $150 with USB 3.0 and they've got a winner. Now the Thunderbolt display doesn't seem too bad.
I

They shouldn't bother, i can't think of a single person who would ever buy one of these for $50 let alone $300.

I hope this isn't what Jobs meant when he said 'cheap adapters' when referring to Thunderbolt.

But I suppose the more of these adapters that come out the cheaper they can get or the more other brands may come out. When Thunderbolt to eSATA/SATA adapters come out for under $50 let me know (Considering that FW800 to SATA adapters are higher then that I think I'll be waiting a while)
B

So the product is delayed half a year and price is at least 3 times what anyone would expect... Maybe this isn't the year for me to upgrade to a Thunderbolt capable Mac.

Snoeiman said:
Hmmm... where in the picture is the HDMI port?
Click to expand...

I think there's two ports on the back, kind of up underneath: an HDMI and another TB port. The front looks like

And they indicate 2 TB ports, so I'm assume #2 is hidden along with the HDMI[?]
A

Man, this makes the Apple Thunderbolt Display look like an even better deal. Shame on Belkin for trying to rape users with that product at $300.

We are looking for Macbook Airs for teachers in my school district, we would need something like this for the teachers desk. But at $299 a piece is a bit much. Currently out Hp Docking stations are $75.

Is there anything else like this around that is currently available?

good luck with that Belkin. TB is looking like a bag of hurt.

This makes the Apple Thunderbolt display even more justifiable, considering a dell of similar size, resolution and quality is only around $100 cheaper.

But the main reason I am hesitant on the Apple Thunderbolt display is because its only input option is the TB cable. My current Acer model can have my MBA, PC Desktop and one other thing over HDMI plugged in at the same time, so it is kind of hard to accept the downgrade in connectivity with the jump in price.

They could have just added one mini-display port to the back and had autos-witching and a touch sensitive apple logo to switch inputs manually.

Anyways, this would be a bit more tempting if it were also portable (To be used on the road with a MBA for ethernet+extra USB), but they decided to make it look nice on your desk instead. So essentially for me, $300 to plug in one less cable at my desk. No thanks.

In a false sense of reality...My Mind!

Geez, way too much money and not until Sept. what were they thinking
K

basesloaded190 said:
Still way too much money and the abscence of USB 3.0 is a deal breaker. Cut the price in half and add that and then you have a product people will want to buy.
Click to expand...

I completely agree, this should be USB 3.0 with backward compatibility to slower USB devices.

If they add USB 3.0 and an ExpressCard 34 slot or eSata ports, then I could see the $300 price point. As it is, it's just under 1/3 the price of a 27" thunderbolt display, with no clear advantage as far as docking is concerned.

People have babies quicker!
A

This is more appealing to Air users than MacBook Pro

its taken them over a year to come up with this fairly simple solution, and have priced it at an outrageous $300?

Just because it's thunderbolt doesn't mean its a $300 part.