Ahead of the kickoff of the 2016 Consumer Electronics Show, Belkin today introduced its latest product for the Apple Watch, the Watch Valet Charge Dock. The Valet is Belkin's second dock to feature an integrated magnetic charger, meaning customers do not need to supply their own Apple Watch charging cable.

The Valet Charge Dock features a weighted base with a sleek white finish and a solid chrome arm that holds the Apple Watch at an ideal viewing angle. With an included wrist band support, the Valet is able to work with all Apple Watch models. Because it works in portrait mode, the Valet cannot be used with watchOS 2's Nightstand mode. 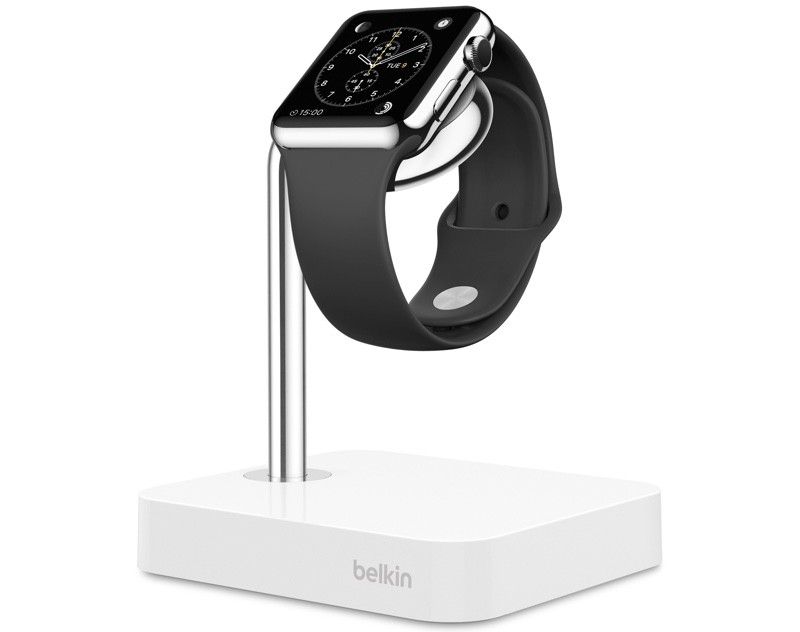 Power is supplied to the Valet Charge Dock through an included 4-foot USB cable, which plugs into the back of the product. At 75 x 85.6 x 100.6mm, the Valet Dock is small enough to fit neatly on a desk or bedside table.

Belkin's first integrated Apple Watch dock, the Charge Dock, was introduced in October. The Charge Dock, which also includes an integrated Lightning cable for charging an iPhone, is priced at $129.99 and is already available for purchase from the Belkin website.

"Following the success of the first Belkin integrated charging solution with support for the iPhone and Apple Watch, the Belkin Valet Charge Dock for iPhone and Apple Watch, we are excited to offer a second charging solution that also provides a seamless charging experience for Apple Watch users, Watch ValetTM," said Melody Tecson, Director of Product Management at Belkin. "The new Watch ValetTM Charge Dock is the perfect accessory for customers who are looking for a standalone solution for their Apple Watch."
Click to expand...

Belkin's new Valet Charge Dock is priced at $89.99 and is available from Belkin starting today.

There is absolutely no reason why you would want this instead of the $30 cheaper TwelveSouth Forté.
Yes this has an integrated puck but it looks the same as the Forte (in fact I would say it looks tackier) and doesn't have nightstand support.
Comment
S

I still haven't found a watch stand design that I truly love. The NightStand by Elevation Labs is simple and clean in a small package, so I went with that. I like it—very minimal and I can mount it vertically on my bed post. It does the job.

I've got some mockups for a stand that I designed in Illustrator when I was bored one day and inspiration struck. And I've got another idea for a folding design. But I have little idea of how to bring a product to market. So it will just sit on my SSD.
Comment