After initially launching a thermal camera that doubled as a case for the iPhone 5 and iPhone 5s, at CES this year FLIR Systems has now expanded its line of thermal imaging smartphone accessories with a professional grade FLIR ONE Pro. The company also introduced an updated version of the original FLIR ONE thermal camera attachment.

The Pro line of the device works like the other versions by connecting to the bottom of an iPhone or Android smartphone, through a Lightning or USB-C connector. It also has a small wheel that users can toggle to extend the connector to adjust its length, making it possible to use the Pro with thick-skinned protective cases - like LifeProof and OtterBox - often seen on professional work and construction sites.

The all new FLIR ONE Pro is a must-have for any inspector or contractor's toolbox. Combining enhanced high resolution MSX imagery with powerful measurement tools and report generation capability, the FLIR One Pro works as hard as you do, almost.
Click to expand...

Concerning its thermal abilities, the FLIR One Pro can measure temperatures on any spot in a scene between -4°F and 248°F (-20° to 120°C) and capture the images with a resolution of 160x120 pixels, double that of the third-generation FLIR ONE. The Pro model also packs in what the company calls "VividIR" to fuel the accessory's "powerful image processing" so users can get crisp and clear details from each thermal image. 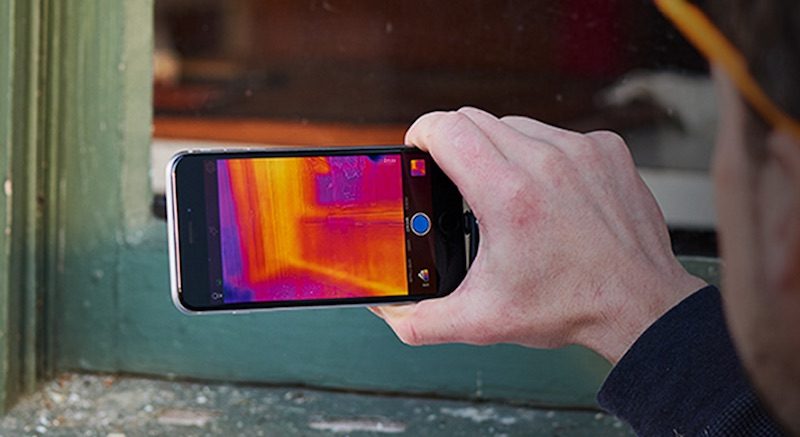 Due to its professional designation, the FLIR ONE Pro comes at a higher price of $399.99, while the basic FLIR ONE will cost users $199.99. FLIR Systems has shared a collection of images taken with the thermal camera attachment on its website, as well as detailed a few areas where the accessory can be used, for anyone curious.

If only I had 200-400 to drop on a cool toy like this. Toy for me. Could be very useful for professionals that need a simple/easy/quick way.
Reactions: Happy-Mac

This is cool if I want to be the next predator to hunt my preys!
Reactions: Happy-Mac

I've seen one of these in action. Very impressive stuff.
Reactions: Happy-Mac

So now more people will be able to swipe the PIN from your credit card? Great.
Reactions: Happy-Mac
H

AlliFlowers said:
So now more people will be able to swipe the PIN from your credit card? Great.
Click to expand...

This genuinely made me laugh.
Reactions: AlliFlowers

How would this affect the iPhone's battery life? Any specifications on this? For $400.00, I would want information on this before purchasing.
Reactions: Happy-Mac
Z

Relentless Power said:
How would this affect the iPhone's battery life? Any specifications on this? For $400.00, I would want information on this before purchasing.
Click to expand...